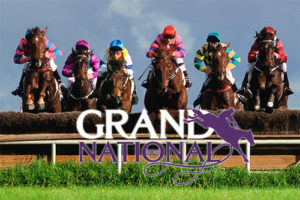 Looking to bet on something a little bit different this year? The Grand National is the perfect way to scratch that itch.

When it comes to horse racing, you don’t find many more unique events than England’s historic annual steeplechase in Aintree, Liverpool. Known as “the ultimate test of horse and rider,” the Grand National’s four-mile, 30-fence obstacle course makes for a compelling watch for even the most casual of equine enthusiasts.

In this Grand National betting guide, we’ll explain more about Europe’s most lucrative and prestigious jumping race. By the end, we’re sure you’ll not only see why the Grand National is the most popular event to bet on in the entire United Kingdom and is watched by more than 600 million people across the world, but you’ll also want to be part of the action.

When Is the Grand National?

The Grand National takes place every year in early April, on either the first or second Saturday of the month. The event is the culmination of the three-day Aintree Grand National Festival and is currently known as the Randox Health Grand National Steeplechase.

Organizers recently made the decision to hold the Grand National later in the day in order to avoid conflicts with other sporting events going on at that time of year, particularly soccer matches. Post time for the steeplechase is now typically set for 5:15 p.m. local time (11:15 a.m. Eastern).

Best Sites for the Grand National

The unique format of the Grand National makes it an appealing event to wager on for even the most novice of gamblers. That’s music to the ears of online betting sites, some of which look to prey on uneducated bettors by offering lucrative bonuses that they don’t intend to honor, unfair odds, and other shady practices.

Any conversation about former Grand National winners has to begin with Red Rum. The legendary gelding dominated steeplechases through the 1970s, winning an unprecedented (and since unmatched) three championships while finishing second two other times. Red Rum’s greatest triumph was his first in 1973 when he stormed back from 30 lengths behind.

Here’s a list of all the winners in Grand National history (multi-time winners are indicated with an *):

The Grand National track at Aintree is 2 ¼ miles long, requiring horses to complete two full laps. Over the course of the race, horses will need to successfully navigate 30 obstacles, including 14 fences that they need to clear on each lap and two fences that they’ll jump just once during the race.

The first fence of each lap is located close to the starting line, allowing both horse and jockey to have a good view of it before they begin. The third (and 19th) fence is the first major test, featuring a 6-foot ditch in front of a 4-foot, 10-inch fence. The 8th (and 24th) fence is also a significant challenge, requiring the horse to clear a 5-foot fence and then make an immediate 90-degree turn to the left to avoid landing in a canal.

Fence 15 is the highest fence on the track, standing at 6 feet tall with a 5-foot, 2-inch ditch directly in front. Known as The Chair, Fence 15 is used on the opening lap only. The final hurdle horses face in the Grand National is Fence 16, which substitutes for Fence 15 on the final lap and is followed by a 494-yard sprint to the finish.

Fence 6 is the most famous fence at Grand National, but it’s not as grueling a test as it used to be. Named “Becher’s Brook” in memory of Captain Martin Becher’s fall from his mount in the inaugural race, the 4-foot, 10-inch fence once featured a 5-foot, 6-inch brook on the landing side that has since been filled in to make the course safer.

Times at the Grand National have come a long way since Lottery plodded to victory in the inaugural event. Lottery’s pace in that race was 14 minutes and 53 seconds, which remains the slowest-ever winning time in Grand National history.

The fastest time ever recorded in the race was the 8-minute, 47.8-second clocking by Mr Frisk in the 1990 event. Only one other horse in recent history (Many Clouds, 8:59.1 in 2015) has completed the course is under nine minutes, although each of the last 17 Grand National winners has finished in under 10 minutes.

Although the Grand National’s handicapping format (the higher-rated horses need to carry more weight) is designed to result in very competitive races, there have been times when horses have won by significant margins. Those occasions have usually been due to extenuating circumstances such as an accident on the course or poor weather conditions.

We weren’t able to find any actual record for the biggest winning margin in Grand National history, but it’s likely that no race has been decided by more than the 15 lengths by which Foinavon prevailed in 1967. (We’ll explain much more about that memorable race in the upcoming section about the Winner with the Highest Odds.)

The Grand National field is currently limited to 40 horses at the most, but the event used to allow larger fields than that.

The all-time record for most entrants in the Grand National is the whopping 66 horses that entered the 1929 race. Only nine of those horses were able to finish, four of whom paid 100:1 odds or more (including race winner Gregalach). Criticism of the massive field quickly followed, and organizers increased the minimum age from five years to six in 1930.

Only 10 horses participated in the 1883 Grand National, marking a record for the smallest field that still stands today. The low number of entries was likely related to how poor the conditions were in the 1882 race when heavy snow and icy conditions led to just 12 participants. The field grew to 15 in 1884 and was up to 19 in 1885.

Winner with the Highest Odds

In an event like steeplechase, a lot can go wrong for even the biggest of favorites. In the history of the race, 63% of the participants have not finished, and only 15% of the favorites have prevailed. That’s why there’s usually a lot of value on the dark horses in the Grand National, where winners at long odds have been fairly common over the years.

In fact, the Grand National has seen 100:1 longshots claim the trophy on numerous occasions. The most recent time came in 2009 when Mon Mome delivered a huge return for her backers with a 12-length victory over defending champion Comply Or Die. Only 17 of the 40 entrants completed the race.

Prior to that, the last 100:1 winner in the Grand National was Foinavon in 1967, a horse whose chances were so bad that several jockeys turned down the opportunity to ride him. A massive collision at Fence 23 wiped out many jockeys and horses, but Foinavon was so far back of the pack at that point that he was able to steer clear of the accident. By the time some jockeys were able to remount and continue the race, Foinavon had built a 30-length lead. The 23rd fence is now known as the “Foinavon fence.” 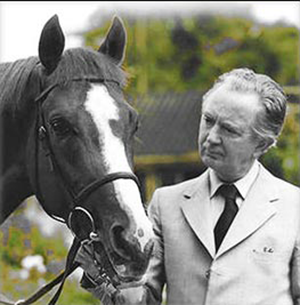 Fred Rimell and George Dockeray share the record for training the most winners in Grand National history, each producing four. Dockeray’s champions came in the early years of the event (Lottery in 1839, Jerry in 1840, Gaylad in 1842, and Miss Mowbray in 1852), while Rimell’s winning horses came more than a century later (ESB in 1956, Nicolaus Silver in 1961, Gay Trip in 1970, and Rag Trade in 1976).

Ginger McCain also won four Grand Nationals as a trainer, but three of those wins were due to Red Rum (1973-74 and 1977). Interestingly, McCain trained another winner nearly 30 years later (Amberleigh House in 2004), and his son Donald produced 2011 champion Ballabriggs.

Vincent O’Brien is the only trainer to win championships in three consecutive years, doing so with three different horses (Early Mist in 1953, Royal Tan in 1954, and Quare Times in 1955). Three women have trained winners of the Grand National: two-time winner Jenny Pitman (1983 and 1995), Venetia Williams (2009), and Sue Smith (2013).

George Stevens holds the record for most Grand National wins by a jockey, claiming five victories during the 1850s, 1860s, and 1870s. His last two victories came aboard The Colonel, who became the first back-to-back Grand National champion when he won in 1869 and 1870. Sadly, Stevens’ career was cut short at the age of 38 years old when he was thrown off a horse while riding home in 1871, suffered a skull fracture, and died the next day.

Two other jockeys have won three Grand National titles. Brian Fletcher rode Red Alligator to victory in 1968, then guided the legendary Red Rum to consecutive wins in 1973-74. Jack Anthony won his three titles from 1911-1920 and may have won more that decade if not for the cancellation of three races due to World War I.

The only other multi-time winning jockey in Grand National history is Ruby Walsh, who claimed titles in 2000 and 2005. Walsh is still an active competitor in the event, though he was forced to miss the 2018 Grand National after breaking his leg falling off a horse.

History of the Grand National 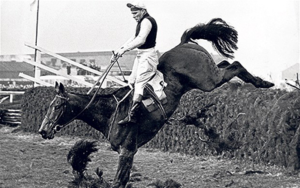 The origins of the Grand National date back nearly 200 years ago, when Waterloo Hotel proprietor and betting syndicate head William Lynn leased land in Aintree, Liverpool, to build a racecourse and grandstand. The first foundation stone was laid in 1829, and the inaugural Aintree Grand National steeplechase was held in 1839 (although some historians believe Grand National races were held there beginning in 1836). Lottery was the first winner of the Grand National at Aintree, which is also infamous for Captain Martin Becher’s fall off his mount and into a brook.

The timing of the first Grand National couldn’t have been better. The Great St Albans Chase steeplechase was discontinued in 1838, opening a spot in the chasing calendar for the Grand National and suddenly making it a marquee event. A railway stop also opened in Liverpool around that time, making it easier for people to attend the competition.

When Lynn fell ill in the 1840s, fellow syndicate member Edward Topham took charge of the event. He changed the format of the race from weight-for-age (when the amount of weight a horse carries in a race is based on its age) to a handicap system (weight based on ranking and ability). That handicap system is still used today.

Aintree has seen many memorable incidents over its history. Here are some of the highlights (or lowlights, depending on your point of view):

Numerous injuries and even fatalities suffered by horses who participated in the Grand National over the years led to a safety review by the British Horseracing Authority in 2011. Fences were modified, and the minimum age for participating horses was raised to the current threshold of seven years old. Jockeys also faced stricter criteria in order to participate, requiring 10 previous victories in steeplechase events to compete in the Grand National.

Experienced horses tend to fare the best at Aintree. Nearly half of the winners in Grand National history have been between 9-11 years of age, and the average age of victorious horses since 1990 is 9.9 years. Meanwhile, no horse seven years of age or younger has prevailed since 1940.

We’re not sure that anyone could get rich betting on the Grand National, but we’re certain that you’ll have a lot of fun trying.

The unpredictable nature of the demanding steeplechase and the handicapping system makes every horse a contender, regardless of their pre-race odds. Catastrophe has reigned supreme over the years at Aintree, and no lead is ever safe, even if the leading horse is owned by the Queen herself.

In the spirit of Jolly Olde England, you owe it to yourself to join one of the top betting sites in time for the Grand National, turn on the telly, and give it a go! Win or lose, it’ll be a betting experience that you’ve never had before, and one you’re not likely to ever forget.