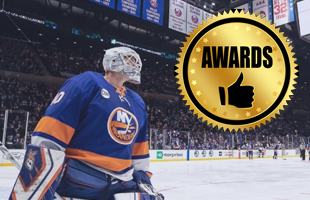 With the Stanley Cup Finals nearing an end, we’re now approaching the 2018-19 NHL Awards presented by Bridgestone, where the ceremony will be held on June 19 in Las Vegas, Nevada at Mandalay Bay. And since it’s almost time to give out the hardware, you (the bettor) will be happy to know that the odds for who will win each award are now out as well — get your wallets ready!

The odds are courtesy of the best hockey betting sites, but take these bets with caution: Most are listed with a favorite who is not just the top-dog, but is by a heavy margin. But hey, if you get your bet right on an underdog, you know it’ll be massively profitable.

By definition, the first award is given to the recipient who is “selected as the most proficient in his first year of competition in the NHL” — which is basically the NHL’s Rookie of the Year. This honor is known as the Calder Memorial Trophy. The current favorite to win is Elias Pettersson of the Vancouver Canucks, and it’s by a landslide too, and why not? His distant -7500 odds are due to landing 66 points in his first 71 games. This will definitely be one of the easiest choices out of all of the awards.

The next biggest blow away when you look at the odds is Robin Lehner’s grip over the Bill Masterton Memorial Trophy. The New York Islanders’ goaltender will most likely be given the award that is rewarded to “the NHL player who best exemplifies the qualities of perseverance, sportsmanship, and dedication to hockey.”

When you look at Lehner’s NHL past, it shouldn’t come as a surprise. He would have a fantastic first season with the Islanders, and this would come after his issues with mental illness during his tenure with the Buffalo Sabres. After an incredible story that could be made into a movie, it’s no shocker to see Lehner as a heavy favorite with his -3333 odds to take home the Masterton.

On the Other End of the Spectrum

The closest race is for the Jack Adams Award. The Jack Adams is given to the National Hockey League head coach “adjudged to have contributed the most to his team’s success.” Right now, the Tampa Bay Lightning’s Jon Cooper is the favorite to take home the trophy at -125, which is 185 points over second-place Barry Trotz’ (New York Islanders) +110 odds. After that, however, we immediately get to our first long shot. Craig Berube of the St. Louis Blues rounds out the top three in third at +1200.

Before you start betting on these awards, also take note that they’re voted on based off of the success from the regular season. The playoffs has no factor whatsoever in the voting. With that being said, I would take Tampa Bay’s Cooper and his -125 odds, the 62-16-4 regular season is just too flashy to pass up on.

You can catch the NHL Awards next Wednesday at 8:00 PM ET on NBCSN and Sportsnet.

As previously mentioned, Robin Lehner would have an incredible comeback story in the 2018-19 campaign. After confronting his mental health issues while with the Buffalo Sabres, Lehner would come back with a vengeance this season in his first year with the New York Islanders. For the campaign, Lehner would compile a stellar 25-13-5 record, while also putting up sexy numbers with a 2.13 GAA figure and in the net, his save percentage was .930%. After the adversity that he’s faced and his performance this season, I’m sure you now understand why Lehner is such a heavy favorite — and deservingly so.

Joe Thornton has had an impressive season with the San Jose Sharks, but the reason why he’s such a heavy second-place underdog is because he obviously doesn’t have the Hollywood story that Robin Lehner has. Still, again, he’s had a solid season. For the 2018-19 season, Thornton would tally 16 goals, and he would also add 35 assists on the stat sheet. Thornton would also compile 51 points that would contribute to the Sharks’ playoff success this year. And speaking of the postseason, I know it doesn’t affect the voting with this award, but he would deliver there as well putting up numbers of four goals, six assists, and 10 points.

Another one that would lead to postseason success is Nick Foligno and his regular season performance for the Columbus Blue Jackets, though it wouldn’t be as elite as Joe Thornton — hence the odds. However, in the goal department, Foligno would actually out-do Thornton in that category, though it would only be by one goal. Foligno tallied 17 goals for the season. He wouldn’t do as well in assists, only compiling 18 in that statistic which still made an effective effort. Foligno would also rack up 35 points. All of this regular season success from Foligno would contribute to Columbus’ first-round upset of the Tampa Bay Lightning.

ODDS TO WIN THE CALDER TROPHY

There’s a reason why Elias Pettersson is such a heavy favorite to win the Calder Memorial Trophy, and that’s because his rookie season is full of so much more swag than his opposition. Just check out the numbers for yourself: In 71 games played this year, Pettersson would tally a remarkable 28 goals in his rookie season, and he’d also tally 38 assists for the Canucks as well. When the smoke had cleared for the 2018-19 season, Pettersson would walk away with 66 points — remember, this happening in 71 games. Why on earth wouldn’t you pick Elias Pettersson as your Rookie of the Year? The numbers are incredibly telling.

I understand the dominance of Elias Pettersson, but I can’t help but to feel Jordan Binnington and his 2018-19 success isn’t getting a fair shake in the odds — Binnington has been pretty dominant himself defending the net for the St. Louis Blues. Throughout the whole season, he would only compile a total of six losses after tallying a record of 24-5-1. If that wasn’t great enough, he’d also put together an impressive figure in the GAA category at 1.89. And the saving percentage is fantastic as well, posting near 93% at .927%. Back to his record though: 24 wins in 32 games played, not bad. Not bad at all.

The number one overall pick in the 2018 NHL Draft has had a spectacular season on the offensive side, particularly for a defender. And that’s why he’s third with the odds-makers, but unlike Jordan Binnington, Rasmus Dahlin is right where he needs to be in the odds. Still, you have to give a lot of kudos for Dahlin and his performance in the 2018-19 campaign. In the goals department, he would nearly hit double digits but would fall just short with nine goals on his resume. In the assist department, he would do very well hitting over the 30 thresholds at 35. And in 82 games played this year, he would secure 44 points. Needless to say, it was a successful rookie season for Rasmus Dahlin.

ODDS TO WIN THE SELKE TROPHY

Ryan O’Reilly is one of the best defenders in the National Hockey League, and that’s why he’s placed as the favorite to win the Selke Trophy. But O’Reilly’s defense isn’t the only thing that has grabbed eyes attention, it has also been his potent offense. In 82 games this season, O’Reilly has posted up a tremendously effective 28 goals, and that number has also come with a flashy 49 assists. And here’s where it gets the best for O’Reilly: He would tally 77 points in those 82 games played. Just an overall elite player and I’d certainly say he deserves the Selke Trophy if he wins it — the odds are too close to call in this one just yet.

With the numbers that can be calculated, Patrice Bergeron has been absolutely incredible this season, and if the Selke Trophy was an offensive award, you’d have to argue that Bergeron should be the favorite. In the goals category, he cracked the 30 thresholds with four more goals than Ryan O’Reilly at 32 but falls just two short of O’Reilly with a 47 figure. However, he gets the upper edge in the statistic of points, tallying 79 in an impressive 65 games. Overall, Bergeron is the better offensive player here. But like I said, this isn’t an offensive award, and that’s too bad for Bergeron. Still, a remarkable season from the 33-year-old.

Exceptional on defense, Mark Stone has also done his thing on the offensive side of things with a level of potency that has to be admired. Like Patrice Bergeron, Stone would also hit the 30 thresholds with 33 goals scored, and would also add to the potency with a total of 40 assists. In the points category, he would also hit over the 70-mark with a total of 73. As far as how many games he would do this in, it wouldn’t be an incredible stretch like Bergeron, but it would still be a solid performance with him putting up those numbers in 77 games. A stellar season for Mark Stone.

ODDS TO WIN THE HART TROPHY

With us arriving at the NHL’s version of the ‘Most Valuable Player’, you can expect the elite numbers to come out in this award category — Nikita Kucherov of the Tampa Bay Lightning gets us started right off of the bat with power numbers. The amount of potency is incredible in Kucherov’s offensive game, he’s tallied over the 40-mark in goals calculating 41. While in the assist market, he would more than double that with an incredible total of 87 assists. In 82 games played this season, Kucherov would manage to rake in a whopping 128 points. If this isn’t an MVP season, then I don’t know what is. And that’s exactly why he’s a very distant favorite in the odds.

Per usual, Sidney Crosby came with the numbers throughout the 2018-19 campaign, but it isn’t quite enough to get the Hart Trophy over Nikita Kucherov — hence the massive difference in the odds. Still, a dominant season for Crosby. In the goal department, he would hit over the 30-mark with a total of 35 goals, and he would nearly double that in the assist category with a total of 65 assists. In 79 games played, Crosby would be able to rake up 100 points to lead his Pittsburgh Penguins back to the playoffs. Another impressive season for the former No. 1 overall draft pick.

Not only am I surprised that Connor McDavid is as far as he is behind Sidney Crosby in the odds, but I’m also shocked that McDavid isn’t over Sidney Crosby in the odds. When you look at the numbers, McDavid has the overall better season, and it doesn’t take you too long to figure that out. Just look at the numbers yourself: In offensive potency, McDavid would crack the 40-mark in goals scored with a total of 41 to his name, and he would add to that flashy number with another in the assist category — he would rack up 71 assists. Altogether, his 2018-19 season saw him 16 ticks over the 100 mark in points with a calculation of 116. An impressive season for McDavid and he should honestly get more respect from Las Vegas in this one. I’d take advantage of those +1500 odds, however, with all of this being said. The numbers are similar to Nikita Kucherov’s, and if he does pull off the win, the payday would be epic. Bet on McDavid as a long shot — just in case.

ODDS TO WIN THE VEZINA TROPHY