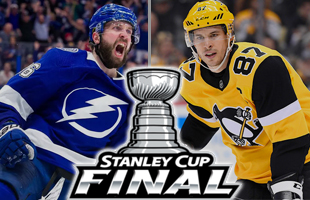 Amazing that it has been only a week since the St. Louis Blues have won the 2018-19 NHL Stanley Cup championship, but that hasn’t stopped Las Vegas and other odds-makers from already dropping the first set of odds for next year’s Stanley Cup victor.

According to the hockey betting sites, the very first (and way too early) favorite for next year’s title are the Tampa Bay Lightning sitting at +800 odds. Following Tampa Bay comes both the Boston Bruins and Vegas Golden Knights tied for second at +900. Coming up in fourth are the Toronto Maple Leafs at +1000, and then the Colorado Avalanche and St. Louis Blues round out the top five with a fifth-place finish at +1200. In the seventh position, we have a three-way tie at +1600 between the San Jose Sharks, Washington Capitals and Winnipeg Jets. Rounding out the top 10 in tenth comes the Calgary Flames and their +1800 odds.

What makes the National Hockey League so fun to bet on is the unpredictability of the league, St. Louis winning the championship proved that with flying colors, so did the Tampa Bay Lightning’s upset defeat to the Columbus Blue Jackets in the first round of the playoffs. It’s definitely the toughest to predict out of the North American big four (NFL, NBA, MLB, NHL). When we had arrived to early January, the St. Louis Blues were statistically the worst team in the league. After an incredible run after the hiring of head coach Craig Berube and rookie goaltender Jordan Binnington coming out of nowhere, the Blues would then go on to win the championship, something that nobody saw coming.

This season was the second straight where we would see an organization win a Stanley Cup for their first time in history. The Washington Capitals did it last year over the Vegas Golden Knights, and now we have the St. Louis Blues this season with their victory over the Boston Bruins. Now that the 2018-19 campaign is over, we head into the NHL Draft held from June 21-22, and then we gear up for free agency which begins on July 1.

In this year’s market, there’s a ton of unrestricted free agents to choose from, and talented ones at that. With that being said, take these current odds for what they are, because they’ll be extraordinarily different when the 2019-20 regular season begins with the massive landscape change that we’re going to see in the offseason.

Still, isn’t it fun to ponder next season’s champion a week after this season is over?

The Tampa Bay Lightning would finish with the best regular season record, would win the Presidents’ Trophy, would take home the Atlantic Division Championship, but would somehow get swept by the Columbus Blue Jackets in the first round of the Eastern Conference Playoffs. And that’s exactly why I agree with the odds-makers about the Lightning being the favorites to win next year’s Stanley Cup. After an embarrassing disaster in the 2018-19 NHL Playoffs, you can expect the Lightning to be out in full force next season and to be on a mission of determination.

With a chip on their shoulder, the Lightning will again come in loaded with talent for their campaign as well. On the offensive side, Steven Stamkos would lead the way for the Lightning with 45 goals, while Nikita Kucherov would take both categories of assists (87) and points (128). Andrei Vasilevskiy did his thing in the net, posting up a figure of a .925 save percentage and also tallying 39 wins. As a team, the Lightning would lead the National Hockey League in three of the four mainline statistical categories: They would take the No. 1 spot in goals for/game (3.89), power play percentage (28.2) and penalty kill percentage (85.0) — Tampa Bay would also land themselves in the top 10 on the defensive side of the puck, tying for 7th in goals against/game with 2.70.

Consider these past playoffs to be a fluke, I don’t see that happening to the Tampa Bay Lightning again. You have to make them the favorite to win next season’s Stanley Cup, and if they don’t, they won’t get dropped until at least the Eastern Conference Finals.

After taking a 49-24-9 regular season record that saw them finish second in the Eastern Conference, the Boston Bruins only saw the first seed Tampa Bay Lightning as their only threat to get to the Stanley Cup Finals. When the Lightning fell in the first round, the Bruins took full advantage and coasted their way to a Finals appearance. They may have lost in those Finals, but they would lose in seven games to a team who made a miracle one. With that being said, it was a super successful season for the Boston Bruins, and that’s why you have to make them the second favorite to take home next year’s Cup.

David Pastrnak would lead the way for the Bruins in goals this past season, tallying 38 for the year. Brand Marchand would lead Boston in both assists (64) and points (100). On the defensive side, Jaroslav Halak and Tuukka Rask would share the success, with Halak putting up a .922 save percentage and Rask having 27 wins on the year. As a team, they would hold average positions in the rankings in both goals for/game (3.13 for 11th in NHL) and penalty kill percentage (79.9 for 16th in NHL) but would be elite on the defensive side and in the power play game. In goals against/game, they would be tied for third with 2.59, and they would be the sole owners of No. 3 with 25.9% in power-play percentage.

The Boston Bruins face a similar test in the 2019-20 campaign as they did this season. Their only threat of them getting back to the Stanley Cup Finals will either be a major setback that results in an upset, or the top-seeded Tampa Bay Lightning — because they’ll surely be No. 1 again. If the Bruins can avoid a disaster, they’ll make another deep run in the postseason, but when they eventually meet up with a Tampa Bay team with a chip on its shoulder, I don’t see that going well for Boston. And that’s why they’re listed as the second favorite in the odds behind the Lightning.

After a pretty successful winning campaign in the 2018-19 regular season, the Vegas Golden Knights would nearly look to make another deep run in the playoffs — this after nearly winning the Stanley Cup last season. In the first round of the Western Conference Playoffs, the Knights would hold a 3-1 lead over the San Jose Sharks, but they would ultimately fall in seven games for a collapse. With that in their mind and a roster full of talent, you have to place the Vegas Golden Knights as the third favorite to win the 2019-20 Stanley Cup.

All three mainline individual statistical categories (goals, assists, points) is led by Jonathan Marchessault, with him the leading the Knights with 25 goals, 34 assists, and 59 points. In the net, it would be Marc-Andre Fleury leading the way for Vegas, tallying a .913 save percentage and also calculating 35 wins. If the Golden Knights hope to reach the Stanley Cup Finals again, however, they’ll have to increase their overall team numbers — it’s nothing but average at the moment. In goals for/game, they would be tied for 13th with 3.00, while on the defensive side, they fall solely in 10th with 2.78. In power play percentage, they come in at a dismal 25th with a figure of 16.7% and then placed 14th in penalty kill percentage at 80.8%.

The Vegas Golden Knights certainly have the talent to make another deep run in the NHL postseason, one that could see them back in the Stanley Cup Finals — especially with the current state of the Western Conference. If they hope to win the Cup, however, they’re going to have to increase productivity like I’ve previously mentioned. If that happens, the Vegas Golden Knights really could be golden.

The Toronto Maple Leafs just can’t get over the hump. For the second straight season, the Maple Leafs lost in the first round of the Eastern Conference Playoffs to the Boston Bruins. Toronto would put up a fight, however, but ultimately fall in seven games to the Bruins. If it wasn’t for Boston, the Maple Leafs may have been able to take advantage of the Tampa Bay Lightning’s first-round defeat and found themselves in the Stanley Cup Finals — ‘coulda, woulda, shoulda’ though.

For the Maple Leafs, it’s John Tavares who leads the way in scoring with a total of 47 goals. Mitch Marner leads in both assists (68) and points (94). In the net, it’s Frederik Andersen taking care of business with his .917 save percentage and 36 win tally. Overall as a team, Toronto is a powerhouse offensively, but they have a lot of work to do on the defensive side of things — they’re the kind of team that the opposition can beat in a shootout with the right power. In goals for/game, they’re ranked fourth in the NHL with a figure of 3.49, and sit at eighth in the league with a 21.8% power play percentage. Their defense is actually below average, placing themselves 20th in the National Hockey League with 3.04 goals against/game. In penalty kill percentage, they drop to 18th with 79.9%.

Per usual, the Toronto Maple Leafs will be lingering among the favorites to take the Stanley Cup all offseason long, and also all throughout the 2019-20 campaign. Toronto certainly has the talent to make a deep postseason run, but I just can’t help but to worry about their chances of getting all the way to the Finals — especially after the last two seasons. They’ll need to prove to me that they can beat the Tampa Bay Lightning and Boston Bruins in the postseason, only then will I have faith in the Toronto Maple Leafs.

The 2018-19 campaign was a pretty monumental one for the Colorado Avalanche. After making it into the playoffs, the Avalanche would go on to secure their first playoff series victory in over 10 years — the last time they advanced past the first round was back in 2008. They would claim that victory in five games over the Calgary Flames, 4-1, but would eventually fall to the San Jose Sharks in the second round in seven games. It was a pretty successful season for the Colorado Avalanche, and they now have a chance to build off of that momentum being the fifth favorite in the odds to win next season’s Stanley Cup.

Nathan MacKinnon would put up the majority of the production for the Colorado Avalanche, leading the team in each goals (41), assists (58), and points (99). In goaltending, it would be Pavel Francouz and Semyon Varlamov who would split the numbers, with Francouz leading in save percentage (.943) and Varlamov in wins (20). Offensively, the Avalanche had some shine to them in the previous season, their struggles would mainly come on the defensive side. In goals for/game, they rank in the top 10 in 10th with a 3.15 tally, and also landed in the top 10 in power-play percentage with 22.0% — that ranked seventh. In goals against/game, it was an average tally at 2.98 that placed them 16th in the league, and in penalty kill percentage, they would be a dismal 25th at 78.7%.

This year’s version of the Colorado Avalanche has already proven that they can win a playoff series, and with some improvements in the offseason, they might be in a position to take advantage of a weak Western Conference. That’s exactly why they’re listed the fifth favorite in the odds. Needless to say, the Avalanche will have one of the most interesting offseasons out of all of the teams.