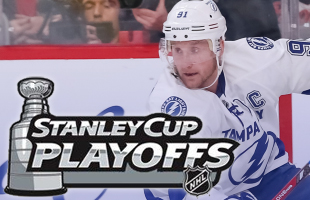 That’s how we got started in the 2019 NHL Playoffs, and it was absolutely bonkers.

First off, you had the major upset over the best team in the National Hockey League: The 62-16-4 Tampa Bay Lightning. They would take a first-round Game 1 loss to the wild card Columbus Blue Jackets in a 4-3 thriller. What’s amazing about that game is how the Lightning got off to a 3-0 lead in the first period, and it looked like they were on their way to a clean sweep over the Blue Jackets. However, Columbus would have different plans. They would strike with a goal themselves in the second period, and then would strike three more in the last period to give them a 4-3 victory. It was a hell of a game, and it’ll be interesting to see how long this momentum will continue for the Blue Jackets.

The 47-29-6 Nashville Predators are the second best team in the Western Conference, and though not as major as the upset of the Lightning, this was still a pretty big upset that the wild card Dallas Stars pulled off over Nashville. This was also in thriller fashion when Dallas would steal a 3-2 victory. The Predators would strike first to carry a 1-0 lead in the first period, while the Stars would get the second goal of the game to have the team tied up 1-1 heading into the third period. And that’s when shots would be fired for a crazy finish, where Dallas would ultimately achieve the upset hitting two goals to Nashville’s one for the 3-2 win.

It didn’t stop there either, the No. 3 St. Louis Blues and No. 2 Winnipeg Jets would go at it in yet another postseason thriller, and though not as severe as the previous two mentioned, the No. 3 seed Blues would take out the higher seed of the Jets.

Just a crazy start to the 2019 NHL Playoffs.

FAVORITES TO WIN THE 2019 STANLEY CUP

Coming in as the best team in the NHL at 62-16-4, it’s only fair (and right) to have the Tampa Bay Lightning as the top odds-favorite. The regular season Eastern Conference and Atlantic Division Champions might have taken a Game 1 upset, but Tampa is loaded here in the postseason. And in their defense, Columbus is going to have to win three more — easier said than done. As you see it already being done, the Lightning will have their 128 regular season points tested in the playoffs. Earning that many, this is a ‘Stanley Cup or Bust’ situation for Tampa Bay.

Leading at the helm for the Lightning is Steven Stamkos, Nikita Kucherov and Andrei Basilevskiy. Stamkos leads the team in goals with 45, while Kucherov leads in both assists and points with 87 and 128. Their goalie Andrei Vasilevskiy tallies in with a .925 save percentage and a total of 39 wins on the season.

In the statistical department

The Lightning have been lights out — ranking in 1st place in the NHL in three of the four mainline categories (goals-per-game, goals against-per-game, power play percentage and penalty kill percentage). In scoring, Tampa lays at the top of the league with an average of 3.89 goals-per-game. Their other 1st place mark comes in power play percentage and penalty kill percentage — 28.2 in Power Play %, and 85.0 in Penalty Kill %. They fall off a little bit on the defensive side, but it’s not horrible, they still rank tied for 7th in goals against-per-game to have themselves a Top 10 defense. Not too bad to go with the potency of their offense.

As you see, Tampa Bay is loaded with talent and the numbers are just absolutely dominant for them. They might have taken a Game 1 upset to the Columbus Blue Jackets, but let’s be honest here, TB will make waves in the postseason. I personally still have them winning the 2019 NHL Stanley Cup — Vegas agrees.

Behind the Tampa Bay Lightning comes the 50-25-7 Calgary Flames, the best team in the Western Conference with 107 points in the regular season. Their first opponent is the Colorado Avalanche, another team who made it as a wild card. My thoughts: Good luck, Colorado, and beware, Calgary. You saw what happened with the Tampa Bay Lightning and Nashville Predators. We could potentially have this series being thrown into the collection of upsets, only time will tell.

Calgary obviously has talent, but the majority of the “flame” power from the Flames is Johnny Gaudreau. He leads the team in each goals (36), assists (63) and points (99). Leading the way for Calgary at the goalie position is David Rittich, he’s compiled a total of 27 wins and has a save percentage of .911.

On the statistical side of things, Calgary is massively potent on offense, and they do a solid job on defense. But when you view the numbers in power play percentage and penalty kill percentage, they fall below the middle of the pack. In goals-per-game, the potency averages out to be 3.52 per game, and that places in a tie for 2nd place. When you glance over at defense, their 2.72 goals against-per-game ranks in the 9th position. And then we get to the sticky numbers: The Flames are tied 18th in the NHL in power play percentage at 19.3, and 21st in penalty kill percentage with 79.7.

The Calgary Flames may be the favorite to get out of the West, but it won’t be easy. They’ll be challenged massively by teams such as the Nashville Predators, Winnipeg Jets, San Jose Sharks, St. Louis Blues, among others. This isn’t dominant Tampa Bay we’re talking about, this is a 50-win hockey club with a magnitude of teams right on their tail in the regular season standings.

The Boston Bruins may not be as elite as the Tampa Bay Lightning in the Eastern Conference, but they’ve done a solid job this year calculating a 49-24-9 record with a total of 107 points. The Bruins are a No. 2 seed in the East and take on the No. 3 Toronto Maple Leafs. Needless to say, Boston has their work cut out for them, even as the third overall favorite with the odds.

David Pastrnak and Brad Marchand are the stars in Beantown. With Pastrnak, he leads the league in goals with a total of 38. As far as assists (and points) go, Marchand leads the NHL in both. He has 64 assists and 100 points. In goaltending, both Jaroslav Halak and Tuukka Rask step up to the plate. Rask leads the team in wins with 27, while Halak tallies .922 in save percentage.

In the numbers, Boston places in the Top 3 in two of the mainline statistical categories (goals against-per-game and power play percentage), but are a little lackluster in offensive potency and penalty kill percentage.

Starting with their first power statistic on the defensive side of things, they rank tied for 3rd in goals against-per-game with a figure of 2.59. With their other solid number, they also place 3rd in the rankings with a 25.9 in power play percentage. In goal production, they nearly place in the Top 10, but fall just short with an average of 3.13 to have them ranked 11th in goals-per-game. In penalty kill percentage, they’re smack dab in the middle of the pack landing in the 16th spot in the rankings.

Other than the obvious threat of the Tampa Bay Lightning, other roadblocks that could get in the way of (another) championship for the city of Boston comes in the form of the Washington Capitals, New York Islanders, Pittsburgh Penguins, Columbus Blue Jackets (if they get past the Lightning), Carolina Hurricanes, Montreal Canadiens, and the Toronto Maple Leafs — a team they play in the first round. It’ll be interesting to see how far the Bruins go.

Coming in as the Central Division Champions at 47-29-6, the Nashville Predators place themselves fourth in the odds to be the favorite to win the Stanley Cup championship. The Predators also eclipsed the 100 points mark by hitting exactly 100. But here’s the thing: Nashville is another one of those teams who took a big upset to a wild card team, there’s in the form of the Dallas Stars. Down 1-0 after the Game 1 loss, how will Nashville respond? They’re not a blatant powerhouse like the Tampa Bay Lightning after all.

Guiding the Nashville Predators is goal-leader Viktor Arvidsson, and Ryan Johansen does his thing in the categories of assists and points. In the goals category, Arvidsson would tally 34 in the regular season. Johansen would put up 50 assists and 64 points. Pekka Rinne does the damage for Nashville in the net, putting up figures of .918 in save percentage and tallying 30 wins.

What’s carried the Predators all year has been their defense, but they also do their thing in penalty kill percentage as well.

But here’s the thing: Nashville struggles quite a bit in offensive production, and they’re absolutely dismal in power-play percentage.

Let’s start with their dominant defense, they’ve averaged 2.59 goals against-per-game which has them tied for 3rd in the NHL. That could very well be what carries the Predators far in the playoffs, and what has them placed fourth in the odds. Their other power statistic is the 82.1 figure in penalty kill percentage, that ranks 6th in the NHL. But then things get kind-of bad, and then, well, bad. In offensive production, they rank 19th in the league with an average of 2.88 goals-per-game. And here’s where it gets worse: Their No. 31 ranking in power-play percentage with a horrendous 12.9.

Nashville may be the second best team in the Western Conference, but they’ll have their work cut out for them with teams like the Winnipeg Jets, St. Louis Blues, Dallas Stars, San Jose Sharks, Vegas Golden Knights and let’s not forget the favorite Calgary Flames in the way. They’ve already taken a Game 1 upset to the wild card Dallas Stars, so the concern is there of how truly far they can go — especially with the lack of offensive production.

The St. Louis Blues sit 5th in the Western Conference, and they also rank No. 5 in the odds. Sitting at 45-28-9 (99 points), the Blues are one of the sleeper teams to make a deep run into the postseason — and they’ve proven that already. Taking on the No. 2 seed Winnipeg Jets, 3rd-seeded St. Louis pulled the mild upset in Game 1 in a 2-1 thriller. Give them their respect, the St. Louis Blues have shown up to play.

Putting up the numbers for St. Louis is Vladimir Tarasenko and Ryan O’Reilly. Leading in the goal department for the Blues is Tarasenko, he’s tallied 33 goals up until this point. O’Reilly is ranked atop the St. Louis Blues in assists (49) and points (77). Jordan Binnington does his thing in goaltending with 24 wins and a .927 save percentage.

For the most part, St. Louis does well in the statistical department — they rank in the Top 10 in three out of four of the mainline categories, and place in the Top 5 in another. Their only fault is the average offense, it isn’t exactly turning heads.

What makes the Blues such a lethal sleeper, however, is their defense, it’s tied for 5th in the NHL with 2.68 goals-against-per-game average.

Next up is their Top 10 (9th) ranking that is from an 81.5 penalty kill percentage. Another Top 10 (10th) ranking is their 21.1 rate for their power play percentage. And then you have their middle-of-the-pack offense: They score 2.98 goals-per-game to have them ranked 15th in the NHL, right in the middle of the pack.

The Nashville Predators, Winnipeg Jets, Dallas Stars, Calgary Flames, San Jose Sharks, Vegas Golden Knights… The competition will be extraordinarily tough for a St. Louis to get through, needless to say. And I’ll straight up tell you, I’m not seeing it.

WHO TO RIDE WITH FOR THE HUGE PAYDAY