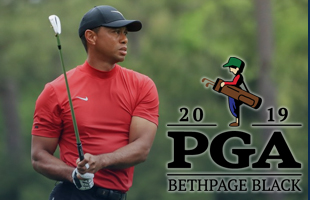 In a new spot in the PGA Tour’s circuit, the PGA Championship takes places at the Bethpage Black Golf Course located in Farmingdale, New York. The tournament takes place from May 16-19. As it stands right now just days away from the PGA Championship, Tiger Woods is currently one of the favorites to win at +1000 — if Woods wins, it would be his second consecutive major victory.

Before this year, the PGA Championship was played as the last major of the PGA schedule in August. Now it’s being played in May, the first time that the tournament has been held in this month since 1949. Also, keep in mind: It’s the 101st time that the event has been held, launched in 1916. Needless to say, there’s a lot of history in the PGA Championship.

Another thing monumental about 2019’s PGA Championship is that this is the first time that Bethpage Black is hosting the tournament.

But this course is no stranger to prestige: Both the 2002 and 2009 U.S. Opens were held at Bethpage Black, and it’s also carrying the Ryder Cup when 2024 comes around. What we’re looking at here is a 7,426-yard par 70 course, and it’s known to be only friendly to players with a high golf IQ — even one mistake can kill your game in this tournament. Hey, it’s not the PGA Championship for nothing.

Last year’s winner of the PGA Championship, Brooks Koepka, is riding high into this year’s tournament placing himself at +1000. But keep in mind, he won at Bellerive Golf Course, a completely different course than Bethpage Black. Tiger Woods finished in second place in last year’s PGA Championship. And nevermind the fact that he just won the Masters. That’s why he’s top-dog coming into the tournament. The Masters win was his first major victory since the U.S. Open in 2008.

I understand why Tiger Woods is the favorite coming into the 2019 PGA Championship, I mean after all, he’s Tiger Woods. And well, he won this year’s Masters as we know. But here’s the thing: The previous four tournaments in 2019 haven’t been elite performances, though there is a top 10 finish placed in there. That would be in the WGC-Mexico Championship with a 10th place tally. His next best finish would be in the top 15 at 15th in the Genesis Open. But then it drops off: 20th at the Farmers Insurance Open and 30th at The Players Championship.

Coming in as the defending champion of the PGA Championship, Koepka inconsistency in 2019 might be an issue. Beginning with the Arnold Palmer Invitational Pres. By Mastercard, Koepka wouldn’t even make the cut — just a horrible start. He would then follow that up by at least making the cut in The Players Championship, but would do dismal at 56th. However, he would follow that up with an elite 2nd place finish at The Masters and 4th at the AT&T Byron Nelson. He’d finish 22nd at the Zurich Classic though.

Other than his most recent performance in the RBC Heritage (28th), Dustin Johnson has been on point to begin the 2019 campaign. In his first tournament back in February in the WGC-Mexico Championship, he would start out of the gate with a victory. He’d then follow that up with an elite top 5 performance in 5th in the prestigious Players Championship. Following that, he would play in the Valspar Championship, where again he would have a solid performance coming in 6th — he would then nearly win the green jacket at The Masters finishing in 2nd.

McIlroy would disappoint bettors in the Masters Tournament (21st), but he would do his thing, for the most part, this season, including winning a certain prestigious tournament. Starting out in the WGC-Mexico Championship, he would nearly start out 2019 with a victory after securing a 2nd place finish. He would then follow that up with a solid 6th place tally at the Arnold Palmer Invitational, and then came glory: He would win the prestigious Players Championship, it being his 4th major all-time. He’d also do solid at the Wells Fargo Championship coming in 8th place.

Jon Rahm has had a great season, and an interesting one at that starting out pretty bad, and then constantly improving until victory hit. It’s been quite the campaign for Rahm, and as a result, this would be a superb long shot pick to make at +2000. After a dismal 45th place finish at the WGC-Mexico Championship, he would show massive improvement after finishing 12th in The Players Championship. After that, even more improvement with a 6th place finish in the Valspar Championship, and then 9th in the Masters. Then came the Zurich Classic: VICTORY.

Justin Rose has been another golfer that has people’s heads scratching with his inconsistency. He’s been elite, or really bad. It’s literally on opposite ends of the spectrum for Rose. To begin things in the Farmers Insurance Open, Rose would start the season sitting pretty with a victory. However, he would then follow that up with a 63rd place finish in the Arnold Palmer Invitational. Then Rose would get back to being great finishing 8th in The Players Championship. But then the Masters came: He would miss the cut altogether. Then at Wells Fargo, 3rd. Explain that.

Similar to Jon Rahm, Rickie Fowler has had nothing but a season of improvement, though he has no victories on his resume yet, meaning he may be overdue. With that being said, Fowler would be worthy of a long shot pick due to the circumstances. To begin the season, Fowler would have dismal days, finishing 47th in The Players Championship and then 40th in the Arnold Palmer Invitational. But things would get brighter from there: After taking the 17th place finish in the Valero Texas Open, he would finish 9th in the Masters and then 4th at Wells Fargo.

This would be another great long shot pick to make, and here’s why: Yes, Day only has one major championship under his belt, but that one was the 2015 PGA Championship. With that being said, he has a history of this tournament and the competition in it. But take it with caution: He’s been inconsistent this season. He started out things great finishing 8th in The Players Championship, but then would miss the cut at both the Valspar Championship and Zurich Classic. He would finish 5th at the Masters, but then 24th at Wells Fargo. Weird season.

The 36-year-old Italian is another one who has been inconsistent this season, though he does have a victory on his resume in a pretty prestigious tournament. To begin the season, he wouldn’t have the best (though not bad) performance in the WGC-Mexico Championship coming in 17th. In his next tournament, the Arnold Palmer Invitational, he would claim the victory. But then in The Players Championship, he would come in a dismal 56th place. However, recovery would come at the Masters in 5th. But back to inconsistency: Missing the cut at RBC Heritage.

Xander Schauffele would have an elite day in the Masters Tournament finishing in 2nd place, yes, but that’s about all the greatness that he showed us this year. Still, Schauffele might make another solid long shot pick due to that Masters finish and the prestige of the PGA Championship. He would miss the cut at The Players Championship, but would bring in solid finishes such as 14th at the WGC-Mexico Championship and 15th at the Genesis Open. But he also has another bad performance on his resume: 63rd at RBC Heritage. I’d pass personally.

We’ve arrived to our first thoroughbred long shot with Bryson DeChambeau now appearing on the list, and that’s because he’s had minimal success in 2019. In the WGC-Mexico Championship, he wouldn’t do well coming in the No. 56 spot. He would improve in the Arnold Palmer Invitational, but not much in 46th place. He would do okay in The Players Championship in 20th, but he would decline again at the Masters finishing in 29th place. In his most recent event at RBC Heritage, he would miss the cut altogether. Just not a good season.