Home > All > Did Billy Joe Saunders Fake His Injuries to Fight Gennady Golovkin? 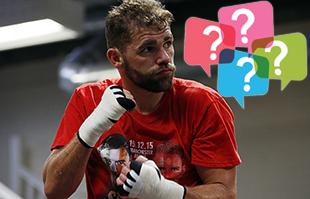 The world’s two best middleweights were supposed to fight in a rematch during the Cinco de Mayo weekend but that bout was postponed after Alvarez tested positive for a banned substance. When Alvarez was cleared, the world hoped that the rematch would be reset to September 15. But after Golovkin played hardball during the negotiations, the rematch nearly fell off the shelf.

Casualty Along The Way

But while the Canelo-GGG rematch is on, there was one other middleweight title fight that became a casualty along the way.

While Golovkin is the universally recognized middleweight champion in boxing, Triple G doesn’t have all the belts at 160 pounds. As champion, Golovkin holds the WBA, WBC and IBF belts. Well, take out the IBF from that sentence because the body recently stripped GGG of the belt for failing to fight mandatory challenger Sergiy Derevyanchenko. That is another story.

What we’re driving at here is that while Golovkin was known as the unified middleweight champion of the world, he was not undisputed. That’s because he did not have one of the major belts in boxing.

The WBO middleweight title is currently in the United Kingdom, in the trophy shelf of Billy Joe Saunders. The 28 year old Englishman won the belt after beating Andy Lee via majority decision on December 15, 2015. Since then, Saunders has proceeded to defend the belt three times, the last of which was on December 6, 2017 when he beat the highly touted David Lemieux by unanimous decision.

The undefeated Saunders was supposed to fight Martin Murray on June 23rd but withdrew from the bout on June 3, 2018 citing a hamstring injury. The two were originally slated to fight each other on April 14, 2018 at the O2 Arena in London. But Saunders pulled out of the bout on March 20, 2018 with a hand injury which he claimed happened while training. Because of the injury, the fight with Murray was moved to June 23rd because that was reportedly the only date available at the O2.

Two weeks earlier, Canelo Alvarez tested positive for the banned substance clenbuterol, putting his May 5 showdown with Golovkin in peril. Alvarez was later suspended for 6 months and pulled out of the fight while Golovkin ended up facing replacement opponent Vanes Martirosyan on Cinco de Mayo weekend. But one month before he annihilated Martirosyan in two rounds, Golovkin got an offer from Saunders’ promoter Frank Warren. Said Warren, via Daily Mail UK:

‘Golovkin has always said that he wants to get the last middleweight belt he doesn’t hold yet by fighting Billy Joe. This is the chance for both of them….’Although Billy Joe can’t recover in time for May 5 he could go as early as the first or second Saturday in June.
‘I am making a huge offer for Gennady to come to a football ground in London. Otherwise, we are just as happy to go to Las Vegas, where Golovkin is keen to headline for the first time in his career.’

Ok so why did Frank Warren talk about fighting Golovkin on April 4th when he had Murray set and ready for June 23rd? Canelo Alvarez failed a drug test during the first week of March. Two weeks later, Saunders pulled out of his Murray fight and announced that it would be rescheduled for June 23rd. However, Saunders’ team offered to fight Golovkin in the first week of April 2018. The dates don’t add up.

But that’s not it. We knew how hard it was to make the Canelo-Golovkin and how it almost didn’t happen. If it did not happen, then of course, Tom Loeffler had a back up plan for Gennady Golovkin. And guess who was his Plan B? B as in Billy Joe Saunders. After the Canelo-GGG fight was announced, Loeffler was interviewed by writer Dan Rafael and he said this, via ESPN:

Loeffler did the interview on June 14, 2018. Billy Joe Saunders announced on June 3rd that he had suffered a hamstring injury, hence he would not be available to fight Murray on June 23rd. When that fight was called off, there was no new fight date announced – just as what happened the first time around. Instead, Loeffler said that they had a deal in place to fight Saunders at the end of August. So between June 3rd and June 14th or a mere 11 days, Loeffler and Saunders were able to come up with a ready deal in case the Canelo bout wouldn’t materialize. Nice.

“It was definitely a fake injury. I knew that the first time he pulled out when we were supposed to be fighting April 14, then he did it again for June 23… He messaged me and said he wasn’t ready the first time, then there was a new date and he was supposed to be training in Fuerteventura, but he was never going to fight me.”

No Proof Of Fake Injuries

There is no proof that Billy Joe Saunders faked his injuries to avoid a fight with Martin Murray. But fake or not, it’s pretty clear that instead of fighting a high risk and low reward opponent like Martin Murray, Billy Joe Saunders would prefer fighting Gennady Golovkin for a bigger fight purse. Win or lose, that would be big money. That’s the business side of boxing and Martin Murray is just collateral damage here. But now that Golovkin and Alvarez are set to fight on September 15, Saunders will have to wait in the sidelines while he ‘recuperates’ from his hamstring injury.

Murray meanwhile, will face Mexican Roberto Garcia for the WBC silver middleweight title. If Murray beats Garcia and makes one successful defense of the title, he will become the mandatory challenger for the WBC middleweight title. This means that Murray will be in the line to face the GGG-Canelo winner. With his fate in his own hands, it does appear right now that it is Martin Murray who is in a better position to face the Canelo-GGG winner as compared to Billy Joe Saunders.

Now wouldn’t Murray getting that fight first be the best revenge for being stood up twice by Billy Joe Saunders?