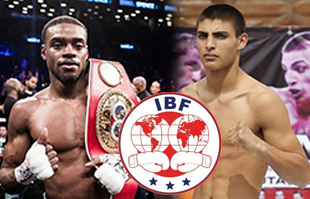 Showtime Championship boxing returns on June 16, 2018, with a double header featuring the homecoming of Errol ‘The Truth’ Spence who will be fighting for the first time as a world champion in his hometown.

The 28-year-old Spence, lives in nearby Desoto, Texas, and trains in Dallas but hasn’t fought in the area since his 5th round TKO victory over Alejandro Barrera at The Bomb Factory in Dallas last November 2015. Now a world champion, Spence makes a defense of the IBF welterweight title against mandatory challenger Carlos Ocampo at the Ford Center in Dallas. It will be the first boxing event to be held inside the Dallas Cowboys’ facility.

Let’s take a look at the odds, preview and our pick for this fight:

Errol Spence’s last fight in Dallas was an eliminator for the #2 spot in the IBF 147 pound rankings. After taking that win, Spence’s next fight was against former welterweight champion Chris Algieri. The Truth became the first fighter to stop Algieri and that victory led to a final eliminator against Leonard Bundu. Spence dispatched Bundu in 6 rounds to set up a title clash with Kell Brook in the latter’s hometown of Sheffield, England. Spence would go on to stop Brook in the 11th round to win his first world title.

In his first title defense, Spence made easy work of two weight division champion Lamont Peterson. Peterson had vacated his WBA ( regular ) welterweight title in order to challenge Spence. But Spence broke him down and beat him up before his corner threw in the towel in the 8th round.

Spence is considered one of the sport’s rising stars with a combination of boxing skill and explosive power. At 23-0 with 20 knockouts, the former Golden Glove winner is slowly beginning to assert himself as one of the top players in boxing’s most lucrative and talent-laden welterweight division.

Since capturing the IBF 147 pound title, Spence has made it known that he wants the big fights at welterweight. Those mean bouts against the likes of Danny Garcia, Shawn Porter, Keith Thurman and now Terence Crawford. But before Spence can take on the big names and try to unify the 147-pound belts, he must get past his mandatory challenger.

Like Errol Spence, Carlos Ocampo is undefeated. The 22-year-old Mexican has a professional record of 22-0 with 13 knockouts. Ocampo is considered as an excellent prospect in his native Mexico although he has yet to test his abilities against world-class competition.

Ocampo’s biggest win to date was his 2015 unanimous decision win over Jorge Paez Jr. He also owns a victory over former world title challenger Charlie Navarro. But other than the two, Ocampo is virtually untested in the pros and facing Spence will be a big step up in his level of opposition.

Promoted by Zanfer promotions, Carlos Cesar Ocampo won silver medals at the 2009 and 2011 Mexican National Olympiads as an amateur. Ocampo was installed as mandatory challenger to Spence after former world title holder Konstantin Ponomarev pulled out of a scheduled title eliminator.

Ocampo is actually the 3rd ranked fighter in the IBF’s welterweight rankings. But with no #1 and #2 challengers assigned after his fight with Ponomarev fell off the shelf, he was promoted to mandatory challenger status. Ocampo has fought exclusively in Mexico and will be making his first appearance on U.S. soil against Spence.

Spence is considered one of the scariest boxers in the planet with the other top welterweights supposedly trying to avoid him like a plague. Spence has been calling out the big names at 147 but despite his challenges, only Lamont Peterson was brave enough to answer his call. We know what happened to Peterson against Spence.

Overall, only three opponents have lasted the distance with Spence. The 28-year-old southpaw has produced stoppages in each of his last 10 bouts. But while he has the one-punch knockout power in his hands, Spence likes to break down his opponents with hard body shots before taking them out.

On The Constant Attack

But Spence doesn’t just rely on his power because he is skilled. The Truth is a very high IQ fighter who is equipped with excellent boxing technique. He moves well inside the ring and is constantly attacking with relentless body shots. He also has a proven chin which enables him to stand and trade in order to land his big blows.

Experience-wise, Spence has been seasoned with time. Since 2015, he has faced and knocked out four former world champions In his last two bouts, he dominated and stopped two welterweight champions, proving that he belongs to the elite in the 147-pound weight class.

Carlos Ocampo is an orthodox fighter with a wide stance. The young and rangy Mexican challenger works well behind his jab and has shown that he can mix his punching combinations really well. He isn’t the most accurate of punchers though and when it comes to fundamentals, he isn’t a sound as Errol Spence Jr. but he surely has the potential.

If you look at his body type, Ocampo needs to bulk up his frame a little bit if he wants to keep up with the big dogs of the division like Spence. Aside from working on his technique, he needs to add some pop to his punches. He is definitely still a work in progress but he is slowly getting there.

Like we said earlier, Ocampo hasn’t fought world-class competition yet and most of his opponents are unknowns. Spence is a huge step up for him but having a very thin resume doesn’t make him any less of a worthy challenger. In fact, being a relative unknown gives him some advantage over Errol Spence.

While Ocampo has easily scouted Spence in his most recent bouts, the same cannot be said otherwise because the challenger has not fought outside of Mexico. Props to Ocampo for having the guts to challenge one of the most avoided fighters in the sport of boxing. Errol Spence is one toughest assignments you’ll ever get as a prize fighter.

Spence is the heavy betting favorite here and rightfully so. He has risen in ranks and is now one of the Top 10 pound for pound fighters in the planet. And he may just be entering his athletic prime. That’s very scary. As for Ocampo, Spence is going to walk down this kid and put a hurting on him.