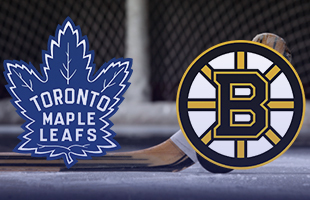 Here they are, back again, Toronto and Boston in the best first-round matchup of the NHL Playoffs.

In their march for a Stanley Cup, both teams will be faced with another top tier team. That’s despite both reaching 100 points, 107 in Boston’s case.

But while this rivalry has become a good one, it’s clear the Bruins come in as the hotter team. And they’re now finally healthy too. Toronto, meanwhile, seemingly puttered into the playoffs despite looking like a Stanley Cup Finals contender early on.

Even with their recent struggles though, they seem to still analytically stack up to this Boston team. And if they were to get some of their mojo back, they certainly have the forwards to put them over the top.

But they’ll have to deal with the best line in hockey, a veteran-laden team all over the ice, and the simple fact of having to play four games in a place where opponents rarely won this season.

So are the Maple Leafs still a sneaky bet to take despite recent struggles, or are the Bruins set to dominate this series? It’s time to size these two up.

For the last couple of years, they’ve had the best first line in hockey. The one in Colorado came on strong this year, but this is still the top dog, according to GSVA (game score value added).

Having three forwards with 4.0 GSVA’s or higher is great. Having them on the same line is tremendous.

David Pastrnak is so precise with his shooting and comes into the postseason having seven goals in his last nine contests. Brad Marchand, never afraid to get into the dirty areas and ruffle some feathers, had 29 points in the last 18 games he played.

And the leader of the forward group, centerman Patrice Bergeron, has points in eight of his last 10 games. So even for how good this trio has been, they’re arguably playing better than usual.

Behind them is a very strong second line as well, featuring David Krejci, Jake DeBrusk, and Marcus Johansson. Beyond that is where they could run into a few problems.

Their third line will hope to continue its growth with the addition of Charlie Coyle and the development of Dan Heinen. But they may be overmatched by Toronto’s group.

And the questions of depth only continue onto the fourth line. Veteran David Backes is going to have to stay healthy and he can get the younger guys on the line going.

This is likely a deeper unit of forwards than Boston. But despite the great top-end talent, it’ll be hard to compete with the Bergeron line.

If anyone can do it though, it might be the line headed up by John Tavares at center.

He came as advertised after the great free agency frenzy he set the hockey world into last summer. His 47 goals were only bested by Alex Ovechkin and his leadership was already invaluable.

Helping bring Mitch Marner’s skills to another level was also huge. The 21-year old winger has thrived with Tavares, compiling 94 points. Zach Hyman might not be the ideal third wheel on this line, but Toronto has talent spread out over the first three lines.

There’ll continue to be discussions this year whether or not Auston Matthews is “merely” very good or if he’s elite. If he’d played all 82 games this year, he would’ve come close to 90 points. His 3.9 GSVA is over Tavares’ 3.6.

But he also finished with a minus-9 on a 100-point team and was arguably the better all-around player last season. There’ll be a lot more to find out about him in the coming week(s).

The same goes for a guy like William Nylander, who after an impressive 2017-18 and subsequent holdout, wasn’t all that effective after signing a new contract. But the third line with him, Nazem Kadri, and veteran leader Patrick Marleau is still formidable.

Jake Muzzin should be back and ready to roll for Game 1 and that gives the Leafs a little more help defensively. They’re going to need all they can get.

That first line of Boston’s bowled over Toronto’s defense last season. In the seven-game series, they had 34 combined points against the Leafs.

But with the acquisition of Muzzin and Morgan Reilly blossoming into a top-10 defenseman, this group is better than it was last year. Whether it’s good enough against the top-six of the Bruins is another story.

After all, they still should take some of the blame for allowing four goals-per-game in their four matchups with Boston this season. The team was 1-3 in those games.

The Leafs could especially use a big series from Jake Gardiner. He won’t be the elite D-man people once thought he might be. But he needs to play like a top-pairing guy to give this defense a boost.

The Bruins have a truly elite D-man in Torey Krug, who comes in just behind Reilly (2.5 and 2.6 GSVA’s) in terms of value. But Boston may have a little more balance on their defensive unit as well.

Zdeno Chara isn’t the same player he was five or six years ago. But his play style mixes well with Charlie McAvoy’s and the latter defenseman can cover whatever extra ground he needs to.

Krug is paired with Brandon Carlo, who has had his moments but is more times than not a replacement-level D-man. Still, Boston’s second and third pairings are both ranked top-six league-wide in their respective pairings, according to Daily Faceoff.

Tuukka Rask has plenty of great postseason moments in the past. He’s been splitting time with Jaroslav Halak, who has given Boston plenty of experience in net and Rask ample rest over the course of the season.

Halak may get some looks in the postseason too after having a .922 save percentage and 2.34 GAA this season. Both numbers were better than Rask’s. But don’t expect Rask to be pulled after one bad game. It’ll likely be his series to win or lose, despite a somewhat down year (.912, 2.48 GAA).

Frederik Andersen will probably take a lot of the blame if the Leafs end up losing this series. But he really has had a decent season so far.

A 2.77 GAA is deceptive when he finished with a .917 save percentage that is pretty much on par with all his other seasons. And he was taking on more games than almost any starting goalie in the league.

He’s not elite and has had some issues in the playoffs. But he’s also come big in key situations and brings a level of stability that a few other teams (Looking at you, San Jose) in these playoffs probably wish they had in net.

Who Will Win and Why?

As of right now, MyBookie has Toronto as +120 to win the series and Boston favored at -140 odds.

Toronto is more equipped to take on the Bruins this year, from a defensive standpoint and on the top line. The improvements of guys like Marner and Reilly have been detrimental to their success, as have the Tavares and Muzzin acquisitions.

But they’ve been in a lull for a lot longer than any bettor should like. They’re 7-8-4 since the back-end of February and it’s been due to several different causes.

They also have guys like Kadri and Nylander, whose productions have waned significantly. They were relied upon heavily last season and it doesn’t seem they’re about to explode onto the scene again.

Boston isn’t as solid in net or with their defensive unit as they’ve been in past playoff runs. But that top line might be even better than it was last year. And Coyle may finally be turning a corner since coming over from Minnesota.

A little more depth scoring gets them closer to the Maple Leafs in that right, on top of having a less lopsided defense.

It’s a very close matchup again and it could very well go seven games. But with the Bruins being 12-2 in their last 14 home games, I’ll take them in that seventh game.