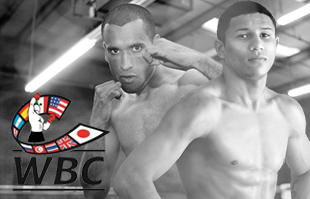 Berchelt is considered one of the best junior lightweights in the world, and he captured the title with a dramatic 11th-round TKO of the highly-toured Francisco Vargas last year. Berchelt then proceeded to decision mandatory challenger Takashi Miura in July of last year before knocking out Maxwell Awuku in three rounds during his most recent fight.

This is actually Berchelt’s second world title, as he won the interim WBO junior lightweight title in 2016 with a sixth-round knockout of British George Jupp. He successfully defended the belt once against Chonlatarn Piriyapinyo of Thailand before vacating the title in order to challenge Vargas last year.

While Berchelt is fighting at home, this will be Barros’ third straight bout outside his native Argentina. He won via split decision against Satoshi Hosono in Japan on October 3, 2016, before traveling all the way to England to get beaten via unanimous decision by IBF featherweight king Lee Selby.

Barros was the former WBA “regular” featherweight title, winning the vacant belt by Irving Berry in 2010. He lost the title in a rematch against Celestino Caballero the following year. Since then, he’s moved up to junior lightweight and in fact has challenged for the IBF belt in 2012, losing by decision to Juan Carlos Salgado.

The 26-year-old Berchelt is 5’7” and has a reach of 71 inches while fighting out of the orthodox stance. He is a vicious power puncher who has produced 29 knockouts in 33 career wins. Berchelt loves to swing for the fences and has knocked out 18 of his last 19 opponents.

Berchelt is dangerous when he gets his offensive game going because his combinations are very tough to overcome. He has plenty of potential to be a star and has slowly climbed the ranks as one of the best fighters in the lighter weight classes. He is currently ranked by Ring Magazine as its number-one junior lightweight. And if he continues with his winning ways, we’re going to see him in the pound-for-pound rankings soon.

Barros is a grizzled veteran who is known for his toughness. He is a hard puncher who isn’t afraid to stand and trade in the middle of the ring. He is as tough as they come and has a well-documented chin. Barros already has five losses but has only been stopped once in his career, by Mikey Garcia way back in 2012. Despite being up there in age, he still has excellent movement and can dodge punches exceptionally well.

The knock on the Argentine’s book is that he’s lost the biggest fights of his career. His most recent bout was probably the biggest of them all, yet despite losing to Lee Selby, he proved that he can compete in hostile territory and even gave Selby a good 12-round challenge.

Barros though isn’t just up against one of the best junior lightweights in the business. He is also fighting on hostile ground, as Berchelt will be defending his title in his adopted hometown. Barros has fought in Mexico only once before, and that was when he challenged for this same belt in 2012 against Salgado.

Berchelt, meanwhile, has fought most of his career in Mexico, his birthplace, and has lost there only once and by shocking first-round knockout to Luis Eduardo Flores in what currently stands as the only loss of his professional boxing career. His last 11 bouts in Merida have produced knockout victories.

Jonathan Victor Barros has certainly earned his stripes and is now a pushover of a challenger. He’s been there and done that. But if you take a look at his fight resume, good as it is, he’s failed to win the biggest fights of his career. Berchelt isn’t the best fighter he has faced, but the Mexican is one of the hardest punchers he will ever meet.

Barros is tough and tested, but he cannot match the young Mexican’s firepower. Berchelt’s combinations and punching power look like they are too much for Barros at this point in his career. If he withstands the punishment, Berchelt is just going to put up another boxing clinic. But chances are, Barros could end up getting knocked out for only the second time in his career.

Barros isn’t going down without a fight. But Miguel Berchelt should win this with another impressive stoppage. We’re picking Miguel Berchelt to beat Jonathan Victor Barros.