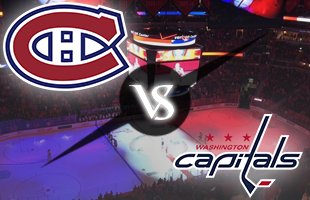 The most important game on Thursday’s NHL schedule takes place in the Nation’s Capital as the Washington Capitals play host to the Montreal Canadiens. This clash is extremely meaningful to both teams, mostly the Canadiens as they try to keep their playoff hopes alive. With two games to go for each team, Montreal is tied with Columbus for the second and final wild card spot in the East, one point behind Carolina for the first wild card. However, the Habs’ remaining schedule is the hardest of those three teams, and with a visit to Toronto on Saturday looming, they can’t afford not to get two points tonight. Washington’s motivated to get a result tonight as well, needing at least one point in order to clinch the Metropolitan Division title — although the Caps could also lock up first place with an Islanders loss in Florida. Although Washington has won five of the last seven meetings between these clubs, Montreal can take solace in the fact that it has prevailed in three of its last four trips to D.C.

A Look at the Stats

The books took their time opening a betting line on this game, When teams are in a must-win situation in order to keep their playoff hopes alive, that urgency is factored into the betting line. That’s certainly the case here, with the Canadiens paying a mere +110 on the moneyline — a far cry from the +130 or +140 that they’d probably be catching if this game were being played in January. The bottom line is that if the only reason you want to bet on Montreal here is because they “need to win”, you’re not outsmarting the bookies. They’ve already made an adjustment for that.

I actually think they may have gone a bit too far with this adjustment. The Capitals are still playing for something tonight as well. Even though Washington has two games left to get one point, the opportunity to clinch the Metro title and rest some starters Saturday against the Islanders should motivate the Caps to take care of business tonight.

It’s definitely not going to be easy for the Capitals to put away a desperate Montreal team that is 6-1-1 in its last eight games. However, the Canadiens have been weaker on the road all season. In fact, if it weren’t for road losses to the two teams they’re chasing (Carolina and Columbus) in the past two weeks, Montreal would be in a much better situation tonight. I’m going to back the defending Stanley Cup champions at this low price. My pick for this game is the Washington Capitals moneyline at -130 odds.