Home > All > More Than A Meme: KSI vs Logan Paul Early Odds, Preview and Prediction

More Than A Meme: KSI vs Logan Paul Early Odds, Preview and Prediction 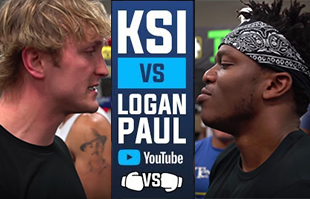 When Floyd Mayweather Jr. boxed MMA fighter Conor McGregor, last year, many of us wondered what is going on with boxing. In the aftermath of that bout, MMA fighters like Nate Diaz and Jose Aldo also applied for boxing licenses. Heck even UFC heavyweight champion Stipe Miocic talked about fighting Anthony Joshua.

But boxing got crazier when YouTube sensations KSI and Logan Paul announced that they would be fighting each other inside a boxing ring. It can be recalled that KSI made his boxing debut in January against another YouTube star. After his TKO victory, KSI called out Logan Paul. After weeks of exchanging trash talk, Logan Paul accepted the challenge. Now we have a fight. Or is it really a fight?

A lot of critics doubted Conor McGregor vs Floyd Mayweather Jr. But hey, it wasn’t just a commercial success, the fight got as real as it could get and McGregor took Mayweather to the championship rounds before running out of gas. Sure, Mayweather claimed that he carried McGregor to make the fight look good for the fans. But whether he did or not, the fight was interesting and McGregor was doing real damage early on. McGregor ended up getting knocked out but that’s not the point.

This isn’t about an MMA fighter against an all-time great boxer. These are two YouTube sensations who absolutely don’t have any boxing experience. So when you come to think of it, they’re fighting on even ground. Sure, you can say that KSI has the advantage because he already has a 1-0 boxing record but that’s nothing really because he fought a fellow YouTuber, just like Logan Paul. When you have two unknowns going at each other, you have a pick’em fight. That makes this an interesting boxing bout and one that you can make money out of.

Let’s look at the tale of the tape, or whatever info we have right now ( because these are not pro boxers with stats ):

KSI is Olajide William ‘JJ’ Olatunji in real life. Born on June 19, 1993 in London, England, KSI is a British YouTuber who has 18M subscribers in what is the 36th most subscribed channel in YouTube. He is also known for his music with his 2016 debut EP Keep it Up reaching #1 in the UK’s R&B Album Charts.

KSI has been doing YouTube videos since 2010 and recently ventured into boxing, making his debut last January. It was his post-victory interview that triggered this whole thing because KSI called out Logan Paul after his TKO win over Joe Weller.

After beginning as a Vine Star, Logan Paul moved to YouTube in 2013. He became controversial in 2017 when he uploaded a vlog of a dead man who had committed suicide in Japan. The controversial ‘Suicide Forest’ video drew plenty of backlash and criticism but it only made Logan Paul more popular than ever. Paul has two YouTube channels with a combined 20M subscribers.

There are actually two KSI vs Logan Paul bouts, as agreed by both parties. The first fight will be held on August 25, 2018 in the United Kingdom while the second bout will be booked in the United States for February 2019.

While the parties are still undecided on the venue for the 2019 bout, the August 25th bout will be held in KSI’s backyard – England. Last January, KSI made his boxing debut against another fellow YouTuber named Joe Weller. The fight was held at the 7,500 seater Copper Box in East London. But with a bigger crowd expected for his bout with Logan Paul, the August 25th venue is the Manchester Arena.

England’s Manchester Arena is considered as the second largest indoor arena in the European Union in terms of capacity and at a full house of 21,000, it should be the perfect venue for this white collar boxing bout. The parties initially felt that a neutral venue like Dubai should host the fight. But after deciding on a two-fight deal, each will have a chance to fight in front of his countrymen.

The financial terms of the bouts aren’t available yet but given these two combine for over 35 million followers on YouTube, the revenues from the bout including, gate receipts, merchandise sales, and sponsorship money could easily net both over a million U.S. dollars each.

There were some confusion and disagreement over the revenue split after Logan Paul lambasted KSI and his manager for announcing that it was 50/50 split. Again, there is nothing official yet on the purse share. However, given the fact that both are equally massive social stars, sources are confirming that the income from the bout will indeed be split evenly between the two of them.

On February 26, 2018, KSI’s brother Deji ‘ComedyShortsGamer’ Olatunji confirmed that he will also be fighting Logan Paul’s brother Jake Paul in a boxing match. Their bout was a result of a call out from Deji which Jake Paul happily accepted.

Initially, the brothers wanted to fight at a different place and a different date and weren’t interested to being an undercard of any other boxing bout. And why not? Deji commands around 9M YouTube followers while Jake Paul has about 13M followers himself.

However, the two finally agreed to fight on the same event as their more popular brothers. So as it stands right now, Deji vs Jake Paul will also happen on August 25, 2018, at the Manchester Arena as the co-main event of KSI vs Logan Paul in what is shaping up to be the ultimate family showdown in recent memory.

Interestingly, there were also rumors that Logan’s father Greg Paul was interested in fighting KSI but that gossip has died a natural death. Later, there were talks that Greg Paul was going to fight KSI’s dad Jide Olatunji. But that fight isn’t happening on August 25th. Or at least not yet. Given that there are still a couple of months before that date, who knows what this kind of people can come up with. So just stay tuned.

KSI is the favorite here at -200 while Logan Paul is the underdog at +150 as of June 14th. But I guess the only reason why KSI is favored here is because he already has one fight in his resume and he won that bout by TKO. But if you watched KSI vs Joe Weller, KSI was far from impressive. ( You can watch it here ) or even decent as a boxer. Okay, so as far as boxing training is concerned, KSI already has the advantage because he’s trained much longer. But that’s it.

Do not underestimate Logan Paul because of his choirboy looks. If you take a look at his bio, Logan was a linebacker at Westlake High School and qualified for the Ohio High School Athletic Association’s Division 1 Wrestling Individual Championships in 2013. Although wrestling is entirely different from boxing, it says something about the athleticism of Logan Paul. Not to mention that physically, he looks around a couple of inches taller, appears heftier and is more ripped than KSI.

Given that Logan has had enough time to train, I personally don’t think it will be hard for him to learn how to box, especially with a fighting background. But one thing is sure, the longer this fight goes, the more will it be in favor of Logan. You don’t get to wrestle in State championships without a good gas tank. Size-wise, Logan Paul also has the advantage so it might be a good idea to drop some dough of him, especially with the plus money.

We’re not expecting a super fight between two great boxers here. But it’s a fight between two beginners and two fighters who don’t have any boxing experience. In an even fight, you’ve got to consider the plus money. And knowing that the guy with the plus money is the better athlete between the two, you’ve got to go with him. We’re picking Logan Paul to beat KSI in a very entertaining boxing bout.