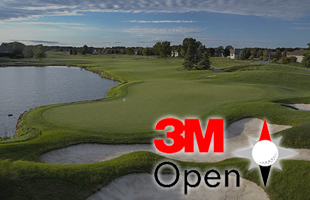 Like last weekend in Detroit at the Rocket Mortgage Classic, the PGA Tour will once again make history this weekend, and for July 4th weekend as well. It’s been nearly a half-century since the PGA Tour has made an appearance in the state of Minnesota, and the long wait is over for loyal golf fans in ‘The Gopher State’ as the 2019 3M Open will be held at TPC Twin Cities in Blaine, Minnesota — a suburb of Minneapolis. As it stands now in the odds, Brooks Koepka is currently the favorite to take the tournament.

The exact favorites’ figure for Koepka comes in at +700 on the golf betting sites, followed by Hideki Matsuyama in second place at +1000. In third, you have Jason Day at +1100, with Bryson Chambeau behind him in fourth at +1400. Patrick Reed rounds out the top five with his +2200 odds. Getting into the rest of the top ten, we have both Tony Finau and Viktor Hovand coming in at +2800, and we have another tie for eighth with both Joaquin Niemann and Rory Sabbatini at +3300. Charles Howell III ends things for the top 10 sitting at +4000.

Out of the top 30 players in the FedExCup standings, 11 golfers will be featured in the inaugural 3M Open. Despite this being an inaugural event, however, that doesn’t mean that Minnesota doesn’t have a rich history in golf. As a matter of fact, they do. In the past 17 years, they’ve hosted a Ryder Cup, two major champions, and also a PGA Tour Champions event. For the 3M Open, it’s the first regular stop on the PGA Tour since 1969’s Minnesota Golf Classic, the final installment of that tournament.

BROOKS KOEPKA ONLY SHOWS UP FOR THE BRIGHT LIGHTS

At Hazeltine in Chaska, Minnesota, all of Brooks Koepka, Phil Mickelson, Patrick Reed, Ryan Moore, and Jimmy Walker were in the 2016 Ryder Cup — Hazeltine is near TPC Twin Cities. Here’s the problem for Koepka, specifically in this event: Despite him winning the PGA Championship and placing second in the other two majors this season, Koepka has been dismal in his last two non-majors, finishing outside of the top 40 in each. He’s also struggled at other non-major events, though he would win the CJ Cup at Nine Bridges to his credit.

TPC Twin Cities’ course is a total of 7,468 yards and it’s a par 71. Opening in 2000, it’s debatably one of the top layouts on PGA’s Champions circuit. Featuring 27 bodies of water, the course was designed by the legendary Arnold Palmer. TPC Twin Cities either placed No. 1 or No. 2 in most birdies in a season out of all of the courses in each of the past seven years.

Let’s go over the full list of odds for the 2019 3M Open at TPC Twin Cities in Blaine, Minnesota. The event is held until July 7 and is being nationally televised on GOLF and CBS. The purse for this event is an amount of $6,400,000.

Brooks Koepka does extraordinarily well at major championships, but for some reason, he seems to struggle a bit at the lower-tier tournaments. Just check out his last four performances for example: At majors U.S. Open and PGA Championship, he would secure top two finishes in both — claiming a victory at the Championship and he finished second in the Open. But you get to the Travelers Championship and the RBC Canadian Open: He would finish below 50th in each, placing 57th in the Travelers and 50th in the RBC Canadian Open. To his credit though, he did have an elite fourth-place finish in the AT&T Byron Nelson — his most recent event before the previous four.

He hasn’t been great in his last five starts, but Hideki Matsuyama hasn’t been bad either — though he does have an elite placement finishing sixth in the Memorial Tournament pres. by Nationwide. He would also add a top 15 performance with a 13th place finish at the Rocket Mortgage Classic held in Detroit, Michigan. At the prestigious U.S. Open, he would fall below the top 20 with his name being No. 21 on the leaderboard. A month prior at the PGA Championship, another major, he would fall just short of another top 15 finish placing himself in 16th. At the AT&T Bryon Nelson, he would again finish below the top 20 with a 23rd place tally.

In Jason Day’s most recent five performances, he would give us a flash of greatness, three average finishes, and one tournament where he would miss the cut altogether. That flash of greatness would come in his most recent event of the Travelers Championship, taking an eighth-place finish at TPC River Highlands. In the U.S. Open major, Day would fall just below just the top 20-mark with a 21st tally, and the tourney before, that’s where he would miss the cut altogether at the Memorial Tournament pres. by Nationwide. In the PGA Championship and Wells Fargo Championship, the results would be very similar, nearly falling out of the top 25 in each — she would finish 23rd in the Championship and 24th at Wells Fargo.

A top-five tally in fifth place would be the result for Patrick Reed at last weekend’s Rocket Mortgage Classic at Detroit Golf Club, but before that appearance, Reed has gave us some dismal performances as of late. In the Travelers Championship, he would nearly fall outside of the top 30 with a 30th place finish, and a week prior, he would indeed fall out of top 30 — finishing 32nd in the prestigious U.S. Open. In the PGA Championship, Reed would then trip up and miss the cut altogether, and at the AT&T Byron Nelson, it would just be a horrible showing for Patrick Reed as he would fall all the way down to 63rd place on the leaderboard.

Tony Finau hasn’t provided a single thing in his last three tournaments — literally. He would miss the cut in each the Travelers Championship, U.S. Open, and the Memorial Tournament pres. by Nationwide. Before that, however, Finau would do his thing in the Charles Schwab Challenge, putting a second place finish beside his name. Prior to that, dark days would still be in effect for Finau, finishing a lousy 64th place in the PGA Championship. Reviewing even further, it doesn’t get much better for Finau: He would place 60th in the Wells Fargo Championship, and he would miss the cut altogether in the Zurich Classic Of New Orleans.

He would give us two top 15 finishes to ponder at in his last five performances, but for the most part, Viktor Hovland is another one who hasn’t exactly been elite this season. Last weekend at the Rocket Mortgage Classic, Hovland would crack the top 15 in that tournament with a 13th place finish, however, things were pretty bad a week before in the Travelers Championship with a 54th place tally. In the prestigious major of the U.S. Open, he would nearly crack the top 10, but would fall just short finishing in 12th. The rest of his season? Well, it wasn’t the best. 32nd in the Masters Tournament, 40th in the Arnold Palmer Invitational Pres. By Mastercard, and he would miss the cut in each the Farmers Insurance Open and Mayakoba Golf Classic.

Though Joaquin Niemann isn’t the greatest golfer we’ve ever seen, he is riding into the 3M Open with a lot of momentum after two straight top-five finishes. With that being said, Niemann and his +3300 odds are very profitable, and this may be a bet that you might want to make. In his last five performances, he would see a 31st place finish in the RBC Canadian Open, 27th in the Memorial Tournament pres. by Nationwide and 31st in the Charles Schwab Challenge. But check out his last two: Top five finishes (fifth in each) in both the Travelers Championship and Rocket Mortgage Classic. With not too many top names to take advantage of, Niemann and his top five momentum could come into this event and steal a victory. Solid pick right here.

Even better than Joaquin Niemann, you have Rory Sabbatini. The South African and Slovakian has secured three top 10 finishes in his last five tournaments, and also placed in the top five in two of those. Last week at the Rocket Mortgage Classic, Sabbatini would actually launch himself into the top three with a third-place finish, riding a wave of momentum into the 3M Open. He may have not done well in the U.S. Open with a 43rd place tally, and a 27th place finishes in the Memorial Tournament pres. by Nationwide, but he would do great in his previous two: Sabbatini would finish in sixth in the Charles Schwab Challenge, and he would take a top five fifth-place tally at the AT&T Byron Nelson. If I were you, I’d go ahead and place a bet on Rory Sabbatini. Momentum, quality finishes, and lack of competition could do wonders for Sabbatini.

Last weekend at the Travelers Championship, Keegan Bradley would nearly win the whole thing, placing himself in second to fall just short of the victory. Prior to that, however, Bradley has given us absolutely nothing. In his last five performances, he would miss the cut in two of them — the U.S. Open and the Memorial Tournament pres. by Nationwide. In the RBC Canadian Open, he would take a 44th place finish and would tally himself at No. 29 in the PGA Championship. I think you get the drill here: Stay away from Keegan Bradley and his +4000 odds.