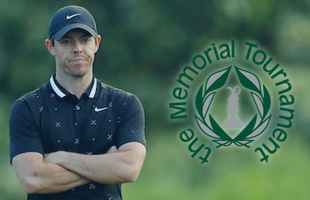 Welcome to “Jack’s Place” — that’s what the course is known as at Muirfield Village Golf Club located in Dublin, Ohio, the home of the 2019 Memorial Tournament. According to the best golf betting sites, the current favorite heading into the tournament is Rory McIlroy placed at +900.

After McIlroy comes Tiger Woods in second at +1100, then Justin Rose placed in third with +1600 odds — Patrick Cantlay is tied in third with +1600 as well. For the fifth position, we have another tie between Jordan Spieth and Justin Thomas at +1800. It’s the same way for the No. 7 spot in the odds: At +2000, it’s a tie between Matt Kuchar and Tony Finau. To round out the top 10, we have yet another tie between Hideki Matsuyama and Jason Day at +2200. In other words, we’re going to have a pretty competitive tournament.

If the odds weren’t telling enough of that, you’ll also see 29 of the top 30 players in the FedExCup standings that will be featured in the Memorial Tournament — including three of the top four with Kuchar, Day and Xander Schauffele. For Thomas, he’ll be returning back to action after suffering a wrist injury, he hasn’t played since the Masters. He would miss the PGA Championship.

After winning yet another green jacket in the Masters Tournament, Tiger Woods would come in as the favorite to win the PGA Championship. Well, things didn’t go so well, he would miss the cut altogether. But all is sunny in Dublin: He’s won this event a total of five times, but he’s struggled over the years. Last year, his top 25 (T-23) finish would be his best since winning this tournament in 2012. It’ll be interesting to see how Woods fares.

With a couple of other golfers, you have Phil Mickelson and Jason Day. Mickelson is a straight up veteran in this tournament, making his 18th Memorial appearance. For Day, he’ll be wanting to play top-notch due to Muirfield being his hometown course, but his best finish didn’t even crack the top 10 — he would finish T-15 two years ago.

Winning the Memorial Tournament in 2018, Bryson DeChambeau comes back this year to defend his title. After getting a birdie on the third playoff hole at No. 18, DeChambeau would grab the championship from Kyle Stanley and Byeong Hun An.

But take the defending champion with some caution in this year’s tournament: In the PGA Championship, he would do horrible, and how horrible do you ask? He would miss the cut altogether. Not good.

The Muirfield Village Golf Club in Dublin, Ohio has a course of 7,392 yards and it’s a par 72. As a hometown showcase for Jack Nicklaus, it was opened in 1972 and has become one of the top 20 golf courses in the United States of America. The 18-hole record belongs to John Huston at 61 set in 1996, while Tom Lehman holds the 72-hole record with a score of 268 that he would tally in 1996.

Rory McIlroy comes in as the favorite to take this year’s Memorial Tournament, and when you look at his 2019 campaign, you can understand why perfectly — it’s been fantastic. To begin the season in the Arnold Palmer Invitational Pres. By Mastercard, he would come right out of the gate with a top 10 placement finishing in sixth. In his next tournament in The Players Championship, he would tally himself in the first place to take the victory. After that, the Masters Tournament would be a little disappointing for McIlroy, but it wouldn’t be a bad finish with a 21st placement. McIlroy got back to business, however, in the Wells Fargo Championship placing himself back in the top 10 finishing 8th. He would repeat that feat in the PGA Championship, putting himself in the No. 8 position.

When you look at the numbers from Tiger Woods throughout his 2019 season, you see that the legend really hasn’t done that great of a job other than his victory in the Masters — all of his other tournaments would be double-figure placements. Beginning with the Genesis Open, Woods would manage a top 15 finish placing himself in 15th, and afterwards, he would crack the top 10 with a 10th place finish in the WGC-Mexico Championship. In The Players Championship, he would have a dismal day, finishing all the way in the middle of the pack in the No. 30 spot. In his most recent event, the PGA Championship, he would be an extreme disappointment as he entered as the favorite after winning the green jacket — he wouldn’t even make the tournament, missing the cut.

Justin Rose would start out the 2019 campaign great, and it would begin with a top 10 (eighth) finish in the prestigious Players Championship. Afterwards, Rose would be rocked with inconsistency. He would enter himself into the Masters Tournament and would come away with massive disappointment after missing the cut altogether. He would recover in fantastic fashion in the Wells Fargo Championship up next, tallying himself in the No. 3 position on the leaderboard — and then inconsistency struck again. In another tournament of prestige, the PGA Championship, he would have a lackluster day finishing in 29th, and then things would get even more terrible in the Charles Schwab Challenge where he would take a 58th place finish. A bit overrated at +1600 odds if you ask me.

The American has had a strange year, but it hasn’t been a bad one. He has three elite finishes on his resume, but he would also miss the cut at two other tournaments, including one of prestige. That prestigious event would be the first of his season, and it would be in The Players Championship. Like previously mentioned, he would miss the cut altogether. Up next in the Masters Tournament, Cantlay would recover well with a solid performance landing himself in the top 10 with a ninth-place finish. It would get even better in the RBC Heritage with a top three placement, he would finish in third place. The momentum would get shot when he arrived to the Zurich Classic of New Orleans, that’s the second event where he would miss the cut. In his most recent tournament, another of prestige in the PGA Championship, he would have another show of recovery with another elite performance in third. Weird year, but a great one.

Jordan Spieth is among the favorites because, well, he’s Jordan Spieth, but that’s not the only reason. After a dismal start to the 2019 season, Spieth has recovered well with two elite finishes in his two most recent tournaments. For Spieth, it would begin in the prestigious Masters Tournament, where he would limp out of the gate with a 21st place finish. Afterwards in the RBC Heritage, it would get even worse with a 54th place finish, and it would be slight improvement with a 29th place finish in the AT&T Byron Nelson. Spieth would then get his act together — he would shoot out to a third-place finish in the prestigious PGA Championship, and follow that up with a top 10 (eighth) finish in the Charles Schwab Challenge.

Justin Thomas would start out his campaign in great fashion, and it would all begin with an elite second place finish in the Genesis Open. Up next in the WGC-Mexico Championship, he would follow up that performance with a solid top 10 finish placing himself at No. 9 on the leaderboard, but then things would get a little rocky. Entering himself in The Honda Classic, Thomas would collapse all the way to the middle of the pack with a 30th place finish, and it would get worse in The Players Championship finishing in 35th. Recovery would come a bit in the Masters Tournament, however, putting himself in 12th for a top 15 finish. With that being said, recovery may continue for Thomas in the Memorial Tournament, and that’s why he’s among the favorites in the odds.

Things would get off to a bit of a rocky start for Matt Kuchar, he would tally himself in the No. 26 position in The Players Championship, his first tournament of the season. After that, Kuchar would get things rolling, and as a result, he would be a solid pick to take at +2000 odds. In the Valero Texas Open, he would close out in the top 10 with a seventh-place finish, and then would follow that up with a solid 12th place finish in the Masters Tournament. He would get back to elite status when he arrived at RBC Heritage with a second place finish, and then he would continue to improve with an eighth-place finish in the PGA Championship. As you see, Kuchar is entering the Memorial Tournament riding a wave of momentum.

Tony Finau has two great showings on his 2019 resume, but there’s just too much inconsistency there for my liking — stay away from Finau. He would start out things great with a fifth-place finish in the Masters Tournament, but it would fall apart from there. In the Zurich Classic of New Orleans, he would miss the cut altogether, and then would follow that performance up with a dismal day at the Wells Fargo Championship — he would finish in the 60th position. After that in the prestigious PGA Championship, it would be another lowly day as he would decline to the No. 64 position. In his most recent tournament at the Charles Schwab Challenge, he would come away with an elite performance, however, after finishing in second. I’d still stay away from him, but Finau would be an interesting dark horse to make at +2000 odds and entering the Memorial Tournament with momentum. Interesting bet, indeed, if you decide to make it. It’s much safer to ride with Kuchar’s +2000 though.

The 27-year-old Japanese Hideki Matsuyama only has one solid performance on his resume for the 2019 season, and after that, it’s nothing but ‘Average City’. I see nothing profitable about Matsuyama in this tournament. To kick things off, Matsuyama would be in The Players Championship, and that’s where his good performance would come — he would finish in eighth place. Things would then fall apart afterwards. In the Masters Tournament, he would finish below the top 30 placing himself in the No. 32 position and it wouldn’t get much better at the Wells Fargo Championship with a 31st place finish. At the AT&T Byron Nelson, it would be a similar story with a 23rd place finish. He would nearly crack the top 15 in his most recent event at the PGA Championship, but would fall just short in 16th place. Stay away from Matsuyama.

Like Hideki Matsuyama, Jason Day only has one good showing to brag about in the 2019 season, and that would be a fifth place finish in the prestigious Masters Tournament — if only that could have carried over to the rest of his tournaments. At the beginning of the campaign, Day would throw his hat in the ring for the Valspar Championship where he would miss the cut altogether. He would miss the cut again in the Zurich Classic of New Orleans. Afterwards in the Wells Fargo Championship, he would manage to make the cut, but would barely crack the top 25 with a 24th place finish. Things wouldn’t get much better in the PGA Championship either, he would finish 23rd, and that’s the wave he’ll be riding into the Memorial Tournament.