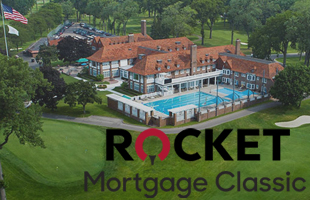 For the first time in the history of the PGA Tour, one of its tournaments will be held in the legendary city of Detroit, and I’m talking about the 2019 Rocket Mortgage Classic. It’ll also be the first event held in the state of Michigan since 2009 when the Buick Open took place.

If you’re not familiar with the sport of professional golf, the Rocket Mortgage Classic is actually a brand new event and 2019 is its debut. Not only is it cool that the PGA has an event at the Detroit Golf Club in this legendary city, but this is also going to give a much-needed economical boost to this blue-collar city as well. The Detroit Golf Club has never hosted a PGA event, so there will be plenty of reason to celebrate in Mo-Town.

One of the biggest things that the gambling community looks at when it comes to golf betting is how golfers have done at that particular course in previous seasons, you can usually expect similar results in a modern-day event. But remember what I just got done telling you, the Detroit Golf Club has never held a PGA event before, so that little factoid makes this bet so much more interesting and fun — sorry, ladies and gentlemen, no handicapping here.

So where do we go from here? Well, the only thing you can do, and what I usually go by most of the time: Their recent performances and stats.

Detroit Golf Club’s course will be a total of 7,340 yards and will be a par 72. Also included on the course are four different holes that are par-4, and they each measure under 400 yards. For their par-5 holes, three of them can be reached in just two tries for the golfer. Driving accuracy will be important in this tournament, however, and that’s due to a solid amount of trees covering the fairways — the rough will also be 3.5 inches.

If you need key statistics to focus on due to lack of knowledge coming into this event, take a gander at these three categories:

I know some out there like to look at more than just previous performances, especially with a brand new event like this with very limited information at our disposal. Those are definitely the three stats to have by your side as you place your wagers.

Now to the odds, golf betting sites currently has Dustin Johnson as a heavy favorite at +550, but those favorite odds are a risk to take with a T-20th place finish at the Canadian Open and finishing T-35th at the U.S. Open. There’s very limited value here, especially considering Johnson has been struggling massively in the putting game this season.

Up next on the list after Johnson comes U.S. Open champion Gary Woodland and Rickie Fowler in a +1200 tie, followed by Hideki Matsuyama at +1400. Rounding out the top five is the winner of last week’s Travelers Championship, Chez Reavie, coming in at a distant +2500.

What I mentioned earlier with Johnson though, there is some good news for him coming in with lackluster results, and that’s the lack of star-power that he will have to compete against — talent such as Tiger Woods, Rory McIlroy, Brooks Koepka and Jordan Spieth will not be featured in this tournament. At the same time though, this could be the perfect opportunity for a mid-tier player to steal a victory.

My advice: Look for someone who is very accurate to win this tournament. The more accurate, the better bet in my eyes.

One solid long shot to pick to win the tournament is Sunjae Im, who is seeking his first victory on the PGA Tour. Even though he lacks a win under his belt thus far, he ranks pretty solid in each of these five statistics: He’s 33rd in scrambling percentage, 38th in strokes gained tee-to-green, 55th in greens in regulations, 60th in driving accuracy, and 60th in strokes gained putting.

I don’t think I have to say it, you can see it for yourself, he’s a pretty good golfer in these categories. He may not be a top 20 golfer, but he doesn’t need to be in this tournament. Remember, a lot of the top names aren’t competing in the Rocket Mortgage Classic. Here are two more reasons why you should take advantage of his hefty +3500 odds as well: He finished seventh in the Canadian Open, and a solid T-21 in last weekend’s Travelers Championship.

Coming in with some solid momentum, nice rankings and a lack of elite talent to compete against, you can expect Im to have a good performance, and possibly win the entire tournament.

Another interesting potential bet to place is Brian Stuard, and that’s due to being the only golfer from Michigan in the tournament. He’s looked at as having home advantage, being able to play in front of family and friends. Despite having just one win on the PGA Tour at the 2016 Zurich Classic, Stuard is an interesting to pick to make at +15000.

Here’s another positive for Stuard coming into this tournament:

He has experience playing on this course, stemming from his college days at Oakland University. And also consider this: Even though you’ve never heard of him, his numbers are pretty good, with two of the statistics being elite rankings. Check the numbers out for yourself: Fifth in scrambling percentage, seventh in driving accuracy, 76th in strokes gained tee-to-green, 90th in strokes gained putting, and 148th in greens in regulation.

As you see, he places in the top 10 in both scrambling percentage (fifth) and driving accuracy (seventh). I do see his 148th ranking in greens in regulation a bit worrisome for a victory, as he may not get as many birdie putts as the rest of the field. But here’s the positive thing about that: Even though he isn’t hitting the greens on his first shot, he’s able to meet the par quite a bit.

The fact that Stuard is listed in the top 10 in two of the most important categories of statistical golf, and also that he’s from Michigan playing in a home setting, you have to take a chance on him with his very profitable +15000 odds. The chances of him sneaking up the leaderboard and stealing a win are pretty solid. A solid long shot, he can claim his second victory if his irons game is on point this weekend, and there’s a good chance that could happen. Go ahead and place a wager on Brian Stuard, I know I will.

With that being said, enjoy your stay in ‘The Mo’! Let’s go over the rest of the competition!

Before then, he’d also slap on his resume a fourth-place finish in the Sentry Tournament of Champions and a seventh-place tally in the Hero World Challenge. But there’s also a couple of more inconsistent placements: 30th in the WGC-HSBC CHAMPIONS and 45th in the AT&T Pebble Beach Pro-Am. Obviously, you have to put Dustin Johnson as the favorite with all of the elite numbers, but don’t put it past him to fall down the leaderboard and give the victory to a mid-tier golfer as a result.

And why do I say that? The reason that I mentioned earlier: Inconsistency. Dustin Johnson has concerned me all season with that. When he plays well, he plays elite to the point where he’s in a position to win the tournament, but when he’s having an off day, he really falls down the leaderboard. And that’s what concerns me for Johnson heading into this mid-level tournament. Still, you have to have Johnson as the favorite — the man is a monster on his good days.

Hideki Matsuyama only has a handful of elite finishes on his resume for the 2019 campaign, and the rest of them have just been average placements. But with the lack of talent in this tournament and Matsuyama being able to show up and put up good results, you have to have him second in the favorites.

In his last five tournaments, he would only do great in one of them, and that would be a sixth-place finish in the Memorial Tournament pres. by Nationwide. In the U.S. Open, he would post a 21st place tally, and in another prestigious tournament, finish 16th in the PGA Championship. In the AT&T Byron Nelson, he would finish below the top 20 again for a 23rd place finish, and then would take 31st at the Wells Fargo Championship.

Before that, he would take a 32nd place finish in the Masters Tournament, and a month prior, that’s where he would get one of his elite placements — eighth in THE PLAYERS Championship. In his previous tournaments, he would take No. 33 at the Arnold Palmer Invitational pres. by Mastercard and 19th in the WGC-Mexico Championship. His two other elite finishes would come in this stretch as well: Ninth in the Genesis Open and third in the Farmers Insurance Open.

Here’s the rest of Matsuyama’s results: 15th in the Waste Management Phoenix Open, 18th in the Hero World Challenge, 18th in THE CJ CUP @ NINE BRIDGES, 30th in WGC-HSBC CHAMPIONS, and 51st in the Sony Open in Hawaii. Yeah, I already know what you’re thinking: “I’ll just go ahead and ride with Dustin Johnson.” I don’t blame you, but Matsuyama’s chances to win are solid with the lack of fire-power in this tournament.

It’s perfectly understandable why Rickie Fowler is tied for the second favorite in the odds, and that’s because when you compare him to Hideki Matsuyama, you notice that their 2019 resumes are very similar — though Fowler has a couple of more top-notch finishes than Matsuyama does. And unlike Matsuyama, Fowler has a victory to bring to the table.

In his last five performances, his most recent being the U.S. Open, he would take a 43rd place finish in the U.S. Open. Before that, he would place himself in the top 15 tallying 14th in the Memorial Tournament pres. by Nationwide — he would miss the cut altogether in the Charles Schwab Challenge. In the prestigious PGA Championship, he would take a 36th place finish, and then place himself in the top five finishing fourth in the Wells Fargo Championship.

In the Masters Tournament, Fowler would do his thing with a top 10 placement of ninth, but before then it would be three average finishes: 17th in the Valero Texas Open, 47th in THE PLAYERS Championship, and 40th in the Arnold Palmer Invitational pres. by Mastercard. In The Honda Classic, Fowler would nearly grab a victory, but would fall just short with a second-place tally — he would take 36th in the WGC-Mexico Championship.

His only victory of the season would come in the Waste Management Phoenix Open, and he would also score two top-five finishes: Fourth in the Shriners Hospital for Children Open and fifth in the Hero World Challenge. His other placements would be 16th in the Mayakoba Golf Classic and 66th in the Farmers Insurance Open. I agree with the odds-makers that both Fowler and Matsuyama should be tied in the odds, but if I were you, I’d take Fowler out of the two for a winning pick. Neither are bad options though with the inconsistency of Dustin Johnson.

TO WIN THE 2019 ROCKET MORTGAGE CLASSIC