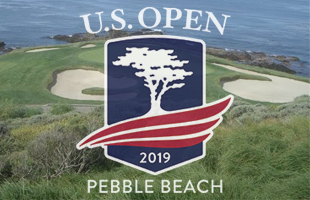 It’s one of the most prestigious golf courses in the world, and it’s returning as a host for the 2019 U.S. Open — Pebble Beach Golf Links in Pebble Beach, California. It will be carrying the second major of the year from June 13-16. As far as who the favorite is to take the cake and win the tournament? It’s a familiar golfer that we’ve gone over several times already this season, and I’m talking about Brooks Koepka.

According to the best golf betting sites Koepka tallies as the top-dog with a figure of +550, and that makes him a distant favorite as well with him being 250 points over second place Dustin Johnson — he’s listed at +800 odds. Coming in third place is Tiger Woods at +1000, it’ll be interesting to see how he comes into this major tournament after his top 10 finish (9th) in the Memorial Tournament pres. by Nationwide. Up next in fourth place comes Rory McIlroy at +1200, while Jordan Spieth completes the top five in fifth at +1400. In sixth place, we have Justin Rose sitting at +1600, and Justin Thomas and his +1800 odds have him in the No. 7 position. For the eighth slot, we have a tie between Jason Day and Rickie Fowler, each having +2000 with the oddsmakers. Rounding out the top 10 with odds of +2200, we have Francesco Molinari coming in the tenth spot.

As far as Koepka is concerned, there’s a reason why he’s a distant favorite, and that’s because he’ll be going for his third straight U.S. Open championship in 2019 — that’s right, he’s already a repeat winner with victories in 2018 and 2017. Needless to say, it wasn’t exactly a hard choice for Las Vegas and company. And that’s not the only reason why he’s the favorite: He’s been amazing this season, securing a win in the PGA Championship for a second time and he would nearly win the Masters Tournament with a second place finish. It’s a pretty easy decision here, folks.

And believe it or not, that’s not it. Koepka is incredible in major tournaments. In just six starts, he’s won four of them, a dominant figure that has him 250 points (+550) over Dustin Johnson (+800) for the oddsmakers’ favorite. And here’s another statistic for you: Out of 22 PGA Tour tournaments, Koepka has made 20 of them. When you look at the figure in a percentage, that means that he’s made the cut in 91% of them. If you’re not seeing why Koepka is the favorite after all of that has been laid out, well, you’re just being a blatant hater.

The U.S. Open was last held at Pebble Beach back in 2010, and then, it would be Graeme McDowell of Northern Ireland who would take the victory. He would be the first European to win the American event since the year 1970. Overall, Pebble Beach has hosted the U.S. Open a total of five times, with this season being the sixth.

Pebble Beach is a total of 7,040 yards and is a par-71 course. It’s an incredibly beautiful golf course, but not only is it known for its beauty, but it’s also known for its tough play — golfers will have their work cut out for them in this one. This is especially true with the 14th hole which is a par-5, and it’s known as one of the toughest holes all across the PGA Tour. And here’s another interesting tidbit about hole seven, a par-3: It’s one of the most photographed in the planet.

For the most part, you can say that Brooks Koepka has had an elite 2019 campaign, and he’s riding plenty of momentum entering Pebble Beach on the quest for a third straight U.S. Open championship. Koepka’s season would begin in The Players Championship, and it wouldn’t go so well for the 29-year-old out of Florida State University — he would take a dismal 56th place finish. However, up next in the Masters Tournament, Koepka would recover well and finish in a crazy elite position in second — nearly winning the green jacket. He would struggle a bit in the Zurich Classic of New Orleans, but it would end up not being that bad of a finish with him landing in the No. 22 position. Since then, Koepka has been on a roll though.

Early last month at the A&TT Byron Nelson, he would take a top-five finish placing his name beside the No. 4 figure, and then it would be victory. He would take first place in the PGA Championship, with that being his most recent. With that victory and already winning two straight U.S. Open tournaments, it’s easy to see why Brooks Koepka is the distant favorite to be the victor.

When you look at Dustin Johnson’s 2019 resume, you see nothing but great finishes, and in my opinion, he’s being treated unfairly by the oddsmakers as a result. If it were up to me, I’d bring Johnson a little bit closer in the odds, but I would still have Koepka as the favorite to win. For Johnson, his season would also begin in The Players Championship, and things would go great for Johnson with a top-five finish placing fifth. Up next in the Valspar Championship, he would follow his Players Championship performance up with another great showing, this time in the top 10 in the No. 6 position. In the prestigious Masters Tournament, Johnson would nearly take the green jacket but would fall just short with a second-place tally.

His only lackluster finish would come in the RBC Heritage, where he would finish 28th, however, recovery would come with a vengeance in the PGA Championship. He would take a second place finish. With almost nothing but top five and top 10 finishes on his record, Johnson is a legitimate option to win the 2019 U.S. Open.

2019 has been a bit of a magical season for Tiger Woods, showing flashes of greatness from his prime that we thought we would never see again from the 43-year-old. However, Tiger has certainly done his thing. Woods’ season would begin back in February in the WGC-Mexico Championship, There, he would take a top 10 finish in 10th to start out things on a solid note, but things wouldn’t go as well in his next tournament. In The Players Championship, Woods would fall all the way back on the leaderboard and end up finishing in the No. 30 position.

And then came the 2019 Masters Tournament. There, Tiger would claim the victory and would win his fifth green jacket that would lead him to being rewarded the Presidential Medal of Freedom from President Donald J. Trump. That win would set off shock waves in the golf world and would make him the heavy favorite to win the PGA Championship. However, things wouldn’t go so well for Woods in that tournament, and that’s an understatement — he would miss the cut altogether. In his most recent appearance, this being in the Memorial Tournament pres. by Nationwide, Tiger Woods would recover with a top 10 finish — he would place himself in the ninth position when the smoke had cleared.

In his most recent event, Rory McIlroy wouldn’t make the cut, and in another event, he would tally a 21st place finish. Other than that, however, it’s been nothing but elite placements for the Irish golfer. Beginning in March with The Players Championship, it would start out with glory right away for the 30-year-old with a victory in the tournament. Up next in the Masters Tournament, McIlroy would disappoint a bit, but it wouldn’t be that bad of a finish just falling under the top 20 in 21st.

The following month in the Wells Fargo Championship, McIlroy would get himself back in the top 10 after finishing eighth, and then would have another No. 8 placement in the PGA Championship. Things got rocky for McIlroy in his most recent appearance though, which would come in the Memorial Tournament pres. by Nationwide — he would miss the cut altogether.

Jordan Spieth’s 2019 campaign would get off to a rocky start, but it wouldn’t take him long to recover and get back in elite mode. Now heading into the 2019 U.S. Open, Spieth is riding a wave of momentum that could potentially deliver him a win. Spieth’s season wouldn’t begin until April in the RBC Heritage, and there, things would be pretty bad with a lackluster 54th place finish. Up next in the AT&T Byron Nelson, Spieth would achieve a good level of improvement putting himself in the No. 29 position. After that tournament, however, Spieth would then start to go on a roll.

In the PGA Championship, he would shoot up to third to achieve a top-three finish, and then would follow that up with a top 10 placement in the Charles Schwab Challenge — he would take an eighth-place finish. In his most recent tournament, the Memorial Tournament pres. by Nationwide, he would have the No. 7 tally beside his name. With the wave of top 10 finishes and overdue for a win, expect Spieth to be battling it out among the leaders when the tournament nears its close.

He may be lingering among the favorites, but if I were you, I’d stay away from Justin Rose and his +1600 odds. Out of five tournament appearances this season, Rose has only had one ‘elite’ performance to show for it — this may be due to not getting started until April. His first tournament would be the Masters, and it would be terrible where he would miss the cut altogether. It looked like recovery would come and come quickly after a third-place tally in the Wells Fargo Championship, however, that would be his only great showing so far in 2019. Up next in the PGA Championship, he would fall nearly below the top 30 after finishing in the 29th position, and then it would get even worse in the Charles Schwab Challenge — he would nearly collapse and fall below the top 60 with a 58th place finish.

Things would get a lot better in his most recent appearance of the Memorial Tournament pres. by Nationwide, but he would still fall below the top 10 with a 13th place finish. I’m sure I don’t have to tell you again, you already know the drill: Don’t place a wager anywhere near Justin Rose.

Here’s another Justin to stay away from — Justin Thomas would get off to a great start in the 2019 campaign, but it’s been nothing but a disaster since then. Beginning with the WGC-Mexico Championship in February, he would do solid with a top 10 finish after placing ninth when it was all said and done. That’s when things would get bad, however. Up next in The Honda Classic, he would nearly fall below the top 30 with a 30th place finish, and in The Players Championship, Thomas would fall below the top 30 finishing in 35th. Justin Thomas wouldn’t do so bad in the Masters Tournament finishing in 12th, but still, as you see, it still wasn’t in the top 10 to be flashy on his resume.

In his most recent performance in the Memorial Tournament pres. by Nationwide, it would get really bad for Thomas — as a matter of fact, it would be the worst performance of his season. He wouldn’t even play, missing the cut altogether. Thomas has literally zero momentum entering the U.S. Open, I wouldn’t come anywhere close to placing a bet with him if I were you.