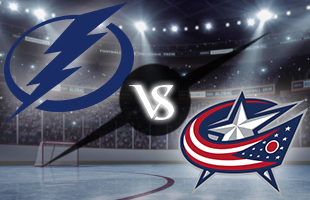 Out of all the first round series, the NHL Stanley Cup Playoffs have to offer, this seems like the most lopsided.

The Tampa Bay Lightning come in as 62-game winners, tied for the most regular-season victories in NHL history. But while the Columbus Blue Jackets seem no more than bugs on the Lightning’s windshield to most, they’re not your typical eighth-seed.

After a deadline trade that brought them forwards Matt Duchene and Ryan Dzingel, Columbus was all in for a playoff run.

This team is desperate, knowing this could very well be the last year star winger Artemi Panarin is in a Blue Jackets jersey. The same goes for the goalie and two-time Vezina Trophy winner Sergei Bobrovsky.

But they will run into a Tampa team that’s had plenty of heartbreak in recent playoff runs. One that has been a runaway locomotive for the rest of the league so far.

So do the Blue Jackets have a chance? And if it looks like they’ll succumb to the Bolts, is Tampa Bay worth the wager at -400 on BetOnline? Or should you stay away from the series entirely, maybe sticking to single games?

I’ll be answering those questions today. So first, here’s a look at how the forwards of these two squads measure up.

There’s a reason why all the analysts say Tampa Bay is extremely deep with forwards. They have the best scoring offense in the game by a longshot and three superstars leading it.

Nikita Kucherov won the scoring title and will likely win the Hart Trophy for MVP. His 128 points haven’t been achieved since Mario Lemieux in 1995-96. And he didn’t even lead his own team in goals.

That honor goes to captain Steven Stamkos, whose 45 goals were good for fourth in the league. And finishing what is a three-headed power play dragon is Brayden Point, who also has over 40 goals.

But it can be argued that the depth is just as impressive as a collective. Guys like Yanni Gourde and Tyler Johnson can turn into lightning bolts on skates at any moment with their speed. There’s also J.T. Miller and Alex Killorn providing physicality beyond the top-six.

And if there’s one specific x-factor on the Lightning side, it’s Anthony Cirelli.

He’s a 200-foot player, meaning the center is effective no matter where he is on the ice. He quietly neared the 20-goal mark this year and clutch goals are his forte. Cirelli had a better plus-minus (+25) than even Kucherov and is an instinctive skater who’s solid on the faceoff.

Atkinson is quite the lamp-lighter, as his 41 goals (29 even-strength) rank him among the league leaders. Even with only three goals in the last 14 games, he’s still one of the more dangerous wingers in the postseason. And the “Bread Man”, Panarin, is another.

Even though the Blue Jackets didn’t get past Washington last year, it had nothing to do with Panarin’s play. He contributed seven points in six games, adding to his already stellar postseason reputation (15 points in 17 games).

Another player they had going early in the Washington series last year was Pierre Luc-Dubois. His number of goals this year (27) were seven more than his age (20). At his 1.7 GSVA (Game Score Value Added), he’s a second-liner who’s easily a borderline top-3 contributor.

The Jackets will hope to give Tampa some wear and tear as well with big, physical forwards like Josh Anderson and Nick Foligno. The former found a new level this season in terms of his scoring touch.

If they could get one more stick hot, like Dzingel’s, and keep Oliver Bjorkstrand’s (Nine goals in last 10 games) on fire, they can make this competitive with that amount of depth.

Seth Jones and Zach Werenski are about as good as it gets on a top pairing. They’re ranked in the top-five in that category according to Daily Faceoff.

The good news is both these guys could be future Norris Trophy winners. Jones nearly compares to last year’s winner, Victor Hedman, who plays on the other team.

But while those two are the definition of a “shutdown pairing”, they leave some holes elsewhere. The other four defenders they’re likely to go with are average at best. The 14 minutes or so that Scott Harrington is on the ice leaves this team susceptible to the Lightning’s forward depth.

This is where guys like Cirelli come into play.

This isn’t a bad group. Maybe David Savard eating a few more minutes here and there will work. He’s been quite serviceable in his close to 20 minutes-a-game on-ice.

If this group stays healthy, they should be in great shape.

Hedman is as good as they get. He can come up in the zone with pinpoint shots and has a rare type of smooth speed for a guy his size (6’6”). He will likely be paired with Anton Stralman, who isn’t an ideal top-pair player anymore, but can be a stay-at-home type while Hedman freelances a little.

Behind them will be former all-star Ryan McDonagh, who was a Norris dark horse candidate for much of the season. His chemistry with the young Erik Cernak is flourishing and the latter D-man has proven himself with surprising agility, along with notable physicality and maturity at 21.

Mikhail Sergachev will probably rotate with a couple different defenders over this series. As long as he continues to be disciplined, his 1.5 GSVA is wonderful for a third-pairing.

Andrei Vasilevskiy is the type of goalie that sees a lot of shots. Usually, his defense is solid in front of him. But there are plenty of games he’s “stolen” for Tampa Bay over the years.

There are a few wacky goals that he can look foolish on. But there are three times as many highlight-reel saves with the flexibility he has and the push-off he gets from one side of the net to the other.

Two Vezina awards (top goalie) speak for themselves. Sergei Bobrovsky has the capabilities of pulling out all-world talent at any time.

He can also “steal” a series for his team. Though he had a rough start to the season with desire and play, he’s found his groove again. In an 11-game stretch last month, he allowed only 14 goals.

Though he’s given up six in the last pair, this is still a netminder who seems to be back in his zone. Especially on the mental side of the game.

Tampa has the best power play in the league, and at times, it hasn’t been close.

Take a few penalties and you’re bound to feel the wrath of Kucherov, Point, and Hedman. And how many times has the rest of the league seen Stamkos at his left circle blasting one-timers into the net? Answer: many, many times.

Jackets coach John Tortorella likes to preach discipline. They need to show it over a full series.

Columbus may have lost all three games against the Lightning this year by bad margins. But they had control for a while in their last game.

Their pace on offense wasn’t trying to keep up with Tampa’s. They protected the blueline well and weren’t over-aggressive or panicky against the Lightning’s forecheck.

Then Kucherov burned them and everything started breaking down.

Taking penalties, becoming less disciplined, and trying to match speed instead of matching intensity. Even if it’s not the sexiest brand of hockey, they need to trust they can pick and choose the more aggressive offensive situations and by physical in front of the net.

Bobrovsky is going to need one of those games (or two, maybe three) where he “stands on his head”.

There’s been plenty of times where a goalie got hot and won a series against a far superior team. But this will have to be the Vezina version of him if Columbus is to stretch the series.

Tampa needs to come out full force on offense and trust Hedman, Vasilevskiy, and Co. to make strong plays on the backend.

An aggressive style unlike any other can throw Columbus off early unless they have A+ self-control. This strategy broke down Columbus in their three meetings though, giving Tampa Bay the gaudy 17-3 advantage overall.

I know it’s typical to add both goalies here.

But I really think Bobrovsky regaining his other-worldly talents is the way for Columbus to win this thing. And if Vasilevskiy’s best completely cancels out Bob’s efforts altogether, then that will be demoralizing for the Blue Jackets.

The Lightning is supposed to win the Cup to many casual hockey fans. There’ll be a lot of bad noise if they don’t. Tampa Bay must be able to tune out all the past failures, sky-high expectations, and play loose hockey.

A lot easier said than done. But they’ve been able to use those shortcomings as motivation so far. Hopefully, for them, they won’t be uptight, overthinking things, or try to do too much too early.

And the Winner Is…

Why I think Columbus may be the best eighth-seed since the 2011-2012 Stanley Cup Champion LA Kings, I still can’t pick them.

Tampa Bay is superior to them in every spot except when it comes to the pairing of Jones and Werenski. Besides that, it would take Bobrovsky robbing the Lightning and a slower-paced game for the Blue Jackets to have a chance.

And their depth on offense would have to rise considerably with its shooting and pack-handling capabilities.

There are some really nice pieces on this Columbus team. They’d give most teams in this bracket a competitive series. They might do the same here if everything clicks into place.

But even in the most conservative pick I can make, I still have Columbus not reaching the seventh game.

So the question is, is there value in picking Tampa? The Athletic (subscription needed) recently used the wonderful—and more accurate than not—model to see what the chances of a Tampa Bay win were.

The number was very close to 75%, only giving Columbus a one-in-four chance. Given those figures and my own assessment, the -400 number seems fair.

It may take a lot on the table to win something considerable. But you’d have to be on the wrong side of the most historic playoff upset of all-time to lose.