Home > All > Terence Crawford vs Jeff Horn Odds and Prediction 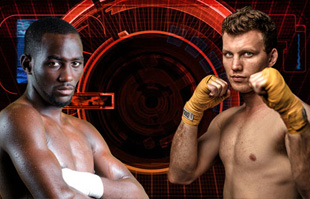 Horn and Crawford were originally penciled to fight each other on April 14, 2018 at the Mandalay Bay Events Center but the bout was moved to a later date after Crawford suffered a hand injury during his preparations for the showdown.

The Next Big Thing

Crawford is coming off a third round knockout win over Julius Indongo in August 2017, in a fight where he became boxing’s first undisputed champion in the four major belts era since Jermain Taylor in 2005. The 30 year old from Omaha, Nebraska is undefeated in 32 bouts with 23 knockouts.

Bud Crawford rose to worldwide prominence when he scored a 9th round TKO of Yuriorkis Gamboa in 2014. Since then, he’s captured the imagination of America and has been baptized as the next big thing in the sport.

This will mark Crawford’s debut at boxing’s talent laden 147 pound weight class. Bud ruled as lightweight and light welterweight champion in recent years. But the absence of big named foes in the lower weight class has seen him move up to a third division.

Like Crawford, Jeff Horn is unbeaten. The Australian Hornet is fresh from an 11th round TKO of Gary Corcoran last December 13, 2017. That fight was the first defense of the WBO welterweight title he won from Manny Pacquiao via disputed unanimous decision five months earlier.

Prior to boxing, Horn was a Physical Education teacher in Australia. He took up boxing late but was able to represent his native country during the 2012 Olympic Games, where he reached the quarterfinals stage.

He turned pro in 2013 and fought unknowns in his home country before catching the eye of Top Rank’s Bob Arum against Ali Funeka in 2016. That bout led to an opportunity to fight one of boxing’s all-time greats.

Horn had never fought before for a world title when he was chosen to fight Manny Pacquiao. He surprised Pacquiao with his confidence, power and durability and was able to pull off the big but controversial win over the Filipino living legend. Aside from Pacquiao, Horn has not faced a globally known opponent, making it difficult to gauge him as an elite fighter.

Luring Crawford To A War

Crawford is a massive -1000 favorite against the Aussie Hornet who came back at +600. Sure, Jeff Horn is unbeaten at 18-0-1 with 12 KOs and two fights ago, he defeated the great Manny Pacquiao to win the WBO welterweight title.

But if you watched the Pacquiao fight ( or even if you watch it again ), it was very obvious that he got outboxed by an over the hill legend. In fact, Pacquiao outlanded Horn 182-92 in total punches landed. Pacman was also more accurate at 32% against 15%. And yes, the Filipino 8 division world champion outlanded Horn in 11 of the 12 rounds of their bout.

Still, the Judges gave Horn the nod which of course was disputed by both fans and experts. But we’re not here to talk about Pacquiao-Horn. However, Horn’s trouble with boxing an older Pacquiao may be the difference against Terence Crawford.

Crawford is a very high IQ fighter who doesn’t get into too much trouble inside the ring. Bud has the patience of a predator and the precision of a surgeon. He can choose to box all night long or decide to end things on his own terms. There isn’t much that Terence Crawford can’t do inside the ring and there may not be much Jeff Horn can do to change that.

Horn is a rugged fighter, who uses physicality to frustrate his opponents and land his shots. What makes him the perfect brawler is that he is very durable. We saw that against Pacquiao. Likewise, Horn has good evasive skills despite his limited athleticism. He is able to dodge punches well and move decently around the ring. In most probability, he’d like to lure Crawford to a telephone booth war.

While Crawford knows what kind of power to expect from Horn, the same cannot be said otherwise. Bud Crawford is known as a very technical boxer but if he wants to go for the kill, he also has that skill. Six of Bud’s last seven fights have not seen a final bell while four of his last seven bouts have not gone past round 8. That shows you the punching power that he possesses. Horn won’t be expecting that but he’ll surely feel it on fight day.

Terence Crawford is probably the best fighter in the world today, pound for pound. Jeff Horn meanwhile, has yet to really prove his mettle against top notch competition, save of course from the near 40 year old Manny Pacquiao. Make no mistake about it, beating Pacquiao was no joke. But neither is facing Terence Crawford.

This is also Jeff Horn’s first fight outside his native Australia and while he may have gotten the benefit of the doubt in close fights back home, it will be an entirely different environment for the Hornet. Crawford has fought six times before in Nevada so this will be like home away from home for him.

This should be an interesting bout early on but once Crawford figures out his opponents, and it usually doesn’t take that long, this is going to be another surgical destruction. Horn is going to land here and there but he may be too tough for his own good against a dangerous fighter like Terence Crawford.

We’re picking Terence Crawford to win this fight via stoppage in the second half of the fight.