Home > All > The Match: Tiger Woods vs Phil Mickelson 11/23/18 Odds, Preview and Prediction 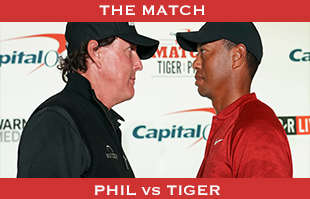 It’s almost here. The much awaited one on one winner take all exhibition match between two of this era’s top golfing rivals-Tiger Woods and Phil Mickelson is finally happening on Friday, November 23rd.

This one on one dream match was first talked about in May and it was only in August that it became official. Since its announcement, it has been fittingly dubbed as “The Match”. The 18 hole exhibition match will take place at the Shadow Creek Golf Course in Las Vegas, Nevada with the winner earning the $9M prize money and the loser going home empty handed.

The pair will also be staging various prop bets during the match to spice up the event. Initially, they have put up a $200K prop bet on whether Phil Mickelson will birdie the first hole.

There will be no live audience for the match as only sponsors and VIP are allowed at the golf course to witness the event. Instead, the  match will be the first time in sport history where golf will be a pay per view event. The cost of PPV has been pegged at $19.99. It can be viewed via live streaming at Bleacher Report Live, DirectTV and various cable TV providers.

The betting lines for the match have also been drawn. Aside from the the moneyline odds for the match, truckloads of prop bets from various betting sites have sprouted in recent weeks. For this discussion, let’s take a look at the odds, preview and prediction as well as an overview of some of the prop bets available for this once in a lifetime golf spectacle.

Tiger Back On Big Stage

We know the Tiger Woods story and how he fell from grace after becoming a golf legend. That’s another story but what we’re saying is that Woods was ranked somewhere in the 600s at this stage last year. But after one of the most remarkable turnaround in sports, Woods enters this week as one of the Top 15 players in the world and that itself is already a marvel that only the great Tiger Woods can do.

Over the course of 18 events in 2017-18, Tiger Woods moved his ranking from number 668 to number 13 in the world. He did so with seven Top 10 finishes and his first win in five years last September at the Tour Championship. Five out of those Top 10 finishes, including his victory last September, came in his last 9 outings. This also includes a 6th place finish at the British Open and a second place finish at the PGA Championship. It’s worth noting that Woods held the lead in the final round British Open and the PGA Championship but did not close out to win either. Still, his win last September proved that he is going to be a major contender next year.

While Tiger Woods’ stock is going up, the same cannot be said of Phil Mickelson who has been struggling to remain relevant to say the least.  Well, Lefty won a tournament this year- the WGC Mexico Championship back in March. That was his first tournament victory since winning the British Open in 2013. Mickelson placed in the Top 10 in just one other tournament for the rest of the season and was basically a non-factor in all four Majors this year, finishing no better than a tie for 24th in the British Open.

During Woods’ Tour Championship win last September, Mickelson finished 24 shots back. But it’s not at all that bad really as Mickelson did finish ahead of Woods in three of the previous five tournaments they played together. The most recent of these was at the Dell Technologies Championship in late August where Mickelson finished tied for 12th and Woods finished with a tie for 24th place. Mickelson heads to The Match as the 27th ranked player in the world. He is a five time Major winner, a three-time Masters Champion and a member of the Golf Hall of Fame. However, when it comes to comparison with Tiger Woods, he’s always played second fiddle.

Tiger Woods certainly didn’t show his best form at the Ryder Cup. But Mickelson was utterly terrible in France too. Tiger’s victory last September at the Tour Championship clearly shows that he can still win big tournaments. Meanwhile, not only is Mickelson far from matching Tiger’s current form, Phil’s game looked horrendous to end the year. If Mickelson can’t put the ball in the fairway, Tiger Woods has the clear advantage. I’m rolling with Tiger Woods to win comfortably. We’re picking Tiger Woods to beat Phil Mickelson in The Match. The odds on Tiger as a favorite aren’t that bad really but if you want better value, check out our proposition:

BetDSI currently has several prop bets for the match but there’s one that’s going to make you a winner if Tiger wins:

In most probability, the player is going to make more birdies in this match is going to win this. And if you’re betting for Tiger Woods to win, then why not just bet on this? You’re getting Tiger here at -110 here instead of the -200 you are going to pay for him if you bet straight up. Prediction: Tiger Woods -110

As we said, there are plenty of prop bets available for this big event. Here are other prop bets from betmaker Betonline.ag that might interest you:

Player to have the most birdies

Woods or Mickelson to hit a shot into a water hazard

Woods or Mickelson to hit a shot out of bounds

To lead after three holes

To lead after nine holes

Will Mickelson birdie the first hole?

So what are you waiting for? Choose your bet now and be a part of this one of a kind golfing experience.