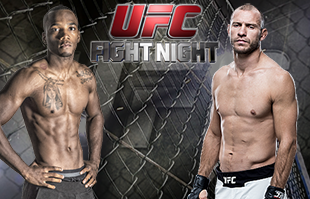 The UFC Returns to Singapore on June 23, 2018, bringing one of its more popular stars to fight in the main event.

Donald ‘Cowboy’ Cerrone is known as one of the busiest fighters in UFC history and he is also known to be one of the promotion’s top showmen. Cerrone owns 13 post-fight bonuses and is the first fighter in the UFC to win all four kinds of post-fight bonuses: fight, knockout, submission and Performance of the Night awards.

Cerrone’s opponent is the unranked Leon Edwards who is only starting to hit his stride in the UFC. After a mediocre start to his UFC career, Rocky has won five fights in a row and has been looking for a signature win that will put him in the rankings.

Leon Edwards is getting his big break. After calling out Donald Cerrone last year, Edwards finally gets his chance to lock horns with ‘Cowboy’ as the two welterweights square off in the main event of UFC Fight Night 132 in Singapore on June 23, 2018.

Edwards is the former BAMMA welterweight champion who moved to the UFC in 2014. He had an up and down start to his UFC career after losing two of his four matches inside the UFC octagon. But in between losses, Edwards recorded the second fastest finish in UFC welterweight history with an 8-second demolition of Seth Baczynski at UFC Fight Night 64 in 2015.

The 26-year-old Englishman has now settled down and has won five bouts in a row since his last defeat to Kamaru Usman. In his most recent bout, Edwards knocked out Peter Sobotta with one second left in the fight, giving him yet another distinction, this one for a tie for the latest finish in a three-round UFC fight. With things going his way, Edwards now gets the chance of his life when he faces the cerebral Cowboy Cerrone.

Looking For One Final Run

Once one of the busiest fighters in the UFC, Donald Cowboy Cerrone has slowed down his schedule a bit as he’s grown older. The 35-year-old Cowboy is a 13-time post-fight bonus winner and a former title challenger at the lightweight division. But it seems like age has finally caught up with one of the most beloved fighters in the UFC roster.

Cowboy recently broke out of a three-fight losing skid when he knocked out Yancy Medeiros in just one round at UFC Fight Night 126. Before that though, Cerrone suffered consecutive losses to Jorge Masvidal, Robbie Lawler, and Darren Till. With his stock falling and his welterweight ranking down to #11, Cowboy is looking for one final run at a world title.

Edwards is favored in his first big bout as he has the clear advantage in youth and athleticism. Being nearly a decade younger than Cowboy, he is having the best stretch of his UFC career. Rocky is an underrated grappler who has three submissions under his belt but it’s his one-punch knockout power that opponents should be wary about.

Although he only has two knockouts in seven UFC victories, Edwards entered the UFC known for his punching power. In fact, we saw him with that 8 seconds KO win during his first UFC victory. Against Cerrone, we should watch out for his big punches as three of Cowboy’s last four losses have come via knockout.

When you talk about Donald Cerrone, you talk about an action-packed fighter who loves to please the crowd with his non-stop attack. Cerrone is a versatile fighter who has a kickboxing and Muay Thai background. What makes him special though is his ability to finish fights on the ground.

25 of Cowboy’s 33 MMA wins have come via stoppage. 16 of them have come via submission. A very creative fighter on the canvass, Cerrone holds a black belt in Brazilian Jiu-Jitsu. The thing you’ve got to watch out for Cerrone on the ground is when he has your back. He’s one of the best in ending the fight with chokes.

Wear Down With Takedowns

The older Donald Cerrone has become, the more susceptible he has been for knockouts. That’s one thing to consider here because Leon Edwards is a heavy hitter. Given that he is younger, you’ve also got to think that the longer this fight goes, the better it will be for Leon Edwards. The key for him is to avoid getting taken down. That’s where Cerrone is at his most dangerous.

Cerrone is a very smart fighter, that is if he doesn’t get caught early. Knowing that he’s up against a younger and more athletic fighter, he’ll want this to be down and dirty. Cowboy will want to test his striking first but eventually, he’s going to try and wear down Edwards with takedowns. Cowboy has the experience to beat Edwards. It won’t be a walk in the park but we’re picking Donald Cerrone to beat Leon Edwards.

Ovince Saint Preux looks to rebound from a loss as he faces the up and coming Tyson Pedro in the co-main event of UFC Fight Night 132 in Singapore.

Has Seen It All

A staple of the UFC’s light heavyweight division since 2013, Ovince Saint Preux has seen it all, from five-round headliner fights to challenging for the world title. Now the decorated 35-year-old veteran finds himself traveling across the globe to face one of the 205-pound division’s young lions in what should be a fun fight to watch.

Saint Preux has won just half of his last 10 fights and is coming off a technical submission loss to Ilir Latifi at UFC on Fox 28 last February. But prior to that, he was one of the hottest fighters in 2017 with three stoppage victories including a couple of Von Fluke chokes against Marcos Rogerio De Lima and Yushin Okami.

One of The Younger Fighters

Tyson Pedro is one of the younger fighters in the UFC’s roster. Having fought for five years, he entered the UFC scene as a replacement for Luke Rockhold at UFC Fight night 101 where he submitted Khalil Rountree via rear naked choke and won Performance of the Night honors.

He’s fought only eight times overall and has lost just once, to Ilir Latifi by unanimous decision at UFC 215. Pedro successfully bounced back from his first career defeat with an impressive kimura hold submission of Saparbek Safarov at UFC 221 just last February 11th.

Saint Preux is one of the bigger bodies at light heavyweight but he has the athleticism to stay light on his feet while keeping his ability to explode. He does well when he is coming forward. OSP is deceptive with his striking attack and can change angles while catching opponents with check hooks and counter punches.

An ex-college football player, Saint Preux has added a very good wrestling game to his already tough to match up with athleticism. From his ability to watch out for underhooks to applying hustle in his hips, OSP has become more confident with his grappling in recent years.

Tyson Pedro doesn’t have Ovince Saint Preux’s athleticism nor does he have the experience of his opponent. But he’s a promising talent who’s shown steady improvement from fight to fight. He loves to lead off his attack with kicks from different angles and quickly looks for opportunities to land combinations. In recent fights, he’s added a stiff jab to his offensive attack.

The Australian has won most of his bouts by submission and as a jiu-jitsu practitioner, he is very comfortable fighting on the ground. Pedro is smooth with his guard passes and likes to work to get to mount his opponent. If he is able to get his way with his grappling, Pedro’s length could be a big problem for Ovince Saint Preux.

But Saint Preux has proven time and again that he is one of the more difficult fighters to hold down. Pedro can very well ground Saint Preux but the latter’s improvement on the ground and his urgency to get back to his feet will keep Pedro working hard to get what he wants. If OSP somehow gets on top position, watch out for his dangerous strikes.

Pedro has the length and skills to trouble Saint Preux and he has more punching power than his record suggests. However, unless he can bother Saint Preux early with something big, then I expect the more experienced fighter winning closely contested rounds. OSP works at a higher pace and that should be a big difference. This one has the makings of a close fight and we’re going with the veteran fighter to win here. We’re picking Ovince St. Preux to win by close decision.