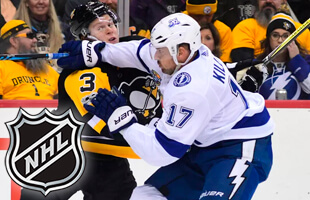 Despite all of that tragedy, however, the Lightning still have the hockey betting sites on their side. Coming into the new season, which begins on October 2, the Tampa Bay Lightning are the favorites to win the 2019-20 Stanley Cup at +750 betting odds. If they do so, it’ll be their second championship in franchise history.

According to online sportsbook Bovada, the Toronto Maple Leafs come in the second position at +900 betting odds behind the Tampa Bay Lightning’s +750. In the third sport, we have the Vegas Golden Knights at +1100, with the Boston Bruins in No. 4 with a +1300 figure. Rounding out the top five, the Colorado Avalanche place fifth at +1500 betting odds. Coming up in the sixth position, the St. Louis Blues take that spot at +1500, while the Florida Panthers and Dallas Stars have a tie for seventh at +1700. For the No. 9 position, we have another tie, this time the Nashville Predators and San Jose Sharks sitting at +1800 betting odds.

Are the Maple Leafs Overvalued? What About the Panthers?

I’ve seen some chatter about these two teams concerning their odds. For one, the Toronto Maple Leafs, they’ve been bounced out of the playoffs for two consecutive seasons. For the other, the Florida Panthers, they’ve never won a Stanley Cup in franchise history. So, why so high on the odds board?

For the Toronto Maple Leafs, it certainly ponders the mind of why they’re listed over the Boston Bruins on the odds table. Like I’ve previously mentioned, they’ve been ousted in the first round of the postseason for two straight years now, with both of those exits by the hands of the Bruins. This season will be an interesting one for Toronto, which may explain the odds a bit.

First off, there’s a lot of pressure on Mike Babcock to get the Maple Leafs out of the first round this season. If not, it could cost him his job. So with that being said, this season could be a really great one for Toronto if they step it up for their coach, or it could be one that may result in even an early firing with how hot the seat is for Babcock. Second, despite the Boston Bruins getting older in age, they’re still locked-and-loaded for another deep run in the Stanley Cup playoffs. On top of that, let’s be honest here, they’ve dominated the Maple Leafs in recent history. With that being the case, I just can’t find myself to bet against Boston. They have Toronto’s number, plus more.

A lot of people are shocked to see the Florida Panthers so high on the oddsboard at +1700, but you really shouldn’t be. The Panthers are going to be a really good hockey team this season.

The Panthers have all of the tools for a massively successful season in South Beach. Florida was already a team with a very potent offense, making scoring look easy left and right. With the added talent, the Florida Panthers are not only poised for a playoff appearance, but they’re prepared to go the distance. Shout out to South Florida!

Let’s go over the top favorites to win the 2019-20 NHL Stanley Cup championship.

The Tampa Bay Lightning are loaded, plain and simple. Not only were they historically great in the 2018-19 campaign, but they’ve improved on that over the offseason to make them an even better team. Just wow. They’ve literally stepped up at every position when it comes to their depth, and the team is so riddled with talent, that there are literally no concerns with this team whatsoever. When compared to the rest of the league, there aren’t many teams that can compete with them, and there aren’t any that you could say are better. And also consider this: After their historic exit from the playoffs last season, there’s sure to be a chip on their shoulder here in the new campaign.

Let’s just get to the point: Not only do the Lightning have the “caliber” to win the Stanley Cup, this season is a “Stanley Cup or Bust” type of season. I’m being serious, if Tampa Bay doesn’t win the championship, there will be tremendous disappointment among this franchise. With that being said, as loaded as this team is, the time may be now for the Tampa Bay Lightning to get their second Stanley Cup in franchise history.

Like I’ve already mentioned, it’ll be fascinating to see what the Toronto Maple Leafs do in 2019-20. Over the offseason, they would go out and make a collection of moves that would lead to them being an improved team from last campaign. Sure, the Maple Leafs will get into the playoffs, there’s no issues there, but I think Toronto is more focused on the Atlantic division championship than just the postseason. With that being said, they have their work cut out for them with the Tampa Bay Lightning being in the same division. As far as the playoffs are concerned, they do worry me when it comes to how physical they are compared to other teams, it’s certainly on the lower end. If they get matched up with the Boston Bruins for another round or another team in the first round that likes to use their physicality, they may very well get bounced out again. If they get the right opponent, Toronto can certainly win a best-of-seven series, but that’s the problem, they have to get the right opponent.

The Maple Leafs are a good team, nobody is debating that, and they certainly have the potential to “make some noise”. But can they get over the hump though? The narrative at the moment is that Toronto is more of a ‘pretender’, rather than a ‘contender’, for the Stanley Cup. And when you look at other teams such as the Tampa Bay Lightning, Boston Bruins, and hell, even the Florida Panthers, it’s quite a reality for that to be the case again. With that being said, the Toronto Maple Leafs may be a bit overrated.

Across the entire landscape of the National Hockey League, the Vegas Golden Knights are one of the most dynamic teams. Not just that, but they’re one of the deepest. Their elite defense, as well as massive depth at forward, makes the Golden Knights an almost guarantee to get into the Stanley Cup Finals. But you know the old saying: “The best teams on paper don’t always win.” With that being said, they do have some concerns entering the new season. The depth on defense is a worry for Vegas, as well as goalie Marc-Andre Fleury’s longevity.

Despite these concerns over the past couple of seasons though, the Golden Knights have managed to have success, including a trip to the Stanley Cup Finals in the 2017-18 campaign. They’re poised for yet another deep run in the postseason this go-around as well. Their ownership is top-notch, and they also have a very effective farm as well that will also help in their mission for a Stanley Cup. And honestly, if this team doesn’t get back to the Finals this season, their performance will be considered a bust. With this much talent, you have to at least win the Western Conference if you’re the Vegas Golden Knights.

The Boston Bruins should be a very interesting team to watch this season. On one hand, the Bruins have the potential to have a very successful season. On the other, we could be seeing the beginning of a decline for Boston — after all, they are aging, and father time is undefeated and will eventually catch up with this team. Even though they beat them in the first round last season, the Bruins will have to keep a little of their focus on the Toronto Maple Leafs, a team who has improved over the offseason. And oh yeah, how can I forget, they also have to worry about a record-setting Tampa Bay Lightning as well, and they got even better since then through acquisitions.

Good luck, Boston, especially considering they didn’t improve themselves at all, just pulling a couple of short-term contracts. And here’s the thing, and why the lack of an offseason for the Bruins may come back to bite them: All teams of the Florida Panthers, Detroit Red Wings, Ottawa Senators, Buffalo Sabres and Montreal Canadiens also improved, and will be making their way up the standings this season. With all of that on the table, I’m seeing a possible first round exit for the Boston Bruins when it’s playoff time — the East is stacked.

Ever since signing the legendary Jaromir Jagr a few seasons ago and having a little taste of playoff success from then until now, it seems to be the Florida Panthers are serious about becoming an authentic Stanley Cup contender. And their main goal: Replicate the 1995-96 season where the Panthers would make their only appearance in the Stanley Cup Finals in franchise history. Certainly, the expectations are playoff or bust this season within management and their locker room. But why not a deep run in the postseason? After their offseason, Florida would solidify themselves as one of the most well-rounded teams in the National Hockey League.

But here’s the problem for the Panthers when they do get to the playoffs: The Eastern Conference is loaded this season. Judging by this campaign’s Florida team, I could see them getting off to a hot start that eventually leads into a wild card position to put them into the postseason. When that happens, anything can happen, we definitely learned that last year in the series between the Tampa Bay Lightning and Columbus Blue Jackets. But on paper, it’s going to be tough, but with as well-rounded as the Florida Panthers are, they could surprise a lot of people this year and put themselves back into the Stanley Cup Finals — just like 1995-96. Go ahead and place a bet on them now, I have a feeling they may increase in the odds with what their potential is.