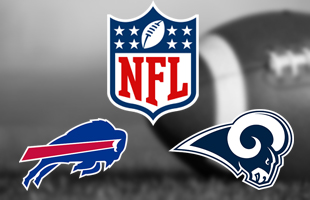 The Buffalo Bills open their 2022 campaign by visiting the defending champions Los Angeles Rams on Thursday night in the 2022 NFL Kickoff Game.

Buffalo was seconds away from advancing to the AFC title game for the second consecutive season but allowed the Kansa City Chiefs to steal the game in overtime. Meanwhile, the Rams went all the way to Super Bowl LVI and won the Lombardi Trophy by defeating the Cincinnati Bengals.

The Bills enter the 2022 season as the betting favorites to win it all this season. Buffalo made some big moves during the offseason including the acquisition of defensive star Von Miller, giving the team a defensive complement to superstar QB Josh Allen who is also the odds-on favorite to win the NFL MVP award. Allen will have 9 offensive starters returning for a Buffalo offense that is expected to be one of the best in the business.

Allen’s top target will be Stefon Diggs but he will also have Gabriel Davis, Isaiah McKenzie, and newly signed slot receiver Jamison Crowder. Devin Singletary and James Cook will be their top rushing options. Tight end Dawson Knox is returning after his best NFL season. Meanwhile, the 8-time pro-bowler Miller will be their new defensive cog.

The Rams will be looking to become the 9th team in NFL history to repeat as champions. The team lost several title pieces including Miller, Andrew Whitworth to retirement, and Robert Woods to the Tennessee Titans. However, the Rams will be getting QB Matthew Stafford and Super Bowl LVI MVP Cooper Kupp back. However, Stafford is dealing with a shoulder issue.

Running back Cam Akers is also back while the team signed Chicago wide receiver Allen Robinson II to help fill the void left by Woods. Robinson will join Van Jefferson as Stafford’s key weapons. On defense superstars, Aaron Donald and Jalen Ramsey will be back to lead the team on the other side of the field.

Matthew Stafford is expected to start for the Rams but he is suffering from elbow tendinitis and missed the entire preseason. While he is available to play in this game, the injury could affect the big passing game he is known for. Meanwhile, Josh Allen will lead one of the top offenses in the league. The Bills improved their defense by adding former Rams defensive stalwart Von Miller. That acquisition could be what turns this Buffalo team from contenders to champions this season.

It’s not every day that we get to see the defending Super Bowl champions open their title defense bid at home against the current betting favorites to win the Super Bowl. No question that this is the biggest matchup in Week 1. Between these two powerhouse teams, I’m picking the healthier team and the one who is more hungry to win it all this year.

Buffalo was favored by at least 2.5 points 14 times last season and they covered the betting spread eight times. Meanwhile, the Rams won their only game last season as underdogs by 2.5 points.

The Buffalo Bills have emerged as the top title contenders heading to the season. With the talent they have on both sides of the field, there is no question that Buffalo has one of the best lineups other. The question however is if they can live up to the expectations. Definitely, the law of progression says yes. However, they are facing a real test in Week 1.

The Rams are playing at home and are a +2.5 point which is tantalizing. However considering that Matthew Stafford is playing compromised, it’s hard for me to trust the Rams at this point of the season. The betting favorite has covered four times in the last five meetings between these two teams.

The total has gone over in four out of the last five head-to-head meetings between these two teams. The over is also 3-0 in their last three games played in Los Angeles.

Buffalo went over the total eight times last season while the Rams saw the total score over the betting total 9 times.

Both teams are good on both sides of the football field. However, when you talk about the Bills and Rams, it’s more of these teams’ offense than anything else. Josh Allen is the preseason MVP betting favorite and he will be looking to lay his claim as early as week 1.

Stafford may be playing with an injury but remember he played through it during their Super Bowl run. This is nothing new to Stafford so I expect him to be at his best form on game day. This is also his second season under Sean McVay and he should be more familiar with the system and the weapons he has. That should give him better-scoring chances here.

The Los Angeles defense may take a step back with Von Miller leaving. Meanwhile, the Bills went over the total in five out of their last seven games played last season and four out of their last five road games. Give me these teams to figure in a shootout.