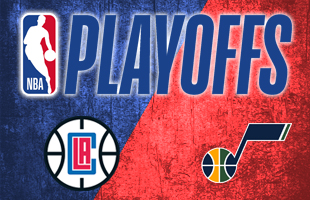 This is the last series to start because the Clippers were the final team to make it to the second round. Los Angeles fell behind 0-2 and 2-3 against Luka Doncic and the Dallas Mavericks in round one before winning the series in Game 7. Meanwhile, the Jazz head home with plenty of rest as they took care of the upstart Memphis Grizzlies in five games, winning the final four games of the series.

The LA Clippers are the last team to make the second round after being taken to a 7th game by the Dallas Mavericks. Los Angeles trailed 3-2 but won a gritty game 6 in Dallas behind 45 points from Kawhi Leonard. Leonard led the Clippers once again in Game 7 with 28 points as they won at Staples Center for the first time in the 2021 playoffs.

Paul George shot just 5-15 from the field in Game 7 but he finished with 22 points, 6 rebounds, 10 assists, and 3 steals in an all-around effort. The Clippers also got plenty of help from Marcus Morris Sr. who made seven of nine three-pointers for 23 points in the closeout game.

After dropping Game 1 of their first-round series against the Memphis Grizzlies, the Utah Jazz won four straight games to enter the conference semifinals. Utah played without Donovan Mitchell in Game 1 and they have yet to lose a game with Spida in this year’s playoffs.

The Jazz led the league in three-point makes per game at 16.7 during the regular season. They also ranked 4th in three-point percentage at 38.9% this year. Utah averaged 20.3 three-pointers made per game in the final three games of the Memphis series.

Head to head, the Jazz have won seven out of their last 10 meetings against the Clippers. Utah is also 5-0 in its last five home games against Los Angeles The Jazz are 4-0 in their last four playoff games and are unbeaten in the current postseason with Donovan Mitchell playing.

Both these teams enter this series on a roll. The Clippers won four out of their last five games against Dallas in the first round. Utah won four in a row to beat the Grizzlies in five games but the Clippers won’t be as easy to beat, not especially when Kawhi Leonard is feeling it at the moment.

Leonard averaged 32.1 points per game on 61.1% field goal shooting and 43.4% from three-point distance. If Paul George can put up solid numbers, the Clippers should get the upset in Game 1.

The Clippers barely got past the Mavericks as they were taken to the full seven-game route. However, the Clippers won four out of the last five games of that series and three of their wins came by double digits. Dallas meanwhile outgunned an inexperienced Memphis team but will find the Clippers hard to handle with their defense and slow-paced game.

I think that the Clippers are just starting to scratch the surface of how good they can be. I’ll take the underdogs and the plus points in a game that could be decided by one basket.

The under is 16-6-1 in the LA Clippers’ last 23 games played. Los Angeles has seen the total go under in five out of their last six games as underdogs. The under is 6-0-2 in the Clippers’ last eight games in the Conference semifinals, 19-5-3 in their last 27 games against an opponent with a winning percentage of higher than .600, and 7-2-1 in their last 10 games after a straight up win.

Head to head the total has gone under in four out of the last six meetings between these two teams.

Utah scored 120+ points in each of their last four games against the Grizzlies but the Clippers ranked 6th in scoring defense during the regular season.

The Clippers won four out of their last five games against the Mavericks in the first round by holding Dallas to an average of 100.4 points per game during that span, with the Mavs scoring 108 or fewer in four of those games.

The Jazz can put up points on the scoreboard but the Clippers have the slowest pace in the playoffs at 92.86. Give me the under.