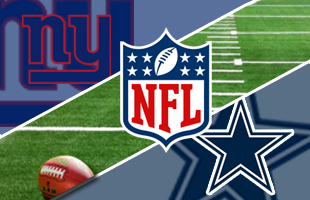 The New York Giants make the trip to Texas to take on the red-hot Dallas Cowboys at the AT&T Stadium on Sunday in this divisional battle.

New York is fresh off its first win of the season, a 27-21 win over the New Orleans Saints in week 4. The Giants are 1-3 on the season, 2-2 ATS, and they are at the bottom of the NFC East along with the Philadelphia Eagles. Despite their record, the Giants have kept their games close with only one of their four games decided by more than a touchdown.

On the other hand, the Cowboys are on top of the NFC East with their 3-1 record and they are a perfect 4-0 ATS this season. Dallas won their third straight game last weekend, dealing the Carolina Panthers their first loss of the season, 36-28. With the NFC East division notoriously a weak one, the Cowboys are looking to pull away early

The New York Giants were off to a tough start as they lost to a good Denver Broncos team 27-13 in Week 1. They have since been very competitive, dropping a 30-29 game to the Washington Football Team and losing a 17-14 contest against the Atlanta Falcons. In their last game, the Giants finally got their game going as they defeated the New Orleans Saints 27-21.

QB Daniel Jones passed for 402 yards with two touchdowns and one interception while Saquon Barkley rushed for 52 yards on 13 carries with one touchdown. Kenny Golladay also had a big game with six catches for 116 receiving yards for the Giants.

The New York defense has looked great this season and they have allowed a total of 95 points in the first four games of the season. The Giants’ defense has allowed only one opponent to score 30 points this season.

The Dallas Cowboys suffered a heartbreak on opening night when Tom Brady set up the game-winning field goal with a last-minute drive, giving the Bucs a 31-29 win over the Cowboys. Dallas has since bounced back, winning three in a row. The Cowboys defeated the Chargers 20-17, beat the Eagles 41-21, and then vanquished the Panters 36-28 last week.

Dak Prescott passed for 188 yards with four touchdowns on 14-22 passing. Ezekiel Elliott had a monster game with 143 rushing yards and one touchdown run. Amari Cooper meanwhile, caught three passes for 69 yards with one touchdown catch. Trevon Diggs has five interceptions on the season and has one each in their first four games.

Dallas’ offense has been explosive at home, scoring an average of 38.5 points in their first two home games. Last week, they scored 20 points in the third quarter alone.

Had it not been for Tom Brady’s heroics, Dallas would’ve been 4-0 this season. That’s how well they have started the 2021 campaign. Offensively, they have so many weapons and with Dak Prescott getting more confident by the week, there’s little you can do really to stop them from scoring.

The Giants beat the Saints on the road in week 4 and that was a big win. Saquon Barkley finally looks healthy while Daniel Jones continues to improve. Defensively, the Giants have conceded just 95 points in 4 games and if the offense does its job, this is a formidable team.

But I think that the Cowboys have too many weapons for the Giants’ defense. From Dak to Lamb, Ezekiel Elliott, and Amari Cooper, there’s no shortage of offensive options in Dallas. This has the makings of a shootout and New York doesn’t have enough bullets to win it.

Head to head, the Cowboys are 6-2 ATS in their last eight games played against the Giants.

Laying a touchdown is always a big risk, especially in a competitive league like the NFL. However, the Cowboys have been one of the best teams this season and their offense has been more deadly at home, scoring 41 and 36 points in their first two games at Cowboys Stadium.

The Giants have an underrated offense and play good defense but in this matchup, I think New York is outclassed. These teams are not just at the same level right now. The Cowboys are playing at a very high level and I don’t think the Giants can keep pace.

Head to head, the total has gone over in four out of their last five games. The over is also 9-3 in the last 12 games played in Dallas.

The Cowboys have a very explosive offense and they are capable of putting a lot of points on the scoreboard, especially at home. But they are also a team that keeps their running backs involved in games. The Dallas defense has also allowed 81 rushing yards per game,6th best in the NFL and they rank 11th in opponents’ third-down conversion at 37.5%.

Because of this, the Dallas offense should own and control the possession time which will force Daniel Jones to make the big plays to keep up with them, and this could lead to turnovers. The New York offense is scoring just an average of 20.8 points per game so Dallas doesn’t have to flex its offensive muscles to win this game.