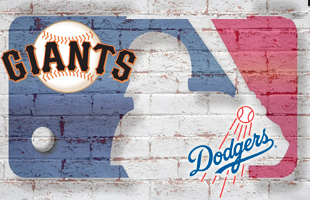 The San Francisco Giants and Los Angeles Dodgers continue their battle for NL West supremacy on Monday night when they open a four-game set at Dodger Stadium.

These teams have played already nine times this season and it’s the Dodgers who lead the season series 6-3.

San Francisco is coming off a 2-1 series loss to the St. Louis Cardinals after dropping the last two games of that series. Meanwhile, LA lost to Colorado on Sunday but take their three-game set against the Rockies with a win in the first two games of the series.

The San Francisco Giants won seven of their last nine games before the All-Star break but they lost their last two games played, both against the St. Louis Cardinals to drop that series 2 games to 1. The Giants are just one game ahead of the Dodgers in the NL West standings.

San Francisco has been one of the biggest surprises of the season as they are tied in the majors with an average of 4.93 runs per game scored. The Giants are also 5th in OPS at .762 and they are the best pitching team in baseball at only 3.63 runs allowed per game this season.

Kevin Gausman will take the mound on Monday and he’s looked good for the season with a 9-3 record in 18 starts to go along with an ERA of 1.73 and a WHIP of 0.83. Gausman however is just 1-2 in his last three starts, even though he’s allowed just six earned runs on ten hits in 18 innings pitched during that span.

The defending World Series champion Los Angeles Dodgers opened the second half of the season by winning the first two games of their three-game series against the Colorado Rockies. The Dodgers lost Game 3 of that set to fall behind the Giants by one game in their tight divisional battle.

Tony Gonsolin will get the call to start for the defending champs on Monday. The 27-year old right-hander has started six games and has one relief job this season. He has a record of 1-0 with an ERA of 2.13 and a WHIP of 1.30. He has not allowed more than one earned run in each of his last seven outings. Gonsolin has a 31/15 K/BB ratio in 25.1 innings of work this season.

Head to head, the Dodgers are 8-3 in their last 11 meetings against the Giants.

Kevin Gausman dominated the defending World Series champions in their first meeting of the season but he struggled terribly in their most recent encounter where he allowed three runs on three hits with five walks and only four strikeouts in five innings of pitch work.

On the other hand, Gonsolin has pitched only five innings against San Francisco in his career, so the unfamiliarity could lead to hitting issues for the Giants as they try to figure out his pitching arsenal here. Overall, however, he’s pitched very well for the Dodgers this year, although in limited innings.

This game could go either way really with both teams playing very well as of late. The Giants are doing a great job this month as they have an OPS of .820 in July. However, I will go with the home team here because their loaded offense has even been better this month.

Head to head, the total has gone under in two out of the last three meetings between these two teams.

Both these teams are red hot on the plate but in making this pick, I’m banking on the pitching staff of these two teams.
The Los Angeles bullpen has a solid 2.86 ERA for this month while the Giants’ relievers are averaging a decent 3.76 ERA in July. These teams lead the MLB in the fewest runs allowed per game so this should be a low-scoring contest. The Dodgers have also allowed two or fewer runs in six of their last eight games at home and don’t forget that Dodger Stadium isn’t a hitter-friendly ballpark.