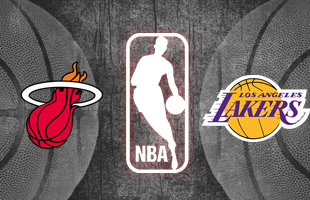 The Miami Heat continue their road trip with a visit to Staples Center and a date with the Los Angeles Lakers on Wednesday night.

Miami heads to this game with back-to-back losses against the Magic and Nuggets which came after they won five straight games. Miami is now 7-3 on the season and they are on top of the Southeast Division and tied for first in the Eastern Conference team standings.

Los Angeles defeated the Charlotte Hornets the last time out. The Lakers are 6-5 on the season and they are 4th in the tough Pacific Division and 8th in the Western Conference team standings. Los Angeles has played without LeBron James during their last three games and he is expected to miss more games with an abdominal injury.

Miami is coming off a double-digit loss to the Nuggets in Denver in a game that was marred by the ejection of Nikola Jokic after a shove that sent Markieff Morris to the ground. The defeat was their second straight after a strong 7-1 start. Still, Miami is among the early East leaders and they will be trying to improve their record against a hurting Lakers.

Jimmy Butler led the Heat with 31 points while also grabbing five rebounds and issuing 8 assists. But Kyle Lowry went scoreless in 37 minutes and Tyler Herro was shut down to 11 points by the Denver defense. Bam Adebayo also had 10 points and 10 rebounds but wasn’t a factor. Good thing for Miami, DeWayne Dedmon, and Markieff Morris each scored 10 points to help the team.

The Heat rank 10th in the NBA in scoring at 110.1 points per game. They are the league’s top rebounding team at 49.1 boards grabbed per contest and are 7th in passing at 24.4 assists per game. Miami also ranks 6th in defensive rating at only 103.2 points per 100 possessions allowed.

The Lakers avoided what would have been another disastrous collapse when they were able to beat the Charlotte Hornets in overtime in their last game. Los Angeles was well on its way to victory when they squandered a late double-digit lead and gave the Thunder a chance to win the game. Luckily for the Lakers, AD’s defense held late in the game and his offense won it in OT.

Davis led the Lakers with 32 points and 12 rebounds while Russell Westbrook had a triple-double with 17 points, 12 rebounds, and 14 assists. However, Russ also led the team with 7 turnovers. Carmelo Anthony hit the big buckets for the Lakers as he finished with 29 points on 69% FG shooting and 70% from the three-point country.

Head to head, Los Angeles Lakers are 6-4 SU in their last 10 games played against the Miami Heat.

Miami is off to a strong start. Tyler Herro is the sixth man betting favorite while Coach Spo is the new coach of the year odds on favorite. The addition of Kyle Lowry has done wonders for this team and it looks like the Heat will be a contender this season. Miami is currently on a long road trip and coming off a tough loss to the Nuggets. However, the Lakers have more problems than them.

Although he has been called the “washed king” in the last couple of years, there’s still no doubt that the success of the Los Angeles Lakers depends on whether LeBron James is there or not. When he missed a huge amount of games in his first season there, they missed the playoffs. When he was healthy, they won the title in 2020. Last season, injuries hobbled him and AD, and they were ousted in the first round of the playoffs.

This year, this team might not even make the playoffs without LeBron James. Although they have one of the deepest lineups in the league, the chemistry isn’t there and they don’t play well as a unit. Los Angeles is just 14-19 without James since last season. The Lakers have been so inconsistent that they’ve blown huge leads to teams like the Thunder or Hornets. It’s hard to trust the Lakers right now.

Los Angeles against the spread is a no-no for me. These Lakers are just 3-8 ATS on the season and 2-6 ATS in eight home games. Los Angeles has even become more unpredictable without LeBron James and with Russell Westbrook calling the shots.

The Heat are looking to bounce back after a double-digit loss to the Nuggets and they still have not forgotten the 2020 NBA Finals yet that they have won and covered in the out of their last four meetings since losing to the Lakers in the Orlando bubble. Give me the Heat at -4.5.

The Lakers trends point to the UNDER but if you look at Los Angeles’ last 10 games, they have hit a total of 214.0 points seven times. They scored 126 against the Hornets so that shows that if they hit their shots, they can score big even without LeBron James. The problem though is if they will hit their shots.

The Heat are one of the best defensive teams in the league but for out of their last five games have hit the over and they have allowed 110 or more points in each of their last four games played.

Los Angeles meanwhile is ranks 6th in the league in field goal attempts and they are averaging a combined 223.9 points per game with their opponents. Give me the over.