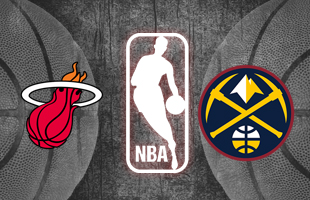 The Miami Heat open their five-game road trip with a visit to the Ball Arena on Monday, where they will test the Denver Nuggets.

Miami is off to a strong 7-2 SU and ATS start and they are one of the best teams in the opening stages of the current season. The Heat are coming off their best win of the season last Sunday, a 118-115 victory over the Utah Jazz who are the best team in the West right now. Tyler Herro has been sensational for Miami as has been Jimmy Butler.

Meanwhile, the Nuggets have struggled to start the campaign as they are just 5-4 in their first nine games played. The Nuggets are still without superstar guard Jamal Murray who is still on the mend from last season’s injury. Nikola Jokic is playing at an MVP level once again but the Nuggets have failed to get the production they expected from Michael Porter Jr. who is just putting up 9.9 points per game 35.9% field goal and 20.8% three-point shooting.

Miami is 7-2 on the season and they are on top of the Southeast Division, 0.5 games ahead of the surprising Washington Wizards. The Heat saw their five-game winning streak ended by the Celtics but they bounced back with a solid win over the Utah Jazz the last time out.

Jimmy Butler looks like he has returned to his 2020 form while leading the Heat with 24.7 points per game. But it has been third-year man Tyler Herro who is turning heads with averages of 21.3 points, 5.7 rebounds, and 3.9 assists per game while shooting 47.4% from the field and 42% from deep. Kyle Lowry has been a huge pick-up and he is leading the Heat with 7.5 assists per game while also scoring 11.3 points per game. Bam Adebayo has been a steady presence with 19.4 points, 12.0 rebounds, and 1.0 steals per game.

The Nuggets are 5-4 on the season and they are currently third in the Northwest Division, 1.5 games behind the division leaders Utah Jazz. Denver snapped a two-game losing streak to the Grizzlies with a narrow 95-94 win over the Houston Rockets in their last game.

Nikola Jokic is having a continuation of last season’s brilliance. The reigning NBA MVP is doing it all for Denver, leading the team with 25.4 points, 13.4 rebounds, 5.4 assists, and 1.6 steals per game. Will Barton is their second-leading scorer at 15.2 points per game while Aaron Gordon is averaging 12. 2 points and 5.8 rebounds per game. Meanwhile, Michael Porter Jr. continues to struggle at 9.9 points per game and only 20% from behind the arc.

The Nuggets are ranked 27th in the league in scoring at only 100.7 points per game scored. They are also only 26th off the boards with an average of 44.1 rebounds per game and are 13th in passing at 23.7 assists per game.

Miami is off to a better start than Denver and the Heat have beaten better opposition than the Nuggets this season. Tyler Herro is off to an incredible start while Jimmy Butler is slowly climbing up the MVP ladder. Meanwhile, the addition of Kyle Lowry has proved to be the big difference maker for this Heat team this season.

Denver is still missing Jamal Murray and while Nikola Jokic continues his MVP pace, Michael Porter Jr. has been off to a slow start. MPJ was supposed to fill the scoring void left by Murray but he is averaging below 10 points per game so far. As a consequence, the Nuggets have barely averaged 100 points per game and are 27th in the league in scoring.

Good for them, their defense has been great and that’s what’s kept them afloat. However, the Heat are a much better offensive team than the opponents that the Nuggets have faced so far this year. I still have high hopes for Denver and I won’t discount the possibility that they will finish with a better record than Miami. But right now, the smart money is on a Miami team that is red hot.

The Heat rank 6th in the league in scoring while the Nuggets are 3rd from the bottom in that statistical department. While Denver’s defense has been fantastic this season, it has not been tested against a team with Miami’s firepower and scoring ability.

Meanwhile, the Heat have covered well at home (4-1 ATS) and on the road (3-1 ATS) so this is a team that can win at any stadium.

Bookmakers are predicting a tight game with a narrow two-point spread favoring the Heat and if the oddsmakers are correct, this should be a close contest. If that’s the case, then Miami has a better chance to pull off the win as they are the second-best free-throw shooting team in the league at 82. 5% from the foul line. Denver meanwhile is 6th from the bottom at just 71.7% from the charity stripe.

Having said those, I think that the Heat can win this with their defense alone. Denver is struggling to score points. Miami is going to make them bleed for baskets here behind Butler and Adebayo. On the other end, Herro and Lowry should be able to get them more than enough points to get the victory. But not the cover.

205.5 is such a very low total but this is a Miami team that has held opponents to 103 or fewer points in seven of nine games played. Meanwhile, Denver has failed to score at least 100 points in three out of their last four games. The writing is on the wall.