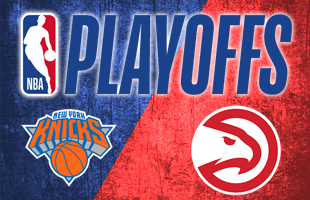 The New York Knicks and Atlanta Hawks look for the crucial Game 3 win on Friday night at the State Farm Arena.

Atlanta took a big halftime lead in Game 2 but with their backs and probably their season against the wall, the Knicks rallied to win the game and tie the series. But with the Hawks winning Game 1, Atlanta has already stolen home-court advantage in the series and will look to take the advantage again. A win in Game 3 will be crucial for both teams as 73% of the teams that won Game 3 went on to win the series.

The first playoff game in Madison Square Garden since 2013 nearly turned disastrous as the Hawks took a 13 points halftime lead in Game 2. But the Knicks rallied behind Derrick Rose and Julius Randle to win the game 101-92 and equalize their series at 1-1.

Rose scored led the Knicks with 26 points while playing a team-high 39 minutes and Randle scored 11 of his 15 points in the crucial 3rd quarter where the Knicks outscored the Hawks by 14 points. Reggie Bullock added 15 points including a pair of clutch three-pointers as the Knicks held off a late rally by the Hawks.

D-Rose hit a basket at the 4:45 mark of the fourth quarter to give the Knicks the lead for good at 93-91. That score opened a 9-0 run for the Knicks that put the game away. New York outrebounded Atlanta 54-41 and dominated the middle with 42 points in the paint against the Hawks’ 28.

The Hawks were 24 minutes from taking a 2-0 lead. Atlanta had New York right where they wanted but then D-Rose took over. Despite the Game 2 defeat, the Hawks got what they came for in New York and that was to steal a win and home-court advantage. Now all they have to do is win all their games at home to clinch the series.

Trae Young had another big game for the Hawks. The newly-identified New York villain scored 30 points after his heroic 32-point effort in Game 1. Bogdan Bogdanovic and De’Andre Hunter added 18 points each but they missed one big shot after another when the Knicks were pulling away. The Hawks were unable to get anything from their bigs as John Collins went scoreless and Clint Capela scoring just four points in the game.

Atlanta struggled from the field, hitting only 31 of 84 total shots for 36.9% while making just 12 out of 44 three-point baskets or 27.3%. They had 12 blocks in the game compared to just two by the Knicks but they were eaten alive off the glass and were outrebounded by a total of 13 boards.

The Hawks had their chances in Game 2. However, they let the Knicks come back and build momentum. Now Atlanta has to take away New York’s confidence back. However, they don’t have the kind of defense to do that. They will have to rely on Trae Young and the offense to get hot and bail them out

New York’s defense shone in Game 2 as they held the Hawks to only 92 points in the game. Given their inexperience, this Knicks team can go to stretches where they will struggle offensively. But for as long as the veterans like Rose and Gibson can step up, New York’s defense is solid enough to win games on the road.

The Knicks are a team that is built for playoff success because they play tough defense. The Hawks should come out strong here since they are at home but in the end, it’s defense that decides playoff games. Give me the better defensive team to pull off the victory.

Other Bets To Make

With the series going to Atlanta, expect the Hawks to come out with a lot of confidence. However, the Knicks are a very good defensive team under Tom Thibodeau, and that defense has proven to be effective on the road. New York is 9-2 in their last 11 games away from the Garden. They have also covered five out of their last six meetings against the Hawks.

I think New York will learn their Game 2 lesson. They won’t fall behind big early in this game and it’s going to be another close game. This has the makings of a classic series and we may have a new rivalry born right here. I expect every game in this series to be well-fought and close. I’ll take the plus points here.

New York played the slowest pace of any team in the league during the regular season. They were also one of the lowest-scoring teams in the league but were successful because they had one of the NBA’s best defenses. The Hawks are a prolific offensive team with Trae Young, Bogdanovic, and Lou Williams able to score points in bunches. However, the Knicks have limited them to an average of 99.5 during the first two games of the series. I think this series will be dictated by New York’s defense and it will have low-scoring games.