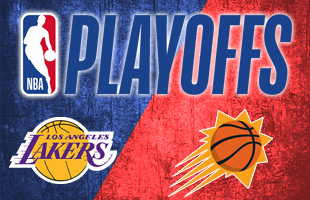 The defending champions Los Angeles Lakers return to the Phoenix Suns Arena for Game 2 of their best-of-seven series against the 2nd seeded Phoenix Suns on Tuesday night.

Phoenix waxed hot during the series opener behind Devin Booker’s 34 points and DeAndre Ayton’s monster double-double of 21 points and 16 rebounds. Los Angeles shot poorly from the floor while Anthony Davis had an off night as the Suns drew first blood by winning Game 1 99-90.

The Los Angeles Lakers opened their title defense bid in the worst way possible. After barely surviving Steph Curry and the Golden State Warriors in the play-in tournament, Los Angeles struggled to shoot the ball in Game 1 and scored their fewest points in any game this season with just 90 points.

LeBron James led the Lakers with 18 points, 7 rebounds, and 10 assists but he committed 5 turnovers. Anthony Davis shot just 5-16 from the field while scoring only 13 points and grabbing 7 rebounds. Andre Drummond had 12 points and 9 boards but Kyle Kuzma, Wesley Matthews, and Talen Horton-Tucker combined for only four total points.

The Lakers made only 43.4% of their field goals, including a paltry 6.9% from behind the three-point area. They also missed 11 out of 28 free throws which would have easily been the game for them. The defending champions were outrebounded by 14 boards and out-assisted by five dimes. The Lakers ranked 2nd in the league in scoring defense during the regular season.

The Suns won their first playoff game in 11 years by beating the Lakers in Game 1. Phoenix’s triumph was keyed by auspicious playoff debuts by Devin Booker and DeAndre Ayton. Chris Paul suffered a right shoulder injury but returned to finish the game and is expected to play in Game 2.

Booker set a franchise record with 34 points in his playoff debut while also grabbing seven rebounds and issuing 8 assists DeAndre Ayton’s 21 points and 16 rebounds on 90% shooting was the first such game since Bill Russell accomplished the feat during the 1965 NBA Finals.

The Suns shot 46.5% from the floor and 32.1% from three-point distance while making 10 out of 12 free throws awarded. Phoenix outrebounded Los Angeles 47-33, thanks mainly to Ayton while also outsourcing the bigger Los Angeles frontline 52-44 in points in the paint. Phoenix ranked in the Top 10 in both scoring and scoring defense during the regular season and was the 3rd best passing team in the league with 26.9 assists per game.

The Lakers had a terrible shooting night in Game 1. Antony Davis had an off game while LeBron James had a poor second half Kyle Kuzma went scoreless while KCP scored just 7 points and shot just 2-9 from the field. I mean everything that could’ve gone wrong went wrong for them in that game.

Phoenix’s first playoff game in over a decade was electric Devin Booker sizzled in his first playoff game while Deandre Ayton owned the paint in also his maiden NBA appearance. With their two young stars hitting their stride, the rest of the Suns rolled along and they beat the Lakers decisively.

Game 1 was an impressive performance by the Suns but it was just one game. The Lakers have too much experience not to bounce back in Game 2. Anthony Davis took the blame for the loss and promised to redeem himself in the next game. I’ll take AD’s word and eat the chalk.

It’s hard to imagine LeBron and AD combining to shoot 11-29 from the field on back-to-back games, especially with their season probably on the line here. Davis shot just 5-16 from the floor and finished with 13 points and 7 rebounds in 39 minutes of action. The Lakers aren’t the best three-point shooting team in the league but 7-29 from deep was terrible.

Chris Paul didn’t look the same after returning from the locker room. Of course, he will say that he’s 100% and ready to go but you can’t be too sure about that. Devin Booker could stay hot as he’s a terrific shooter but if Davis shows up, it’s hard to imagine Ayton producing the same numbers while trying to contain AD.

Oddsmakers still favor the Lakers in Game 2 so there’s gotta be something there. I don’t think we’ve seen the last of these Lakers. They have historically played well against the Suns. Take the defending champions to cover the spread and win Game 2.

Head to head, the total has gone over in nine out of the last 14 games played in Phoenix.

These teams combined for only 189 points in Game 1. However, Los Angeles’ 90-point performance was their first time to score below 100 points in their last seven games. Meanwhile, the Suns averaged 115.3 points per game during the regular season and Devin Booker is a walking bucket.

Los Angeles and Phoenix are both excellent defensive teams but 208 points are too low for these teams and might be an insult to their offensive capabilities. I know this is the postseason but we have too many good scorers on both sides. Anthony Davis bounces back and helps the teams hit the over.