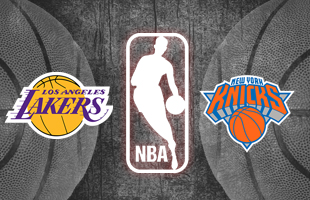 The Los Angeles Lakers head to the Big Apple to take on the New York Knicks at the Madison Square Garden on Tuesday night.

Los Angeles is coming off a hard-earned 121-116 win over the Detroit Pistons in a game where they lost LeBron James to an ejection after throwing a blatant elbow on Isaia Stewart. James earned a one-game suspension because of his actions and will be out for only the second time in his career due to suspension. The Lakers are 9-9 on the season and are in 4th place in the Pacific Division team standings and 9th in the Western Conference.

New York lost to the Chicago Bulls on Sunday. The Knicks are just 4-7 in their last 11 games and have dropped to 9-8 on the season after a strong start. New York is currently in third place in the Atlantic Division and is tied for 8th place in the Eastern Conference. Center Mitchell Robinson has been placed on the concussion protocol while veteran big man Taj Gibson is expected to miss his second straight game with a groin injury.

The Lakers avoided another disaster when they came from behind to defeat the Detroit Pistons last Sunday. Los Angeles looked on its way to a fourth straight loss but the team rallied without LeBron James who was ejected in the third quarter for hitting Isaiah Stewart’s face with a blatant elbow. Anthony Davis made the big defensive plays and baskets down the stretch to get the Lakers back to the .500 mark at 9-9.

Los Angeles ranks 5th in scoring at 109.9 points per game this season. They are 8th in passing at 23.9 assists per game and are 13th in rebounding at 45.8 boards grabbed per contest. However, the Lakers are giving up 112.3 points per game which are ranked 28th in the entire NBA.

The Knicks were off to a strong 5-1 start but they are just 4-6 SU in their last 10 games played. New York has averaged only 101.8 points per game and shooting 42.5% from the field during this stretch and their inability to put up points has been the reason for their struggles. The Knicks have scored more than 103 points only once during these six losses and New York scored only 103 against the Bulls on Sunday.

Head to head, the Lakers have won three out of the last four meetings between these two teams.

After a strong start, the Knicks have regressed and are now a middling team in the Eastern Conference. The team has been playing inconsistent basketball as of late and it’s only Julius Randle who has been the team’s lone bright spot, averaging 20.4 points, 10 rebounds, and even 5.1 assists per game.

The Lakers have also struggled as of late and have dropped not only in the team standings but also in the Championship, Western Conference, and Pacific Division odds boards. Although the Lakers snapped their three-game losing skid on Sunday, they had to come from 15 points down to beat the lowly Detroit Pistons.

With LeBron James suspended for one game, the Lakers are going to be without their leader again. Although they have Westbrook and AD, both have not been able to get their teammates playing at the same level as them, something that James does well.

The Knicks are coming off a letdown against the Bulls but in their last 10 games, New York has bounced back to win four times after five different losses and they have only lost two straight games twice this season. Between these two inconsistent teams, I trust the Knicks more.

Both these teams have struggled against the spread this season but at -2.5 points, it’s not asking too much from the Knicks whose last four wins have been by at least five points.

The arrival of Russell Westbrook has sped up the Lakers’ game. Los Angeles is averaging 109.9 points per game this season, 5th highest in the league. The total has gone over 214 points in four out of the Lakers’ last five games played and with L.A. giving up an average of 113.4 points per game this season, 28th in the NBA, they are always a favorite to go over the total.

Meanwhile, the Knicks like to play at a slow pace but in order to beat the Lakers who have the size advantage over them, New York has to speed up the game and match the Lakers’ offensive production. Not only can the Knicks do that, but they also have the firepower to do so.

These teams have combined to score an average of 219.5 points per game in their last 10 head-to-head meetings. The Lakers’ defense has been non-existent this season and if they are to win this game, it would have to be with their offense. The Knicks though should be able to match them. This won’t be a high-scoring game but the total of 214.5 is too low here.