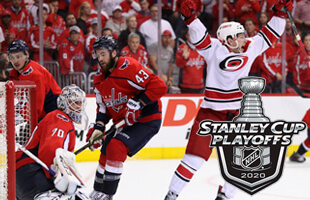 The 2020 Stanley Cup playoffs were supposed to start last April 8 but due to the outbreak of the coronavirus pandemic, the season was suspended. But likes the other pro sports leagues that are on a hiatus, there are talks about the NHL returning to the ice soon.

There is plenty of speculation regarding the 2020 Stanley Cup Playoffs. There are talks of a 24-team playoff when the season resumes. There are also rumors that percentage points will be used as a basis to go straight to the postseason. And then, of course, there is the traditional way of finishing the regular season first before heading to the postseason.

With all the rumors, the betting sites have come up with possible playoff matchups and we have those pairings covered for you. Check them out here:

The Washington Capitals were struggling when the season went to a break. The Capitals were 8-10-2 after the All-Star break and goalie Braden Holtby has a worrying .897 save percentage. This team faced Carolina in the first round of the 2019 playoffs and lost to the Hurricanes.

Carolina ousted the reigning Stanley Cup champions when they met in the playoffs last season. Goalie Petr Mrazek proved that he can beat the Capitals in a playoff series while blueliner Dougie Hamilton, who was a Norris candidate before suffering a fractured left fibula, should be ready to go when the season returns. I think Carolina has Washington’s number here.

These teams were trending in opposite directions when the season was suspended. Philly was rolling with nine wins in their last 10 games while Pittsburgh was reeling with eight losses in their last 11 outings. The break should give the Penguins enough time to regroup and Guentzel could be back in action.

The Penguins’ top goal-scoring option has been out since the calendar year with a shoulder injury but with the season delayed, he could return in the playoffs. The Penguins are a different team when Guentzel is on Crosby’s wing. The battle-tested Pittsburgh team should have the edge over the younger Flyers but this could be a long series.

The Dallas Stars came very close to knocking out the eventual Stanley Cup champions St. Louis Blues in the second round of the playoffs last season and they could be spoilers against the Avalanche again this season.

Colorado has plenty of talent on board but they don’t match-up well against Dallas. The Stars have won their last four meetings against the Avalanche and they have the kind of goal-tending that can shut down Colorado’s Nathan McKinnon and Mikko Rantanen. Ben Bishop has a .929 career save percentage in the playoffs while Pavel Francouz and Phillip Grubauer don’t have the same experience.

The Flames looked lifeless in their first-round playoff matchup against Colorado last season. Star Johnny Gaudreau hasn’t scored a goal in his two playoff appearances while goalie Dave Rittich has no postseason experience.

Edmonton was playing like the dark horse in the Western Conference when the pandemic halted the season. The Oilers have not made the playoffs in the last two seasons and they are itching to get back to the postseason. The last time we saw Conor McDavid and Leon Draisaitl in the playoffs was in 2017 when they masterfully defeated the Sharks in the first round before losing to the Ducks in seven games in round two.

These teams are separated by four points in the team standings but Edmonton has the better goal differential at +8 against -5. They also beat the Flames 8-3 last February. I’m taking Edmonton here.

The Lightning beat the Maple Leafs 7-3 last October but a short-handed Toronto team dusted Tampa Bay in March. But can they beat Tampa Bay in a series? If Toronto gets healthy and Freddie Andersen does a good job goal-tending, I think they have a good shot an upset here.

But Andersen’s goaltending has led the Leafs to lose an estimated eight points in the team standings this season. Because of that, they are a point behind the Lightning in the leaderboard. Toronto will be on the road in this series and they are up against a hungry team that lost in the first round last season. I think it’s possible but I can’t rely too much on the what if’s for Toronto.

The Bruins are the favorites to win the 2020 Presidents’ Trophy and last season they ended the Blue Jackets’ postseason run. Columbus though proved that they can slay the giant when they swept the Lightning in the first round of the 2019 playoffs. Can they beat the NHL’s best team again this year?

Boston is one pace to become the best regular-season team in 2020 and the last time that the winner of the Presidents’ Trophy hoisted the Stanley Cup was in 2013 when the Blackhawks won the lockout-shortened season. But the Bruins are a veteran team that has been through many playoff runs. They are looking to bounce back after last season’s heartbreaking Game 7 loss to the St. Louis Blues.

Two years ago, expectations were high for the Winnipeg Jets. They finished second overall in the team standings behind the Presidents’ Trophy winner Nashville Predators. After getting past the Wild and the Preds, many believed that they would go all the way to the Stanley Cup Finals, but they didn’t.

But the upstart Golden Knights upset them by sweeping Games 2-5. This time, Vegas has the edge as they are the Central Division champions. An interesting fact though is that the Jets swept their 2019-20 season series. However, I think the more consistent team this year takes this.

Last season, the St. Louis Blues fired their head coach and they went on a downward spiral that led to two teammates fighting each other. But they turned things around by going from worst to first in the Western Conference and then they beat the veteran Boston Bruins in seven games to win the Stanley Cup.

The Predators fired their head coach this season and were playing well as of late. Nashville also swept their season series against St. Louis but it’s hard for me to think of an upset here because the Blues didn’t have any distractions this season and they won 10 out of their last 10 games before the season was halted. I think the Blues start their title defense with a win over the Preds in round one.

The Toronto Maple Leafs lost in seven games to the Boston Bruins in three out of their last four postseason appearances. They should be relieved that they didn’t draw the Bruins here. It’s been 16 years since Toronto advanced to the second round and they are very hungry.

Tampa Bay had its share of early-season woes before Jon Cooper fixed the team. However, the Maple Leafs still beat them two times after the fix. I still think that Tampa Bay has the better team here but given the betting value and their season series, I’ll take the risk and the plus money.