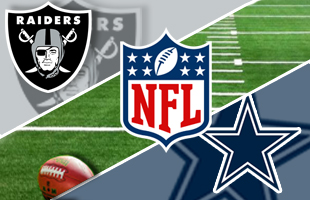 The Las Vegas Raiders will travel to the AT&T Stadium to face on the Dallas Cowboys on Thursday in the annual Thanksgiving game.

Las Vegas has dropped three in a row, losing to the New York Giants, Kansas City Chiefs, and Cincinnati Bengals in their last assignments. After starting the season with a 3-0 record, the Raiders have dropped to 5-5 and they are currently down in third place in the AFC West team standings.

Dallas is 7-3 on the season and has the best record in the NFC East. However, the Cowboys are coming off a 19-9 loss to the Kansas City Chiefs last weekend, their second loss in their last three games. The Cowboys lost their opening game of the season to the Bucs but won six in a row before this 1-2 stretch.

The Cowboys have won four out of the last seven head-to-head meetings between these two teams. However, their last meeting happened on December 17, 2017, or nearly four years ago in a game which the Cowboys won 20-17.

The Raiders have been on a slide with three consecutive defeats. In their last game, Las Vegas dropped a 32-13 game against the Cincinnati Bengals as +2.5 point underdogs. Derek Carr threw for 215 yards with 1 TD and 1 INT but the Raiders’ rushing game only 72 total rushing yards with 37 of those coming from Josh Jacobs. They also lost the battle of first downs 22-13 and only had 22:40 of the total possession time.

Carr hasn’t really played that bad during their losing streak but he has thrown five picks in his last four games. He has passed above the 300-yard mark five times this season and has a total of 3,041 yards with 16 TD and 9 INT on the season. Josh Jacobs is the leading rusher but he only has a total of 333 rushing yards on the season and just 129 rushing yards in his last three games. Darren Waller leads the Raiders with 610 receiving yards.

The Cowboys have lost two out of their last three games. Most recently, Dallas lost to the Kansas City Chiefs 19-9 as 2.5 point underdogs at Arrowhead Stadium. Dak Prescott threw for 216 yards but had two INT and zero TD. The Cowboys were outgained 370 to 276 and lost the battle of fist downs 22 to 16. Dallas also only has 82 rushing yards with Ezekiel Elliott playing through an injury.

Prescott is having a great year and is the leading candidate to win Comeback Player of the Year. However, he wasn’t at his best the last time out. For the season though, Prescott has thrown for 2,557 passing yards with 20 touchdowns and only seven interceptions, including two last week. Ezekiel Elliott has rushed for 695 yards while Tony Pollard is averaging 5.5 yards per carry. Top receiver CeeDee Lamb has been placed in the concussion protocol while Amari Cooper is on the COVID-19 injury list.

Both these teams are coming off bad losses in week 11 and have to regroup quickly on a short week. These are two playoff contenders so we should expect both to come up with a better effort here.

The Cowboys will be without Amari Cooper and CeeDee Lamb, two key players. However, the Cowboys’ offense should still have more than enough to beat the Raiders on offense. If you don’t agree that Dallas will be fine without Cooper and Lamb plus a potentially compromised Ezekiel Elliott who is playing through injury, there is still the Dallas defense.

Dallas is in the Top 10 in points allowed while they are 5th in takeaways with 17. If the Cowboys show up on this side of the field, the absences won’t really matter and the Cowboys should pull off a convincing win over the struggling Raiders.

Dallas is coming off a disappointing loss to Kansas City but despite the loss, their defense played well, allowing only 19 points against Mahomes and the Chiefs. Overall, the Cowboys are 8th in scoring defense at 21.4 points per game. That defense is going to be a problem for a Las Vegas team that is having trouble scoring points.

The Raiders are averaging just 22.3 points per game 18th overall in the league. They have scored 16,14, and 13 points in their last three games, all losses for the Raiders. Meanwhile, the Las Vegas defense is conceding 26.2 points per game, 26th in the league, and is facing one of the best scoring teams in the NFL. I like the Cowboys to cover.

This is a game that should feature plenty of scoring. Everyone knows that the Raiders are capable of scoring big. They scored more than 30 points against the Ravens, Dolphins, Broncos, and Eagles.

Dallas meanwhile is only the 3rd highest-scoring team in the NFL. They have scored at least 35 points in five out of their last eight games, including 40+ points three times. The over is also 8-3 in Dallas’ last 11 as home favorites. And then there is the Las Vegas defense, or the lack thereof.

Las Vegas’ rush defense ranks 29th in the NFL. They are also ranked 26th in scoring defense. The Raiders have surrendered 41 and 32 points respectively in their last two games. Then there is also the fact that the Eagles don’t run much and Carr will attempt a lot of passes.

This one has the makings of a shootout and these teams won’t disappoint. I like these teams to hit the over.