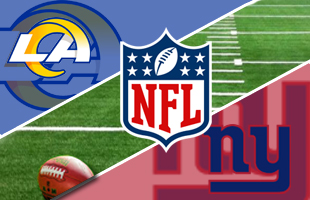 The Los Angeles Rams head to the MetLife Stadium to take on the New York Giants on Sunday, October 17, 2021.

Los Angeles is 4-1 on the season and they are 2nd in the NFC West division standings, behind only the undefeated Arizona Cardinals who are 5-0. The Rams defeated the Seattle Seahawks 26-17 last weekend in a good bounce-back win after losing to Arizona in Week 4. Los Angeles has looked like one of the league’s elite teams right now and they play great both on offense and defense.

Meanwhile, the Giants are among the bottom teams once again this season. New York is 1-4 SU and 2-3 ATS after five weeks of the 2021 NFL season. The Giants are coming off a 44-20 loss to the Dallas Cowboys in a game where they lost Kenny Golladay, Saquon Barkley, and Daniel Jones to injuries. Golladay and Barkley have been ruled out for this game, giving the Rams a big advantage.

The Rams have looked impressive under quarterback Matthew Stafford and it looks clear right now that it was Jared Goff that was holding back this team from finding success. With Stafford at the helm, Cooper Kupp is having his best start ever while Robert Woods has gotten going as of late, including 12 catches for 150 yards against Seattle.

Stafford completed 25 of 37 passes for 365 yards with one touchdown and one interception last Friday. He has passed for a total of 1,587 passing yards with 12 TDs and only 3 interceptions after five games. Darrell Henderson leads the Rams’ rushing attack and he has rushed for over 80 yards in their last two games. Henderson should have a good night against the 6th worst rush defense in the league in the Giants.

The Giants have struggled off the gates and look to struggle even more after losing Kenny Golladay to a knee injury and Saquon Barkley to an ankle injury. Even quarterback Daniel Jones left their last game with a concussion and both Barkley and Golladay are out for this game with Jones currently listed as questionable. If Jones is a no-go here, then the Giants will go to Mike Glennon to lead the offense, which may not be a good thing against a defense led by Aaron Donald.

Glennon took over from Jones last weekend and he finished with 196 passing yards with one touchdown and two interceptions while completing 16-25 passes. The injured Golladay was New York’s leading receiver with 17 catches for 282 yards while Jones was their top rusher at 197 yards on 30 carries with two rush TD scored. The Giants have the 7th worst scoring defense in the league, allowing 27.8 points per game this season.

Please Note
Los Angeles bounced back well after losing to the Cardinals by beating the Seahawks. Rams head coach Sean McVay is known to be an aggressive type and he doesn’t let his team take their foot off the gas pedal. I expect the Rams to display their explosive offense and elite defense here.

Meanwhile, the Giants weren’t just blown out by the Dallas Cowboys, they lost key offensive players due to injury. Saquon Barkley and Kadarius Toney suffered ankle injuries while Kenny Golladay went down with a knee injury and Daniel Jones suffered a concussion Barkley and Golladay are out for this game while Jones, Toney, and wideout Starling Shepard are still questionable.

Not only are the Rams the much better team between these two, but they are also the healthier team. Without several key offensive players, the Giants are at a huge disadvantage here.

The Rams defense ranks 12th in scoring defense, allowing only 23.2 points per game. Imagine what the Giants can produce without at least Golladay and Barkley, and a possibly compromised Jones.

Offensively, Los Angeles ranks second in passing yards per game at 310.2 and they are scoring an average of 28.2 points per contest while converting 48.2% of their third-down attempts. I’m not sure if the Giants’ defense can get to Stafford and if that is indeed correct, the Los Angeles offense will pile up the points and cover the spread. The road team has covered in each of the last four meetings between these two teams.

As stated above, there are no issues with the Rams offense heading to this game so they should be able to do what they do week in and out. On the other hand, the Giants’ offense was already subpar when they were complete. Now, what more when they are without key players on offense?

The Giants are averaging 20.8 points per game and 284.8 passing yards per game with Daniel Jones playing behind center. Now if he isn’t 100%, that will be a big problem, especially with Aaron Donald on the other side of the ball. I think New York will be lucky to score two touchdowns in this game. Having said that, I think the total is going to come up short by a field goal or so.