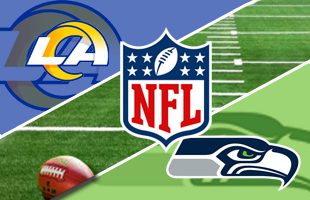 The Los Angeles Rams head to the Lumen Field to take on the Seattle Seahawks in the Week 5 edition of Thursday Night Football.

Los Angeles is coming off its first defeat of the season, a 37-20 loss to the Arizona Cardinals in a game where they were four-point betting favorites. The Rams are 3-1 on the season and they are currently second in the NFC West, behind the 4-0 Cardinals. Prior to last week’s loss, Los Angeles dealt Tom Brady and the defending Super Bowl Champions Tampa Bay Buccaneers their first loss of the season.

On the other hand, the Seahawks bounced back from their loss to the Tennessee Titans by defeating the San Francisco 49ers 28-21 as 2.5 point betting underdogs. Seattle is 2-2 on the season and they are currently behind the Rams in the NFC West standings and tied with the 49ers. The Seahawks won their opening game against the Chargers before losing two straight games.

The Rams failed to build on their upset win over the Tampa Bay Buccaneers in Week 3 as they fell to the Arizona Cardinals in the battle for the lead in the NFC West. Now they have to regroup and bounce back on a short week.

The Seahawks snapped a two-game losing streak by defeating the San Francisco 49ers on the road to improve to 2-2 on the season. The Seahawks are now tied with the 49ers at the bottom of the NFC West division team standings and will try to pull even with the Rams with a win here.

Russell Wilson has passed for 1,044 yards with nine touchdowns and zero interceptions while completing 70 out of 109 passes. Chis Carson has rushed for a team-high 232 yards on 54 carries while Tyler Lockett and D.K. Metcalf each has 20 catches on the season. Lockett has 333 yards and 3 TD while Metcalf has 285 yards and 3 TD for the Seahawks.

Head to head, the Rams are 6-2 SU in their last eight games played against the Seahawks.

Seattle’s defense has had its issues to start the season. The Seahawks are ranked 28th in passing defense and are dead-last against the run, allowing their opponents 152 rushing yards per contest.

Meanwhile, the Rams are coming off their first loss of the season and although their defense has not looked as good as it was last year, their passing game has tremendously improved with Stafford. Although he didn’t have a big game the last time out, he had three before Week 4.

With Los Angeles facing a struggling defense, I expect the Rams to bounce back and pick up this road win.

Head to head, the Rams are 4-1 ATS in their last five games against the Seahawks.

The Rams defense has looked bad in the last two weeks, allowing a total of 61 points and 911 yards. After forcing the Cardinals to punt on their first possession last week, they allowed Arizona to score in seven out of their next eight drives.

Given Seattle’s defensive issues, I’ll lay the points and take the Rams and this soft line.

The Rams passing offense is ranked 5th in the league and that helps them score an average of 28.8 points per game this season. Against a struggling Seattle defense, they shouldn’t have much problem moving the ball and scoring points.

Seattle is also a very good passing team with Russell Wilson and they are averaging 25.8 points per game this season. With how shaky the Rams’ defense has been during the previous two weeks, Wilson should be able to find holes and help the Seahawks keep up with Stafford and the Rams.

It could be a back-and-forth game but there’s no doubt it should be high-scoring.