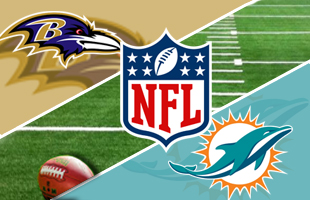 The Baltimore Ravens are on the road as they travel to South Beach to take on the Miami Dolphins at the Hard Rock Stadium in this week’s edition of Thursday Night Football.

Baltimore is coming off a 34-31 win over the Minnesota Vikings in a game where they had to come back from a two-touchdown deficit to force overtime where they won the game with a field goal. The Ravens have lost just once in their last seven games and at 6-2, they are on top of the AFC North division standings.

Miami snapped their seven-game losing streak by defeating the woeful Houston Texans 17-9 as four-point home favorites. The Dolphins won the game despite rushing for only 47 yards on 25 carries and while committing five turnovers. Miami is 2-7 SU on the season and they are in fourth place in the AFC East division team ladder.

Baltimore leads their all-time series 8-6 and has won the last three head-to-head meetings, including a 49-point victory in their most recent meeting on September 8, 2019.

Baltimore trailed 24-10 early in the second half before rallying to beat the Vikings. The Ravens outgained the Vikings 500-318 while picking up 36 first downs and allowing three. They dominated the possession time at 46:04 to 23:40. Baltimore moved the ball 72 yards in their second drive of overtime and set up the game-winning field goal from 36-yards out with 16 seconds left to play.

Lamar Jackson threw for 266 yards on 27-41 passing with 3 touchdowns and two interceptions while also rushing for 120 yards. Devonta Freeman rushed for 79 yards on 13 carries while Marquise Brown caught nine passes for 116 receiving yards.

Miami led from start to finish against the Texans last week. The Fins took a 7-0 lead at the end of the first quarter and increased their margin to 17-6 at the half. They allowed Houston only a field goal in the second half to preserve a 17-9 win, their second win of the season. The Dolphins won the game despite being outgained 262-272. Miami however had 22 first downs while allowing the Texans just 14.

Jacoby Brissett completed 26 of 43 passes for 244 yards with one touchdown and two interceptions. Myles Gaskin rushed for 34 yards on 20 carries while Jaylen Waddle had eight catches for 83 receiving yards.

Miami is coming off a win but a one-score victory over the woeful Texans team isn’t too inspiring The Dolphins turned the ball five times last week but still won the game and that shows how bad Houston has been.

Baltimore is no Houston, not by a mile. The Ravens have lost just once in their last seven games and even and against the Vikings last week, they rallied from 14 points down to steal the game 34-31 so this is a very resilient team.

The Ravens are a team that plays with a lot of pride and with a lot to play for, expect them to be at their best.

Baltimore loves to beat up lowly teams such as these Dolphins. The Ravens are 15-1 SU against sub .500 teams and have beaten those opponents by an average winning margin of 16.9 points per game.

Miami could carry some momentum on a short week. But even then, their win was an ugly one as they committed five turnovers and had three fumbles. The Dolphins also went scoreless in the second half against the Texans.

Against Baltimore, the Dolphins cannot afford the luxuries they had against Houston. This is a Ravens team that is playing to win games and is highly motivated to beat them.

Miami’s offense has been terrible this season. The Dolphins have been held down to 20 or fewer points in five out of its last six games and seven out of their nine overall games played this season. Miami is also the worst rushing team in the league and they rushed for only 47 yards on 25 attempts last week.

The Dolphins also committed five turnovers including three fumbles against the Texans but still won the game. They can’t afford those mistakes against an impressive Baltimore team. The Ravens’ defense should be able to limit the Dolphins offense while Lamar and the offense will take care of business. However, it won’t be a high-scoring game, not with the way the Miami offense has faltered.