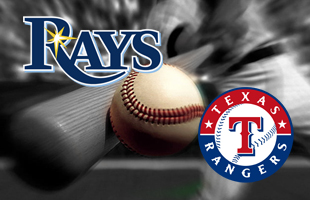 The Tampa Bay Rays and Texas Rangers meet up at Globe Life Field for Game 3 of their four-game set. The teams were still playing Game 2 as of this writing.

Entering Tuesday’s Game 3, the Rays are 28-20 on the season and in second place in the AL East, 5.5 games behind the division-leading New York Yankees. Tampa Bay is 5-5 in its last 10 games played and lost Game 1 via a score of 5-9. The Rays are 11-9 when playing on the road this season.

The Rangers are 23-24 on the season and in third place in the AL West, 7 games behind the Houston Astros who are on top of their division. Texas is 6-4 in their last 10 games played and as stated earlier, they beat the Rays 9-5 in Game 1. The Rangers are 11-12 in 23 home games played this season.

Tampa Bay is averaging 4.2 runs per game which are 17th in the league. They have earned 192 RBIs and 376 base knocks on the year. The Rays are batting at .235 as a team this season and have scored a total of 203 runs with a team OBP of .298. They have a slugging percentage of .383 and have been called out on strikes in 411 instances while getting walked 135 times.

Kevin Kiermaier leads Tampa Bay with six home runs of the season while also producing 15 RBIs. Meanwhile, Manuel Margot leads the team with 23 RBIs while also delivering three home runs. Wander Franco is the team’s best hitter at .270 while also owning an OBP of .305 and SLG of .421

Jeffrey Springs will open on top of the mound for the Rays. The 29-year-old left-hander from Belmont, NC has been very reliable since moving to the Tampa Bay rotation. In five games started, Springs has posted a 2-2 record with an ERA of 1.62 and a WHIP of 0.81 in over 33.1 innings pitched. He has conceded 6 runs on 20 hits with 33 strikeouts and seven walks.

Springs took a loss in his most recent start but he limited the Yankees to a pair of runs on five hits with no walks in six innings of work. New York beat Tampa Bay 2-0 in that game and the Rays are 3-2 in his last five starts.

Texas is conceding an average of 4.3 runs per nine innings. Their pitching staff has surrendered a total of 198 runs, including 182 earned runs this season, and has an aggregate ERA of 3.95. They also have a team WHIP of 1.306 and a FIP of 4.10. The Rangers pitching staff has generated a total of 400 strikeouts versus 169 walks.

Corey Seager leads the Rangers with 11 home runs and also has a total of 24 RBIs on the season. Adonis Garcia is the team leader in RBIs with 31 while also producing 8 home runs. Kole Calhoun is the team’s best hitter at .265 while also having an OBP of .314 and SLG of .463.

Gray gave up five earned runs on five hits and three walks against the A’s last Friday. He did not factor in the decision in the 8-5 win for the Rangers. Texas is 3-2 in Gray’s last five starts of the season.

The Tampa Bay Rays are:

The Texas Rangers are:

The Rays are a team that usually wins games that they are supposed to and this is one of those games. On Wednesday, they shouldn’t have any major issues against a starter in Jon Gray who has been underwhelming this season.

Gray has an ERA of 5.56 and a WHIP of 1.32 this season. Those numbers drop to 6.35 and 1.59 when pitching at home. He was touched up for five earned runs on five hits and three walks against Oakland last Friday. While it was a no-decision for him his team is just 3-4 in his last seven starts.

Tampa Bay has not been a very productive team on offense this season but against Gray, they should be able to score more than enough runs to win the game.

Prediction: Tampa Bay Rays. If you are brave enough, you can even go with the Rays at -1.5 at the run line for a better price of +135.

The total has gone over in three out of the last five meetings between these two teams with one push.

Jeffrey Springs has been throwing well since recently moving into the starting rotation. Flying under the radar, Springs is arguably one of the best pitchers in baseball at this stage of the season. He has an ERA of 1.62 and a WHIP of 0.81 in a 33.1 innings of work. The Rays also have one of the top bullpens in baseball, ranking 9th overall in bullpen ERA at 3.34.

While I expect the Rays to score multiple runs against Gray, the Rangers won’t help them get the score to go over the betting total. With Springs and the relievers doing their jobs here, Texas’ scoring opportunities will be limited.