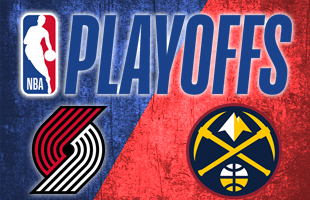 The Portland Trail Blazers visit the Denver Nuggets for Game 5 of their first round playoff series.

The teams are tied at two games apiece after the Blazers blew out the Nuggets in Game 4 at Portland. The Nuggets had taken command of the series with back-to-back wins in Games 2 and 3 after losing Game 1. But instead of crumbling under pressure, the Blazers are right back in the series and are looking to get a crucial Game 5 win.

The Portland Trail Blazers roared back to life after getting blown out in Game 2 and losing at home in Game 3. Norman Powell stepped up big time with 29 points in a game where Damian Lillard struggled mightily with just 10 points on 1-10 shooting.

C.J. McCollum added 21 points while Jusuf Nurkic added 17 points and 6 rebounds for the Blazers. Coach Terry Stotts played 14 of his players in Game 4 and 12 of them scored at least two points to help the team.

Portland took 10 shots fewer than Denver in Game 3 but made 50% of their attempts. The Blazers also had a 46-38 advantage in points in the paint while outrebounding the Nuggets 40-33 on the defensive end of the court. They outscored Denver by 17 points in the third quarter to put the game away.

The Denver Nuggets looked like they had taken command of the series after a 19-point win in Game 2 and a road win in Portland in Game 3. But the Nuggets “played soft” according to head coach Michael Malone and they got ran off the building with a 20-point Game 4 defeat which has tied the series at 2 wins apiece.

After three big games, Nikola Jokic struggled in Game 4, shooting just 7-18 from the field and finishing with 16 points. Facu Campazzo was the only other starter to score in double figures with 12 while Michael Porter Jr. scored just three points on three shots and Aaron Gordon contributing only six points on 2-7 shooting.

Denver made only 32 of 94 shots or 34.0% and they also made only 29% of their three-point attempts. The Nuggets had 10 more offensive rebounds than the Blazers but that was the only statistical advantage they had in a game where they never took the lead.

The Blazers produced the most decisive win of the series in Game 4 and they were able to do it with Damian Lillard scoring only 10 points on 1-10 shooting. We haven’t seen Dame Time struggle in consecutive games so there’s a good chance he bounces back with another classic Lillard playoff performance.

Denver is beginning to feel Murray’s absence. While Porter stepped up for them during the regular season, he has been inconsistent in this series, averaging just 15.3 points on 43.6% field goal shooting and 38.3% from deep which are below his regular season percentages. Without a consistent sidekick, Jokic has carried too much load for Denver and he showed signs of slowing down in Game 4.

Please Note
This should be a close game and both teams can win it. I won’t blame you if you pick the Nuggets but I like how the Blazers are peaking at the right time. Lillard and McCollum are still their primary options but the likes of Norman Powell and Carmelo Anthony have provided the much-needed bench support.

In a game that could go down to the final possessions of the game, I will pick the team that has more players who can close out games. Sorry, Joker but it’s not Denver. Give me the Portland Trail Blazers to pull off the upset again.

Other Bets To Make

This series has gone back and forth as both these teams are evenly matched with neither having a significant edge over the other. That’s the reason for the marginal +2 which makes this pretty much a pick ‘em game.

However, it looks like it’s the Blazers who are peaking at the right time. They are 14-2 ATS in their last 16 games overall. Portland also has scored more points in their series, they have scored more points off the bench, and have limited their turnovers in the first four games of the series.

Denver got a shot in the arm when Austin Rivers went hot in the 4th quarter of Game 3. Had it not been for that explosion, the Blazers could’ve been looking to close out the series here. Anyways, this should be a well-fought contest and I have more faith in Portland’s closers than a Denver team that has relied heavily on Nikola Jokic in the playoffs.

Head to head the total has gone over in four out of the last five meetings between these two teams. The over is also 4-1 in their last five games played in Denver.

Both teams ranked in the lower half of the league in terms of pace but during the playoffs, these teams have knocked down their three-pointers, helping the total get to the over in the first three games. Game 4 was an exception because it was a blowout and the main cast for both teams were on the bench during the 4th period. These teams combined to score 210 in Game 4 with Lillard scoring just 10 points on 1-10 shooting. Lillard bounces back with a strong game and helps push the score above the total.