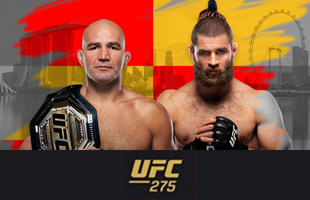 The highly anticipated rematch between former UFC women’s strawweight champions Joanna Jedrzejczyk and Zhang Weil will be the third fight of the evening. Rogerio Bontorin takes on Manel Kape while Jack Della Maddalena takes on Ramzan Emeev in the curtain-raiser of the main event.

Before those main card bouts however is an intriguing list of prelims bouts which we will preview in this article. Let’s take a look at those bouts and make our predictions.

Brendan Allen is the former Legacy FC middleweight champion. The 26-year-old from Beaufort, South Carolina began his career at WFC, Valor Fights, and Legacy FC. He joined the Contender Series 2019 where he submitted Aaron Jeffries to earn his UFC contract. Allen won his first three UFC bouts but has gone 3-2 in his last five bouts including a submission of Sam Alvey in his last bout.

Allen is 18-5 with five knockouts and 10 submission victories. He is 6-2 tall with a reach of 75 inches and fights out of the orthodox stance.

Jacob Malkoun is a former pro boxer who won a gold medal in the Asian ADCC competition. The 26-year-old from Sydney, Australia opened his career in his native land and fought under promotions like Brace, Hex Fight Series, and WLF before joining the UFC in 2020. After losing to Phil Hawes in his UFC debut, Malkoun has won back-to-back bouts against Abdul Razak Alhassan and AJ Dobson.

Malkoun is 6-1 with two knockouts. He is 5-9 tall with a reach of 73 inches and fights out of the orthodox stance.

Malkoun has not lived up to his potential in the UFC. His boxing has not been a factor in his fights and he’s he has been content to use his high-level grappling game to hold down his opponents to the mat rather than chase after submissions. While that kind of approach could work against less quality fighters, I don’t think it will be enough to beat seasoned and versatile veterans like Allen.

Allen has the edge in height and reach and we’ve seen Malkoun struggle with his opponents’ length in the UFC. Allen is also a tough fighter to hold down which makes it tough for Malkoun to win this bout with his grinding game. Allen should win the striking battle with his length and he should be able to keep up with Malkoun in the grappling game.

Seung Woo Choi was a former Top Fighting Championship featherweight champion. The 29-year-old from Gangneung, South Korea is also a former bronze medalist at the World Muay Thai Championships. He joined the UFC in 2019 and after losing his first two UFC assignments, he has lost just once in his last four bouts. That loss came in the form of a submission defeat against Alex Caceres in his most recent bout last October 23, 2021.

Choi is 10-4 with six knockouts. He is an orthodox fighter who stands six feet tall and has a reach of 74 inches.

Josh Culibao is a former featherweight champion at HEX Fight Series, Diamondback FC, and Super Fight MMA. The 28-year-old from New South Wales in Sydney, Australia joined the UFC in 2020 and is 1-1 with one draw in three UFC bouts. In his last fight, Culibao picked up his first UFC win, defeating Shayilan Nuerdanbieke last May 22, 2021.

Culibao is 9-1 with five knockouts. He stands 5-10 tall with a reach of 73 inches and is an orthodox fighter.

Choi winning three in a row after dropping his first two UFC bouts showed how much he’s improved since coming over to the promotion. Despite that, there are still plenty of kinks in his armor: he tends to head-hunt too much, doesn’t have a variety of combinations, and his submission defense is still not holding up too well.

Fortunately for him, Culibao isn’t the kind of opponent who is well-equipped to exploit those weaknesses. Choi’s advantage in height and reach will also be a problem for Culibao on the feet and if Culibao couldn’t take down Jourdain makes me think that Choi will keep this fight on the feet where he will be able to outwork Culibao with his striking. Give me Choi to win a fight that will be mostly fought on the feet.

Andre Fialho is a former champion at UAE Warriors who also fought under PFL, Bellator MMA, and LFA. The 28-year-old from Cascais, Portugal joined the UFC this year and lost to Michel Pereira in his UFC debut. He has won his last two bouts against Miguel Baeza and Cameron VanCamp both via first-round TKO.

Fialho is 16-4 with 13 knockouts and one submission victory. He is six feet tall with a reach of 74 inches and is an orthodox fighter.

Jake Matthews began his fighting career at Shamrock Events in Melbourne, Australia. The 27-year-old for Victoria joined the UFC in 2014 and won five out of his first six UFC bouts. Matthews then lost back-to-back bouts to Kevin Lee and Andrew Holbrook before winning six out of his last eight bouts. He is, however, coming off a loss to Sean Brady at UFC 259.

Matthews is 17-5 with four knockouts and seven submission wins. He is 5-11 tall with a reach of 73 inches and is an orthodox fighter.

Matthews has an impressive top game and Fialho has not shown that he can defend high-level takedowns and hasn’t been impressive working off his back. However, Fialho has the knockout power which may be enough to win the battle on the feet despite Matthews’ noticeable improvement in that department.

Fialho hasn’t grappled much in his recent bouts but when he has, he has looked okay, even if it wasn’t that good. The thing is, he has what he needs to take the fight back to the feet when he is taken down. I don’t think he will need that, however. Matthews doesn’t have the best striking defense and he’s vulnerable, especially to the left hook. I think Fialho clips Matthews early and ends this bout in the first round.

Kyung Ho Kang is a former ROAD FC bantamweight champion and bantamweight tournament winner. The 34-year-old from Busan, Korea is a Go! Super Korean season three winner. After losing his first two bouts, he is 6-2 in his last eight bouts but is coming off a unanimous decision loss to Rani Yahya.

He is 17-9 with two knockouts and 11 submission victories. He is 6-0 tall with a reach of 74 inches and is an orthodox fighter.

Danaa Batgerel is a former MGL-1 featherweight champion. The 32-year-old from Mongolia fought at Legend FC and Chin Woo Men before joining the UFC in 2019. He lost to Alateng Heili in his UFC debut but has won three out of his last four bouts. Batgerel is coming off a loss to Chris Gutierez last March.

Batgerel is 12-3 with 8 knockouts and two submission victories. He is 5-10 tall with a reach of 73 inches and fights out of the orthodox stance.

Kang is an impressive grappler with very good tools to be an elite fighter in the division. However, he hasn’t been aggressive enough in his bouts and that has resulted in nearly half of his UF bouts ending in split decision defeats. And it’s not that those were difficult fights, those were bouts that he could have realistically won.

Danaa is a knockout artist however if he does not find the KO early, his lack of striking technique is exposed. He also struggled with his wrestling in his UFC debut and considering that we haven’t seen Kang getting stopped in a long time, I think he survives the early barrage and dominates the rest of the fight with a dominating top game.

La Niang began her career at Dacheng Wuyi, WLF, Bellator, and Kunlun Fight. The 25-year-old from China joined the UFC last year and lost to Ariane Carnelossi in her UFC debut.

She is 19-5 with two knockouts and two submission victories. Na Liang is 5-5 tall with a reach of 67 inches and fights out of the orthodox stance.

Silvana Gomez Juarez is a veteran who fought at Real Fights, ULLAM, XFCI, Combate Americas, UWC Mexico, and Lux Fight League. The 37-year-old from Argentina joined the UFC last year and is 0-2 in two bouts with losses to Lupita Godinez and Vanessa Demopoulos.

Gomez is 10-4 with six knockouts and two submission victories. He is an orthodox fighter who stands 5-3 tall with a reach of 65 inches.

All Gomez has to do to win this fight is to keep in on the feet where she can let her power punches do the damage. However, that is easier said than done again Na Liang is an excellent submission artist and has a better take-down game than opponents who have given Gomez trouble.

Na Liang also has a significant advantage in height and reach which should make it difficult for Gomez to impose her strength on the feet. With Gomez aggressive here, she will leave openings for Na Liang to get hold of her and take the fight to the ground where she will work her way to submission. We’ve seen Gomez get arm-barred several times before. We should see it again here versus an armbar specialist.

Ramona Pascual began her career at IMPI, Road FC, Invicta FC, and iKon Fighting Federation before joining the UFC this year. She lost to Josiane Nunes in her promotional debut last February 26th.

Pascual is 6-3 with four knockouts and one submission win. She is a southpaw who is 5-7 tall with a reach of 66 inches.

Joselyne Edwards is a former Ultimate Combat Challenge and KOTC bantamweight champion. The 26-year-old from Panama City, Panama joined the UFC in 2021. She defeated Wu Yanan in her first UFC bout but has since dropped back-to-back bouts to Karol Rosa and Jessica-Rose Clark.

Edwards is 10-4 with five knockouts and three submission victories. She is 5-8 tall with a reach of 70 inches and is an orthodox fighter.

Pascual’s all-out offensive style is fun to watch but it will be anything but that here. Her deficiencies in cardio and grappling suggest that she will struggle against an opponent like Joselyne Edwards who is faster and has better technique on the feet.

Lately, Pascual has displayed some offensive wrestling skills that she could use against an opponent who’s struggled with it in some of her matches. However, Pascual’s tendency to slow down after the first round gives Edwards the edge in the last two rounds. Pascual starts fast but Edwards finishes stronger and gets the unanimous decision.