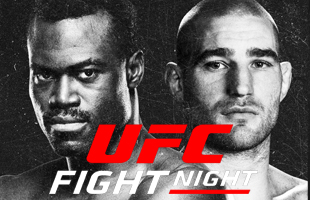 Middleweights take center stage this Saturday, July 31, 2021, as TUF veteran Uriah Hall takes on Sean Strickland in the headliner of UFC Vegas 33 which will be held at the UFC’s APEX Facility in Las Vegas, Nevada.

Meanwhile, Chris Daukaus will welcome back Shamil Abdurakhimov to the Octagon in the co-main event of the evening. TUF alumni Gloria de Paula and Cheyanne Buys will aim to bounce back from their respective unsuccessful UFC debuts by fighting each other in the main card.

But before these big fights, an interesting prelims undercard will precede the show. Filled with newcomers and veterans looking to break through, here are our predictions for the bouts.

Nicco Montano is the inaugural UFC women’s flyweight champion. The 32-year old from Lukachukai, Arizona also fought for KOTC and HD MMA where she also won the flyweight titles in both promotions. Montano has not fought since losing to Juliana Pena on July 13, 2019.

She has a record of 4-3 with two knockouts. Montano is a southpaw fighter who stands 5-5 tall with a reach of 65 inches.

Wu Yanan fought under the Chinese Kung Fu Championships and WLF W.A.R.S before joining the UFC in 2017. But since joining the UFC, she has fought just four times in four years. Wu is 1-3 inside the Octagon and has lost her last two bouts.

Wu has a record of 11-4 with seven knockouts and two wins via submission. She is 5-8 tall with a reach of 66 inches and fights out of the orthodox stance.

Montano’s too good of a grappler for Wu to handle. If she can still wrestle as she did against Juliana Pena, I think that should be enough to win this fight. However, Montano has been through a lot- COVID-19, injuries, and also ring rust. With Wu Yanan’s pure aggression, Montano may no longer be able to withstand the pace and grind.

This fight will go down to what is left in Montano’s tank. Wu has been underwhelming in the UFC and I don’t think she can handle Montano on the mat. Montano is too good a grappler to lose this. For as long as she leans on her wrestling, Montano returns to the winning column.

Danny Chavez is a former Global Legion featherweight champion who also fought for CFA, Fight Time Promotions, and XFN before joining the UFC. The 34-year old from Miami, Florida defeated T.J. Brown in his UFC debut but lost to Jared Gordon in his most recent bout.

The Columbian Warrior is 7-3 in his last 10 bouts. He has a record of 11-4 with three knockouts. Chavez is 5-8 tall with a 67-inch reach and fights out of the orthodox stance.

Kai Kamaka is a veteran of KOTC, PXC, Bellator, and LFA. He joined the UFC last year and won his debut against Tony Kelley, earning Performance of the Night honors. However, Kamaka has lost his last two bouts including a narrow split decision to T.J. Brown in his last outing.

Kamaka has a record of 8-4 with one win via submission. He is an orthodox fighter who stands 5-7 tall with a 69-inch reach.

Both these men have the tools to exploit their opponent’s weaknesses. Chavez’s straight hands and punching power are a concern for Kamaka who has a questionable chin. Meanwhile, Kamaka has heavy leg kicks and aggressive offensive wrestling which Chavez doesn’t fight well against.

This could end up being the closest bout in the event and I have no issues with you picking either fighter. Personally, I think Kamaka has the edge. Chavez is too willing to give up his back and doesn’t offer too much when taken down.

Unless Chavez lands something big and hurts Kamaka early, I think Kamaka takes this fight to the mat and ekes out a decision with better top control.

Jinh Yu Frey is a former Invicta FC and SCS atomweight champion. The 36-year old from Arkansas also challenged for the Rizin FC atomweight champion but lost to Ayaka Hamasaki at Rizin 16. Frey lost her first two UFC bouts but defeated Gloria de Paula in her most recent Octagon appearance.

Frey has a record of 10-6 with one knockout and two submission victories. She is a southpaw fighter who stands 5-3 tall with a reach of 65 inches.

Ashley Yoder was a contestant at TUF 23 where she lost in the elimination round. Despite the loss, she earned a UFC contract. Yoder lost her first three UFC bouts but is 3-3 since then. She is coming off a loss to Angela Hill last March.

Yoder is also a southpaw fighter who stands 5-7 tall with a reach of 69 inches. She has a record of 8-7 with four submission wins.

Yoder’s jiu-jitsu game is dangerous but her wrestling and striking have not been able to catch up. On the other hand, Frey has never fought to the best of her abilities and is often passive in her fights.

Frey’s timid pace has always failed to sway the judges. Because of that Yoder can win this fight by simply doing more than Frey. But then again, Frey’s left hand is more dangerous than Frey’s entire arsenal and she’s a decent wrestler too.

Both women can win this fight, depending on who pushes the pace. But I think Frey’s history of close decisions is going to work to her advantage here.

Ronnie Lawrence is a veteran of Valor Fights, Hard Rock MMA, and LFA. He joined the UFC last year and is 2-0 inside the UFC Octagon. Lawrence scored a third-round TKO of Vince Cachero in his most recent bout.

Lawrence has a record of 7-1 with four knockouts. He is a switch hitter who is 5-8 tall and has a reach of 68 inches.

Trevin Jones is the former PXC bantamweight champion. The 30-year old from Guam joined the UFC last year and knocked out Timur Valiev in his UFC debut. However, that bout was overturned to a no-contest after a failed drug test. He bounced back with a knockout win over Mario Bautista at UFC 259 last March.

Jones is 3-6 with three knockouts and four submission wins. He is a southpaw who stands 5-7 tall and has a reach of 70 inches.

Jones was losing both of his UFC bouts then boom, he scores a knockout. Aside from the obvious punching power, it’s hard to get a read on Jones especially since he was dominated before scoring the KO.

On the other hand, Lawrence has excellent wrestling which makes him stand out in a stacked division. I think he will dominate this fight on the mat and he also has the in-and-out striking technique to hold his own if this fight stays on the feet.

Jones needs that home run punch again here, otherwise, Lawrence is going to put the pace on him and wrestle his way to a victory here.

Ryan Benoit competed for Legacy FC, Shark Fights, and MFC before joining the UFC. He is 3-5 inside the Octagon and is coming off back-to-back losses to Alateng Heili and Tim Elliott. The 31-year old from San Diego lost via split decision to current flyweight champion Brandon Moreno in 2016.

Benoit has a record of 10-7 with eight knockouts and one submission defeat. He is 5-5 tall with a 68-inch reach and fights out of the orthodox stance.

Zarrukh Adashev is a former Asian and International hand-to-hand combat champion. The 28-year old from Uzbekistan fought under Ring of Combat and Bellator before joining the UFC. Adashev is 0-2 inside the UFC Octagon and lost to Su Mudaerji via unanimous decision in his most recent bout.

Adashev is 3-3 with two knockouts in his MMA career. He is a southpaw fighter who is 5-5 tall and has a reach of 66 inches.

Benoit has a 3.5 inches advantage in height and has some serious pop in his punches. However, his striking has never really fully developed so that he could make use of his punching power. He also doesn’t have a good takedown offense that is necessary to slow down Adashev.

Adashev is a former kickboxer and if this bout turns out to be a pure striking battle, this is an easy win for him. With Benoit unable to take this fight to the ground, he doesn’t have much chance here. Adashev is going to push a fast-paced slugfest and Benoit will be unable to keep up. In the end, Adashev’s cleaner blows and more telling shots will get him the judges’ nods.

Philip Rowe fought for promotions like RITC, V3 Fights, Battleground MMA, and Square Ring Promotions before appearing in the Contender Series where he scored a TKO over Leon Shahbazyan and earned his UFC ticket. He was beaten by Gabriel Green at UFC 258 in his UFC debut.

The 31-year old Rowe is 7-3 with three knockouts and four submission wins. He is 6-3 tall with a reach of 80 inches and is an orthodox fighter.

Orion Cosce fought under Bear River FC, URCC, and OFP Warrior Games prior to his stint at the Contender Series. He knocked out Matt Dixon to earn a shot at the UFC. The 27-year old Cosce will be making his UFC debut in this bout.

He has a record of 7-0 with six knockouts and one submission win. Cosce is a switch hitter who is 5-11 tall with a 71-inch reach.

Rowe has a massive advantage in height and reach so theoretically, he can fight from the outside and just pepper Cosce with scoring punches. However, he is vulnerable to pressure and that’s something that Cosce can implement with ease.

Make no mistake, Cosce is far from a finished product as a fighter but he has the tools to win this fight. Aside from his ability to put the pressure on Rowe, he also has an excellent offensive wrestling game in case Rowe tries to slow down the fight by taking it to the ground.

Either way, Cosce is the better fighter here and his toughness will carry him to victory.