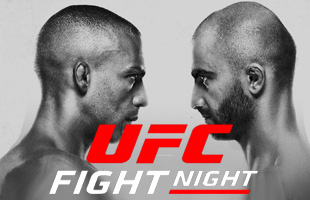 Fireworks are expected this Saturday at UFC Vegas 35 where the resurgent Edson Barboza meets Giga Chikadze in a battle between one of the UFC’s top knockout artists in the lower classes and a former GLORY standout.

The event will also feature the Finale of The Ultimate Fighter 29 middleweight and lightweight tournaments.

But before the main card begins, an exciting prelims undercard precedes the show. Let’s take a look at the fights in the curtain-raiser and make our predictions.

Alhassan fought at Bellator and the Legacy Fighting Championship before heading to the UFC. This 36-year old from Accra, Ghana joined the UFC in 2016 and won four out of his first five UFC bouts. But he’s dropped his last three bouts and is coming off a loss against Jacob Malkoun.

Judo Thunder has a record of 10-4 with all of his wins coming by way of knockout. Alhassan is six feet tall with a reach of 74 inches and is an orthodox fighter.

Alessio Di Chirico is a former IMMF light heavyweight champion from Italy. The 31-year old from Rome was 9-0 when he joined the UFC. He won three out of his first five UFC bouts but lost three in a row after that. Di Chirico ended his losing streak by knocking out Joaquin Buckley in his most recent appearance.

Di Chirico is 13-5 with six knockouts and four wins via submission. He is an orthodox fighter who stands 5-10 tall and has a 73-inch reach.

Alhassan fights usually end two ways: He knocks out his opponent or his gasses out trying to and loses the fight. That might not work against his opponent here.

Di Chirico is durable enough to withstand Alhassan’s early storm. He’s fought with hard hitters like Julian Marquez and Joaquin Buckley and stood his ground. He’s going to do the same here and start taking over once Alhassan begins to slow down. Di Chirico weathers the storm and wins the last two rounds.

Sam Alvey is a veteran of Bellator, King of Cage, and MFC. He was also a contestant at The Ultimate Fighter: Team Carwin vs Team Nelson where he lost in the first round. He joined the UFC after winning the MFC middleweight title in 2013 and defending it the following year.

Alvey has a record of 33-15 with 19 knockouts and three submission losses. He is winless in his last six bouts and is coming off a submission loss against Julian Marquez last April. Alvey is a southpaw who stands 6-2 tall with a 75-inch reach.

Wellington Turman started his career in Brazil and fought mostly at Immortal FC before joining the UFC in 2019. The 25-year old from Curitiba, Brazil has won just once in four UFC bouts and is coming off a loss to Bruno Silva.

Turman is six feet tall with a reach of 72 inches and fights out of the orthodox style. His record stands at 16-5 with four knockouts and seven submission wins.

Alvey has excellent power and a very good takedown defense which should be very helpful against Turman who doesn’t have enough durability and striking abilities to hang with him. Alvey also has a significant advantage in height and reach.

Sure, Alvey has not won a fight since 2018. But Turman hasn’t really impressed in the UFC. With his career probably on the line, Alvey fights his best and guts out a win.

Dustin Jacoby is a veteran who competed for Bellator, WSOF, and Titan FC. He was also a GLORY kickboxer who was ranked 8th by CombatPress. Jacoby has not lost in his last five bouts with four wins and is currently in his second stint in the UFC. In his last bout, Jacoby figured in a split daw against Ion Cutelaba.

Jacoby has a record of 14-5 with nine knockouts and one submission win. He is 6-3 tall with a 76-inch reach and fights out of the orthodox stance.

Darren Stewart is a former Killacam Promotions light heavyweight champion who also fought under Cage Warriors. This 30-year old from England has only one win in his last five bouts and is coming off a unanimous loss to Eryk Anders in his last bout.

Stewart owns a record of 12-7 with seven knockouts and one submission victory. He is an orthodox fighter who stands six feet tall with a 74-inch reach.

Jacoby dominates this fight from a distance but his takedown defense and gas tank could be an issue against Stewart who despite not having elite wrestling, can be aggressive on the mat. However, Stewart may not have the size at 205 to implement that.

Although he won’t be totally outclassed here, Stewart will have trouble getting enough shots to make a case for himself. Jacoby can win this fight by point-fighting from a distance. I say that Jacoby wins this fight behind his jab and sprawl-and-brawl.

Jamall Emmers fought under Hero FC, RFA, and LFA. He joined the contender series in 2018 but was knocked out by Julian Erosa. Since that loss, he won five out of his last six bouts, losing only to Giga Chikadze. Emmers decisioned Vince Cachero in his most recent bout one year ago.

The 32-year old Emmers has a record of 18-5 with seven knockouts and three submission losses. He is 5-10 tall with a 74-inch reach and fights out of the orthodox stance.

Pat Sabatini fought under CFFC and CES MMA before joining the UFC this year. Sabatini defeated Tristan Connelly via unanimous decision in his most recent bout. The 30-year old from Bristol, Pennsylvania 6-1 with four stoppages in his last four bouts.

Sabatini is 14-3 with two knockout wins and nine victories via tap out. He is 5-8 tall with a 70-inch reach and fights out of the orthodox stance.

Emmers has the length, pace, and wrestling to dominate this fight. However, he’s also shown lapses that have turned winnable fights into losses in the past. He can’t afford to commit those mistakes against Sabatini who has good pop on his punches and a lethal submission game.

I think this will be a competitive bout from start to finish. However, I think that Emmers’ takedown defense, dangerous clinch, and the better gas tank will be an advantage and those are what will carry him to victory.

Mana Martinez is a veteran of Fury FC and LFA. The 25-year old from Houston, Texas has lost just once in his last eight bouts and that was a submission defeat against Drako Rodriguez at the Contender Series. In his last bout, Martinez scored a TKO win over Jose Johnson at Fury FC 46.

Martinez is 8-2 with eight knockouts. He is an orthodox fighter who has a reach of 70 inches while standing 5-10 tall.

Guido Cannetti fought in Brazil and Argentina before joining the UFC in 2014. He was a competitor at the TUF: Latin America where he lost to Alejandro Perez in the semifinals. The 41-year old from Argentina is just 1-3 in his last four bouts and head to this fight after losing to Danaa Batgerel at UFC 248.

Cannetti is 8-5 with three wins via knockout and three via submission. He is 5-6 tall with a 68-inch reach and is a southpaw fighter.

Cannetti is a 41-year old brawler who has not developed his striking technique to make up for his lack of ability. But he will all sorts of trouble against Martinez who is an excellent counter-puncher who has plenty of pop in his punches.

The best chance for Cannetti is to turn this fight into a boring wrestling contest so he can negate Martinez’s striking prowess. However, that will only work if Martinez gives up his solid takedown defense to look for submissions. Otherwise, Cannetti gets caught and dropped after missing on a punch.

JJ Aldrich fought under Invicta FC before coming to the UFC. The 28-year old from Denver, Colorado was a quarterfinalist at the TUF 23 tournament. Aldrich lost her UFC debut but has gone 5-2 since and is coming off a win over Cortney Casey.

She is a southpaw who stands 5-5 tall with a reach of 67 inches. Aldrich has a record of 9-4 with two knockouts.

Vanessa Demopolouos fought most of her career at LFA. She joined the Contender Series last year but lost to Cory McKenna. Demopolous won her most recent bout against Cynthia Arceo at LFA 103.

Demopolous has a record of 6-3 with one knockout and three submission losses. She is 5-2 tall with a reach of 59 inches and is an orthodox fighter.

Demopolous has dangerous and innovative grappling and she also fights with good aggression. She’s never out of a fight and can spring out a crazy submission out of nowhere. However, she’s in for a tough fight here.

Aldrich has a huge advantage on the feet with her massive reach and technical striking. Demopolous’ wrestling isn’t as polished and that will take away her submission threat. Unless Aldrich gets caught after getting lazy on the ground, this should be a one-sided striking clinic for Aldrich.