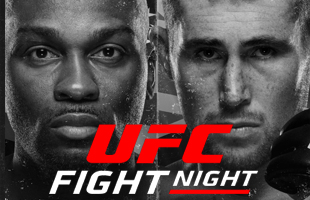 UFC Vegas 36 was supposed to be held in London but the UFC made the decision to move the fight to Las Vegas. That forced several fighters to withdraw due to visa issues while others were removed from the bout due to injury.

Despite losing fighters, the show goes on as Darren Till and Derek Brunson square off in a pivotal middleweight bout between Top 7-ranked 185-pound contenders in the featured bout of the evening. In the co-main event, Top 15 heavyweights Tom Aspinall and Sergei Pavlovich face off in an attempt to move up the ladder.

Julian Erosa is a former Cagesports featherweight and lightweight champion. The 32-year old from Seattle, Washington was a competitor at The Ultimate Fighter 22 tournament where he lost to Artem Lobov in the semifinals. Erosa is in his second stint with the UFC and is 2-1 during this period.

Charles Jourdain is a former TKO Major League MMA featherweight and interim lightweight champion. The 25-year old from Montreal, Canada joined the UFC in 2019 and has posted an Octagon record of 2-2-1. He is coming off a TKO win over Marcelo Rojo last March.

Jourdain has a record of 11-3 with 8 knockouts and three submission wins. He is 5-9 tall with a reach of 69 inches and is a switch-hitter.

Erosa only knows one way to fight and that is to stand and brawl until he or his opponent is knocked out. That’s going to win him a lot of fans but it won’t be enough to get him a win here.

Not only does Jourdain have more punching power, but he also has a better gas tank than Erosa. Having said those, Erosa’s style falls right into Jourdain’s strengths.

I think Erosa’s only chance here is to try and wear Jourdain down with his wrestling. However, Jourdain has good cardio and scrambling skills which will help him if Erosa takes the fight to the mat.

Jourdain keeps the fight on the feet and after one round, he begins to dominate and force a stoppage.

Dalcha Lungiambula is a former EFC light heavyweight champion and a former ADCC Submission Wrestling world champion. The 36-year old from the Democratic Republic of Congo joined the UFC in 2019 and has gone 2-1 in three UFC bouts. In his last fight, Lungiambula defeated Markus Perez via decision.

Lungiambula is 11-2 with 5 knockouts and one submission victory. He is 5-8 tall with a reach of 76 inches and fights out of the orthodox stance.

Marc-Andre Barriault is a former TKO middleweight and light heavyweight champion who also won the Hybrid Combat middleweight title. The 31-year old from Quebec, Canada joined the UFC in 2019 after accepting an invite from the promotion. After losing his first three UFC bouts and coming up with a draw in his fourth bout, Barriault defeated Abu Azaitar at UFC 260 to pick up his first Octagon win.

He has a record of 12-4 with nine knockouts. Barriault is an orthodox fighter who stands 6-1 tall with a reach of 74 inches and fights out of the orthodox stance.

This is a fight that will pit Lungiambula’s grappling and raw power against Barriault’s aggression and volume. While Lungiambula has enough power to put the light outs, he doesn’t put up the amount of volume that will knock out the durable Bariault.

Lungiambula’s offense is too sporadic and Barrault should be able to outland him two punches to one to win the striking battle. If Lungiambula takes this fight to the ground, Barriault has improved in his ability to get the fight back on the feet so which limits Lungiambula’s grappling edge.

For as long as Barriault keeps this fight in the stand-up, he should be able to control the fight and win on points.

Jonathan Martinez fought under XFL, Fury Fighting, Combate Americas, and Fist Fight Night before joining the UFC in 2018. The 27-year old from Los Angeles, California lost his UFC debut against Andre Soukhhamthath, he was won four out of his last six bouts. However, Martinez is coming off a knockout loss to Davey Grant.

Martinez is a southpaw who stands 5-8 tall and has a reach of 70 inches. He has a record of 13-4 with seven knockouts and four submission wins.

Marcelo Rojo is a veteran of Combate Americas who also fought for XFCI, ACB, and Arena Tours. He joined the UFC this year but lost to Charles Jourdain in his UFC debut last March. Rojo is just 3-3 in his last six bouts after a five-bout winning streak.

He is 5-8 tall with a reach of 71 inches and fights out of the orthodox stance. Rojo has a record of 16-7 with 8 knockouts and 6 submission victories.

Rojo was supposed to fight Kevin Croom at UFC Vegas 35 but instead ended up taking this fight on short notice. He’s going to have his hands full against Martinez who owns one-shot knockout power and the better striking technique between the two.

Rojo will try to slow Martinez down by damaging his lead leg but the latter has been able to stay on the front foot against forward-moving bruisers.

Unless the knockout loss to Grant has changed Martinez’s confidence or affected his chin, he has more than enough in his bag to outclass Rojo.

Molly McCann is a former Cage Warriors Fighting Championship flyweight champion. The 31-year old from Liverpool, England is also a former Shock n’ Awe flyweight king who joined the UFC in 2018. After opening her UFC career with a 3-1 record, she had dropped back-to-back fights against prospects Talia Santos and Lara Procopio.

McCann is 10-4 with four wins via knockout. She is 5-4 tall with a 62-inch reach and fights out of the orthodox stance.

Ji Yeon Kim is a former Jewels and Gladiator women’s bantamweight champion. The 31-year old from Incheon, South Korea joined the UFC in 2017 and has posted a 3-3 record inside the UFC Octagon. Kim is coming off a loss to Alexa Grasso in August 2020.

Kim is 9-3 with two knockouts and three submission wins. She is an orthodox fighter who stands 5-7 tall with a reach of 72 inches.

Looking at the odds, this is the closest bout in the entire fight card and it definitely looks like one that can go either way.

McCann has better footwork and she has more weapons. Kim meanwhile, has the edge in size and punching power. However, I like McCann to win the battle on the feet because Kim’s striking defense has more holes.

Kim’s shaky takedown defense could also become a target for McCann who may not be an excellent grappler or wrestler but has the chops to take her opponent down.

I like Kim to land her power shots on McCann. But the latter survives by taking the fight to the ground when she feels threatened. With that kind of control of the fight, I’m going to have to roll with McCann.

Jack Shore is a former Cage Warriors bantamweight champion. The 26-year old Welshman signed with the UFC in 2019 and is a perfect 3-0 inside the UFC Octagon. In his last bout Shore defeated Hunter Azure via split decision to retain his unbeaten record.

Shore is 14-0 with four knockouts and eight submission wins. He is 5-8 tall with a 71-inch reach and fights out of the orthodox stance.

Liudvik Sholinian fought in his native Ukraine before joining the Bellator, LFA, Gladiator State Challenge, and LXF. This 31-year old from Kiev has won four out of his last five bouts but heads to this contest after an appearance in the TUF 29 show where he was a late replacement and where he defeated the top-seeded fighter in the tournament.

Sholinian is 9-1 with one knockout and three submission victories. He is an orthodox fighter who is 5-10 tall with an undisclosed reach.

You have to give credit to Sholinian. After stepping on short notice at the TUF tournament, he defeated top pick, Mitch Raposo, in the quarterfinals. However, his success came to an end when he was beaten by eventual winner Ricky Turcios in the next round

With Shore’s opponent pulling out of the bout due to visa issues, the UFC asked Sholinian to step in once again and he agreed. Props to him but Shore just looks better anywhere you look at it. Shore is the better striker, has a better submission game, and also has the edge in wrestling.

I think Shore outclasses Sholinian and finds his neck late during the second half of the bout.